On the heels of releasing their latest EP, Ubcmusic Vol. 2, UBC Waco's Jameson McGregor took some time out of his busy schedule to chat with JFH's Christopher Smith about their new songs...
This interview took place in December, 2019.


Jameson McGregor: Ubc was started in 1995 by a couple of college students, one named Chris Seay, the other David Crowder. They were trying to create a different sort of church situation and a part of that was finding a different way to do music-mostly through reimagining hymns and writing original stuff. As you likely know, David Crowder eventually became a famous person, and the music that was being written for Ubc was no longer just within our walls. I feel like there are many threads we could trace to think about our music output, but looking at the beginning is probably sufficient: we have been trying to find words to make sense of God, our neighbor, and ourselves for about 25 years.

Jameson: We're a pretty small staff (4 full-time pastors), so my duties are pretty varied. I'm in charge of music and liturgy on Sundays-I either write or curate everything that isn't the sermon. Part of the music side of that is songwriting-it's literally in my job description-which is great. As we began to sing more and more original songs, recording became more of a primary role as well (since people wanted to be able to sing, listen to, reflect upon, etc. our songs outside of Sunday morning). Beyond that, I'm in charge of Sunday School, aesthetics, "Young Professionals," making sure we have decent coffee on Sundays, random maintenance things, non-Sunday liturgical gatherings, open mic/open wall shows, and the general pastoral care of whoever needs it. Dream job. 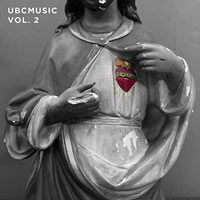 Jameson: I think all of these songs were lyrics first-that's typically how my process goes. I usually write with a guitar in hand, but just sort of play chords and sing gibberish until I find a few words that can form a line or a theme. After I've got that, I start working on the lyrics and the sections of the song begin to emerge. Its usually after I've got a handle on the lyrical structure that I start thinking about the actual chord structures. Once each of these songs got to that stage of writing, I started playing them acoustic at church, then continued to prototype different versions for a few weeks, and finally ended up in the studio with versions that were finished enough to begin building out with other instruments.

Jameson: I didn't really set out to have the choruses differ. The second chorus was actually the first part of the song I wrote, but when I got around to the earlier part of the song, there were just some different images that felt appropriate. I had a vague sense of what I wanted to explore in the song and just sort of started writing until something emerged. There was another verse in the song at one point-right after the first chorus, but I ultimately didn't think it was necessary, so I scrapped it. The song existed for 8 months or so without the outro. It used to end after "all-creation misfit family band of everything," but I kept playing at sound check one day and came across the last bit. This was a song that sort of unfolded over time, and while I worked really hard on it, I by no means feel like I have a good grasp on why it is the way it is. It was just a song that we needed and it showed up.

Jameson: There were a few differences. The first would be that it wasn't our first time in the studio together. Vol. 1 gave us some valuable experience, and we basically left the studio already thinking about Vol. 2. The second would be that we felt a lot closer to these songs than we did the collection on Vol. 1 Third, and probably most importantly, four of the five songs had essentially no prior life as full band songs. This meant that we were deliberately arranging them as a group, instead of trying to decide if we had to part ways with parts that we had cared about in the past or something.

Jameson: I believe it was in 2012 or 2013 that one of our former pastors asked a local band called Lomelda to play a verse of In the Night each week during Lent. I'm pretty sure they just did it for a few weeks-I don't actually remember now-but it was a compelling enough concept that I picked it up when I was hired in 2015. From there, it evolved into beginning Lent 1 with just an acoustic guitar and the first verse, then adding an instrument and a verse each week until Easter. Drums are the last thing to be added (hence them making an appearance only at the end of the song for the Resurrection sequence), and we sometimes joke that ubc gives up drums for Lent.

Jameson: There are a couple of answers to that question. The first is that I default to playing songs pretty slow anyway. The other, more substantial would be that I hadn't heard the original song until we were a couple of years into playing our version. I had a general sense of the melody from when Lomelda had covered it, but we just sort of built it out to fit the mood of the lyrics and the context of the Lenten season. Left with the lyrics alone, a slow burn just felt like it captured the mounting hope-in-despair that the song traces.

Jameson: I remember being really happy when we got the end of "Eternal Anchor" set. We had been planning on doing some kind of group recording for the end of that song, and sort of spontaneously plugged in a couple of mics before our service one Sunday to just record the congregation live. We didn't know if it would work, but it did. It was nice to have the misfit family band image go from something kind of abstract to this misfit family band.

Jameson: I read quite a bit-mostly fiction, theology, and poetry. I think having a regular intake of words and images helps me create. I also spend a decent amount of time gardening-my wife has a colossal flower garden (mostly roses), and there's never a shortage of work to be done there. There's a sort of clarity and calm that comes from that sort of work that I find essential to creativity. I also spend a lot of time studying artists that I respect, listening to them talk about creativity and process, and internalize that quite a bit.

Jameson: I'm way behind on movies, so I don't yet know what my favorite movie of 2019 is. My favorite album of 2019 was Phoenix by Pedro the Lion. The "why" of that is that I am a massive fan of everything David Bazan touches. Additionally, I think it's a model case study in reckoning with our roots, the passing of time, and relating meaningfully and empathetically to previous versions of ourselves.

Jameson: After we released Vol. 2, we started working on a couple of Advent songs. These are the first songs we've recorded ourselves, and we had a great time doing it. Now that those are out, we are gearing up to start recording a full-length record to release (hopefully) in late 2020.