During GMA Week in Nashville, Jesusfreakhideout.com had the pleasure of grabbing some time with producer extraordinaire Aaron Sprinkle - and front man of the band Fair - to discuss his production career, the upcoming Fair sophomore release, and one of his most recent production projects, The Almost's Monster Monster...
This interview took place on: 4/22/09.


Aaron Sprinkle: It's kind of subject to my schedule, the band's schedule. And usually, bands approach me and then if I feel like it's a good match, then I'll go with it. It kind of just happens sometimes, y'know? *laughs* Like, "This band wants to work with you." "Alright, cool!"

Aaron: I started doing recording and producing as a way to record my music. It wasn't really something I ever looked at as a career option. Even for awhile when I was in Poor Old Lu, not really making any money from the band and getting a few jobs where I was making some money doing recording, I still saw it as the hobby - the recording part. Then everything just kind of flip-flopped on me. *smiles* I did learn pretty quickly after being in a band on a label that the part I liked the most was making the record.

Aaron: Yeah, there's something magical about being in a studio and I still get those same feelings now as I did when I was making my first record.

Aaron: Well, the first few things that I did weren't really me, but whatever band I was in at the time. Or friends that were in bands. That's actually really how it started. When I was 18, I had the opportunity to kind of work out of the studio at my church. Friends started hearing about it and they were like, "Oh, do you want to record us?" And I said, "Oh yeah! I guess I could do that?" It had never really occurred to me to do that. And eventually some of those bands got signed - y'know, MxPx and Grammatrain, stuff like that.

Aaron: I did Lonely House.

Aaron: Yeah! That's awesome! So what happened was they were like, "You wanna do our record?" And I was like, "For the label?! ...OK!" So that was kind of where it started. My band Fair just played a show with Grammatrain. They did one show in Seattle and one show in Germany.

Aaron: No. Pete borrowed a guitar amp from me, but that's about it. *laughs*

Aaron: I don't know. We've talked about it. It would just have to make sense. We don't want to do it just to do it. *smiles*

Aaron: Yeah! We're real close to finishing it. It's hard with my schedule sometimes to fit it in, but yeah, it's really close. It should be done by the end of the Summer.

Aaron: Yeah! I'm really excited about a little bit of different stuff that we did. I wrote a bunch of the songs on piano which I don't do a lot of, so they have a little bit of a different flavor to them. There's a ton of keys on the record. It's a little more dynamic of a record, I think. Some real mellow parts and some real rockin' parts. I think it'll be fun. I'm excited about it.

Aaron: Yeah, I don't think it's going to throw people at all, but it'll definitely be a different flavor of what it is we do.

Aaron: Um, yeah... but I don't even know how many of them have names, so... they're all working titles at this point. That's always how I do everything. *smiles* Naming the song is the last thing in the process. There are two songs that are actually completely finished - mixed and everything - we'll be pre-releasing those in some form or another in the next few months.

Aaron: Yeah! I was actually talking to somebody else about that today. Jonezetta, Cruel To Be Young is one of my favorite records I've ever worked on. Unfortunately, not very many people have heard that record. And it's really one of those records that I actually listen to and am like, "Wow, I can't believe I was a part of that. I love it so much." The new Copeland (You Are My Sunshine) record is definitely one too. Corey Crowder, Gold And The Sand, I really like that record. There's a lot of records I worked on that I really like. Acceptance, Phantoms, I love that record. But looking back on at least the last six or seven years, I feel really privileged having been able to work with the people I worked with. Everything I like. It's always fun to go back and listen to something and go, "Oh yeah! I forgot about that" or "I forgot about that little part that we did."

Aaron: Yeah! There's definitely been projects that are more that way. Every project is different in how prepared people are and what they're bringing to the table. It's hard for some bands. It usually kind of comes to fruition on their second record because they're touring for the first time - and they're touring a lot - and go, "Oh my gosh! We need to make another record but we don't even have any songs! A couple riffs or whatever, we don't even know what to do!" But everybody that works with me kind of comes to me for different reasons. Some people really want a TON of input, a co-write, and play a ton, and sing even, and other bands come to me for kind of a different reason - to just kind of oversee and make sure their vision is what ends up being the final product.

Aaron: No, it's fun! I think that's one of the things that keeps it interesting - all the diversity and the different roles I play, the different aspects of it. It's really fun. And I try to keep it fun. If it wasn't fun, I wouldn't do it. I mean, I wouldn't have been doing it this long! I didn't make any money for the first ten years that I did it!

Aaron: No! It was the opposite of a job for awhile there! *laughs* So you gotta keep it fun and you gotta do different types of music. All different things, y'know? Like the record I'm doing out here, that's why I'm here, is the new Almost record. That's just gonna be so fun. They were like, "What if we all left our comfort zones of where we live and went somewhere else and kind of camped out somewhere and make the record?" It just sounds really fun. I'm going to be here for two months.

Aaron: We haven't even started it yet! I just got here last night. I start Monday.

Aaron: As far as different from the last record?

Aaron: Well, for one, it's a real band now, more than it was. Before, it was just Aaron [Gillespie] and I in the studio. And this time around, he's got a band. They've helped with some of the writing even. And we really want to capture a band feel on the record. So that'll be fun. Some of the songs are a little different.

Aaron: Yeah! Totally! I mean, I think for the fact that it was all him, other than a couple little things, a couple little guest spots, it sounds pretty cohesive. It doesn't sound too disjointed and solo-like, but this will, I think, be a lot different when you really listen to it. It will have a different feel to it.

Aaron: Not so much the [concept videos]. I've worked on some live videos, as far as engineering and editing, cleaning stuff up. I've worked on that before. And then sometimes I have to do a different edit of a song for a video if they want a shorter version. I'll have to do that kind of stuff. But pretty much, I just get to watch the final product. *smiles*

Aaron: Yeah! I would say there's a few. I mean, before I really started working in the capacity that I am with Tooth & Nail, I actually had worked with quite a few female artists and I really haven't done much of that. Eisley's pretty much it and I've really only done a couple songs with them, so that's something. I listen to a lot of female artists, and I would love to do more of that.

Aaron: There's a band that's really new and young that I'm trying to get to work with right now that would be really awesome. They're called Poema. And they're from New Mexico, I think. And I'd love to work with Eisley again. That was fun.

Aaron: I did a song that ended up on their last EP before their full-length but then it was also on that full-length. It was remixed and put on the full-length. And then I did another song that was like an iTunes-only single or something. But I've known them for awhile, since like 2001 or something. And then I'd also love to do like a real-deal country record.

Aaron: Yeah, I'd like it to be more old school in the sense of not super modern country. Just really good songs. Even more than Americana, [but] actual, real country. That would be really fun.

Aaron: I have no idea when it comes to that. It's a whole scene that I don't really know anything about. There's little pockets of it, even in Seattle there's a little country scene of local bands. That's it's own little thing. 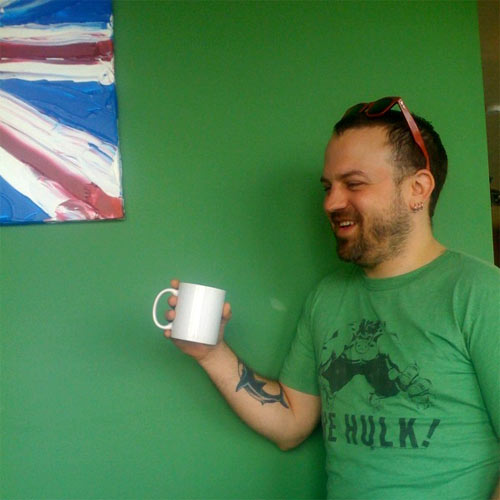