Since its inception in 1996, All Star United, driven by its frontman Ian Eskelin, has been rocking the globe with their fun and honest music that is easy to receive. In 1998, they released their second album International Anthems for the Human Race, and in 2000, left home label Essential Records with a parting hits album (after just two records) entitled Smash Hits. Since then, fans have been waiting for new material from the guys and in 2002, Ian answers the call with ASU's Revolution. We caught up with Ian who was gracious enough to answer the following questions.
This interview took place on: 6/1/02.

Ian Eskelin: I think the question should read where haven't we been? The world is a big place with many countries to play. And while we did take a much-needed short hiatus from massive touring, we never really stopped playing gigs or writing songs. So, we are thrilled with the release of our new project Revolution and excited that we have a whole bunch of new songs to play.

Ian: When I started ASU six years ago, it had one major philosophy - tour tour tour - endlessly. It wasn't uncommon for us to average close to 200 shows a year. After a while of relentless touring, some previous members decided to do other things than ride around on buses, and check into hotels. I have been blessed to be able to travel with my best friends all over the world, and that is something that continues to this day with Matt, Jeremy, and Mike.

Ian: I have known the Delirious? guys for some time, and have respected how they run their whole operation. Just over a year ago, after a show in England, my old friend and Furious? records guru Jonathon Brown and I started talking about the future of ASU. It all made sense and the rest is history.

Ian: Yes, over a couple of years I had written about 30 songs, but knew I only wanted 10 on the record. I wanted to trim the fat and make a concise listen-able CD with no tracks to skip. We also went in the studio with the idea not to overproduce. Most of the songs were recorded in one or two takes and I think you can hear the honesty in them.

Ian: In my fast-paced life, it's easy sometimes to just cruise on auto-pilot and leave God out of the picture. But, Jesus wants our relationship all the time, not just when we need something, or times are bad. Sometimes it takes an effort to spend time with God when things are going good. "Sweet Jesus" was written on my roof-top in Nashville, and it's an actual moment of getting reaquainted with my best friend, Jesus.

Ian: I believe that God puts certain people in our lives to help us make it through. For some people, that person is a spouse or maybe just a good friend. When an earthly relationship is centered on Christ, it creates an amazing heavenly bond. It is nice to know that kind of relationship will follow us into eternity.

Ian: I really like "Sweet Jesus," because it is a very personal song that was written from the heart. However, I have a soft spot for the rockers like, "Kings and Queens," and "Weirdo." Idon't have a fave ASU song, but I really enjoy playing "Beautiful Thing" live.

Ian: I have a lot of friends and family in the NY/NJ area, and that day was surreal. I was at home in Nashville watching the news and could not believe my eyes. The song "Global Breakdown" talks about my feelings on that day.

Ian: It is great to have a partner to share life with. My wife Peggy is from NJ, so the biggest change for me has been her attempt to turn me into a knowledgeable Yankees fanatic. But, she doesn't realize that I don't like hockey.

Ian: I saw them both. Star Wars was great, and I dis-liked Spider-Man. But, then I'm a sucker for true stories.

Ian: I'm actually answering these questions in the back of a van headed towards tonight's show in Glasgow. It's feels incredible just to get back the basics of ASU. I love doing sweaty shows with tons of fans having a great time. We've been playing 35 minutes a night, which has been a lot of fun because we don't have to pace ourselves. We can go all out every gig.

Ian: This week I like Spy Game, Made, and American Movie.

Ian: There are too many to count. Call me crazy, but I really like those international flights over 10 hours cause I can catch up on all the movies I've missed. LA to Auckland is a good one.

Ian: I write songs for other people.

Ian: I quite liked Fold Zandura. 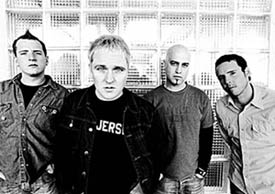