With his eighth studio release a few months away, Jesusfreakhideout.com caught up with BEC Recordings solo artist Bebo Norman at GMA Music Week to candidly discuss the artist's past, present, and future work...
This interview took place on: 4/21/08.

Bebo: Yeah, and I'm excited. It comes out September 16th

Bebo: No, I may actually do a self-titled. I was having lunch with Tyson, who's the head of my label. We were talking about record titles, and I was like "I've got nothing, I can't think of anything."

Bebo: Well with the song titles, there's a couple that could work, but I kind of like titles that represent the whole record. I haven't gotten there yet.

Bebo: *laughs* Exactly. No, but I just haven't gotten there yet in terms of what the real theme of the record is. Partly because we've sort of done this record differently, which I'm really excited to do it this way, but we split it in two. I went in and wrote my first batch of songs. I normally write exactly what I'm going to record. If I write ten songs, we record ten songs. We go in, record them, mix them two weeks later and then you're done. And then a month later you're like "Oh, I should've put that in a song." I mean, you just have second thoughts or whatever. The way we approached this one, I wrote eight, nine, or ten songs maybe and we picked our favorite five. Some of those nine or ten will still be on the record. We picked our favorite five, including the ones we thought could be radio singles. We went in and tracked those and mixed them. We treated them like a whole record. We just finished that last week, so we're going back in now. We're back in the phase of writing again. We'll take the first half of those songs and say "Ok, how's this shaping up? How does this feel? What's missing? What else needs to be communicated, what else can we write to fill in the gaps?" And so the idea is just to have some breathing room. We'll go back in three weeks and track and mix those and we'll get them all mastered and make the record.

Bebo: I'm producing it with Jason Ingram, the guy I did my last record with, which is really just by default. We just have started writing together a lot. We make work tapes, which are kind of our ideas of where we want the production to go. It's just turned out that way where the management, every time they get the work tapes, they're like "You know what, we kind of like where this is going, so why don't we all take it and run with it."

Bebo: That's a good question. I recently signed a new deal with BEC Recordings. My time with Essential Records was really great and I loved it, but I started with them when they were kind of a boutique label, kind of small with just me, Caedmon's Call, and Jars of Clay. I talked with them about doing another deal, but they're just a big label now. That's not a bad thing, but in terms of my mentality, when it comes to playing and making music, I love the idea of just thinking outside the box a little bit. I guess this is my eighth record or something like that, so I just want to make something where I kind of stretch myself a little bit. If I make the same record over and over and over, I just don't feel like I'll be interested enough to keep playing music.

Bebo: Not dramatically different, but it's more of an extension of that. That kind of went in a little bit of a different direction, and the new record takes a little step further. Which, for me, is interesting because I'm interested in just keeping things interestingdid I say interesting like 50 times? *laughs* So, all that said, it's keeping me engaged. It's been a really fun thing for me to stay engaged that way. So we'll see. But the beauty is, I don't feel the pressure to make a certain type of record on any level. I'm excited to make this record what it is and make a completely folk record later. We've even thought of doing a b-sides record that would come out six months after this. We haven't even talked to anybody about this other than my management.

Bebo: Yeah, maybe we could release it digitally or just in a sleeve that's packaged with the record six months later. It would be acoustic versions or work type versions really kind of raw out-of-the-studio type stuff. We're not sure how we'll package it yet.

Bebo: Yeah, for sure. A lot of the pre-marriage Bebo was being written out of loneliness a lot of times. That was sort of that season in my life. It wasn't like I walked around with my head down the whole time, but I definitely struggled with that in the sense that I was just constantly in this world of strangers playing shows. I really had begun to lose a sense of community and home and that part of my identity began to be lost. Even though I had these really rich relationships from the past, I wasn't engaging in them.

Bebo: Yeah, thank you, I definitely felt that way. The truth is, when I sat down to write for the last record, I was for the first time ever in a season where I felt really peaceful. I felt comfortable in my skin and I felt like I was being given life starting with my marriage but really just with these handfuls of relationships that had become the center of my world, meaning in a healthy way that they had become my community for the first time. And I had community for the first time. That became a huge deal to me in terms of how I began to look at where my identity is and where I draw life from. I sort of lived and died by music for a long time by how people responded to me. The dilemma and great irony of being creative is that it feels like a full forced balance against insecurity. The creative and the insecure come together a lot of the times.

Bebo: "You're rejecting me," yeah. Yeah, so all that to say, I was in that season when I started writing for the last record of really being peaceful. I talked to a lot of friends about it and kind of sought counsel on this idea of writing out of peace. I've never really done that before, you know. So the whole last record and this record is kind of an extension of that as well. It talks about the peace that we're promised as believers with the reality that life is still a dark and difficult place. This planet is a hard thing to kind of surf your way through, you know what I mean? So now these songs that I seem to be writing are about balancing that feeling of peace with the fact that I'm watching friends lose their marriages, and I'm watching friends of mine struggling with addiction, and I'm watching people very dear to me on the verge of being sick and having cancer. I don't want to focus on the things that are just dark and difficult about that, but how do you balance those two things? That's really the dilemma of the last record and probably what ties the last record to this new stuff is that it still seems to be the theme, this idea that faith is a desperate clinging to Christ. The thing that's hard about my friends is that they love Jesus, and yet they're right in the middle of divorces. I'm asking those questions like, "How does that make sense with what we're promised?" That's what I mean when I say these songs are coming from a really personal place. It's interesting because it's almost like I'm writing from the perspective of the people I'm watching around me. I don't want to write happy, happy joy songs all my life, you know what I mean? Thematically, that's where this record is coming from. I keep coming back to this idea of faith being this desperate clinging and that it's not about anything that we really do as much as it is how we hold on. And maybe even more than that, how we're held onto. That kind of seems to be where these songs are coming from. I guess this new record is just a little more dramatic. Musically, it's a little more dramatic.

Bebo: Yes! Lots of operatic things. *laughs* I think part of what makes it more dramatic is that if I was playing a little acoustic part on an old record we would've made it a really acoustic song. And what we've done on this record is we'll take that and double the vocals and double the acoustic part so it gives it this kind of mysterious thing. We're not powering on a bunch of electrics. We take it to a bigger place instead of having it just stay as a straight folk song. Most of the songs were written on an acoustic guitar, so we're trying to mess with it a little bit instead of just letting it be a folk record. That's kind of been the fun of it for me.

Bebo: Yeah, totally. I'll be interested to see what people think. The thing about folk music is what you're really ultimately drawn to is the core of where the songs are coming from. If folks still find that, they'll still be able to grab a hold of that and take comfort in the fact that that's still there. I'm definitely stretching things a bit too. 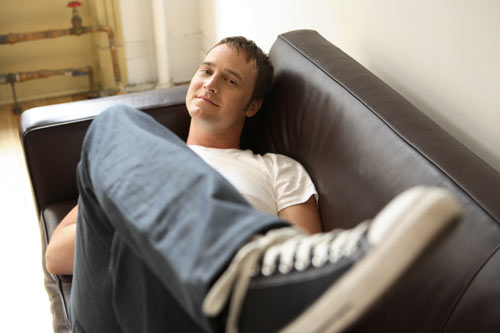