On February 24, 2006, JfH writer Andrew Shaw had the chance to interview Sparrow Records recording artist Bethany Dillon backstage before her concert. Besides writing her own music and only being seventeen, her passion for the Lord is unmistakable, which influences her entire live show. If you haven't heard of Bethany Dillon, check our her sophomore offering, Imagination which released Fall, 2005.
This interview took place on: February 24, 2006

Bethany: Well I'm actually almost seventeen and a half, so...

Bethany: The truth is, we're busy a lot of the times, and yet (there are) only a few days a month I feel overwhelmed. I think because God is giving more and more peace about the fact that it has so little to do with me, and so much with Him pursuing things, and trying to increase himself. All of that, especially the thing with the movie, it could have been overwhelming, but the Lord just made it clear that I don't think He's too concerned with my song being in a movie, but just (people) knowing about Him.

Bethany: Very much. I actually support a missions organization called Gospel for Asia, and they work in the 10/40 window, which is mostly India, (specifically) with the Dalit people. Since I was about eleven, **There was a knock at the door, and Bethany's supper from Panera arrived** I wanted to be a missionary. So, yeah, my heart is definitely in that.

*laughs* Which is my favorite!

Bethany: Oh, no. Sometimes it's a fight to have a quirky song on a record, but the truth is, sometimes you gotta write songs for radio, and that's fine too. I think there's a part where it's like, you know, just respecting the vehicle of "the label" and all of that, but if I could, I would have a whole record of quirky songs. Someday I will!

Bethany: Ummthe reason I started playing guitar is Jennifer Knapp, because she plays guitar, and is a girl, and the only other person I'd seen play guitar was my Dad. So, you know, a 47-year-old man didn't really appeal to me when he played. So, her music was a big deal for me, and Sara Groves, I think she is the writer that I'd love to be someday.

Bethany: I started playing guitar when I was eleven.

Bethany: Oh gosh. We were on tour with him last fall, and I think he had too much fun. And we were like, "Are we really doing ministry, suffering for the Lord?" They're just a great family, he has a great band, even the people that do lights for him, and they all just have the greatest hearts. The show is a small part of what we do on tour, the rest of the day is what is fun for us.

Bethany: Panera is amazing! Probably my favorite song to sing right now is a song that is not even on a record, called "You Are On Our Side." I think probably for most artists, the newest thing they've written is the most fun because they aren't tired of it yet.

Bethany: My mom would kill me if I didn't say U2, so U2. Switchfootthey really have impacted the way I write. Definitely Caedmon's Call, I grew up listening to them - 40 Acres was like the coolest record.

Bethany: This guy, Clint Brown, he's a black worship leader and has this CD called In His Presence, and it's amazing. So I just put it on, and I just like want to run a marathon! So anyway, that's what I've been listening too. 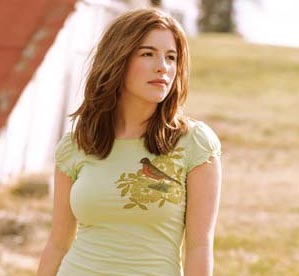