Its not often when you can use the term all time favorite for a band, for most its a once in a lifetime title. For myself, I could only use that idiom for the rock n roll Jedis of Bleach. Recently, I got a chance to sit in the van, listen to some records, and chat with Jerry Morrison, bassist from that said band. We talked of their new album Again, For The First Time, due out on August 27th, his brand new side project, and the reason why you probably havent seen him taking turns driving the bands van until recently. (by Blake)
This interview took place on: 7/11/02.

Jerry Morrison: If you liked bleach before, then I'm sure you will like the new album. It's not like we did this huge stylistic change or anything. We aren't a rap-rock band all of the sudden :) I think this is the record bleach has always wanted to make. It's pretty much a straight-ahead rock album. We stayed away from the "Nashville Sound" as far as production and mixing and things like that. The record does a good job of capturing what we do live.

Jerry: "Andy's Doin' Time" is a shout out to all of our families and people who are really close to us. We don't get to see our wives and families as much we would want, because we are gone so much. People think that being in a band is this glamorous thing, and in actuality, it can be rough being gone so much. The chorus of the song says "So I gotta move on and on into the sun," pretty much saying "Hey, it's really hard being away, but this is what God has called us to, so we press on."

Jerry: "Knocked Out" is a praise song about rolling with lifes punches. It's really easy to let life just beat you down, but when it does you just get right back up rather than letting it knock you out completely.

Jerry: T&N has been awesome so far for this record. Everybody over there really loves the record. I know we're gonna be on a Hot Topic sampler with a band called Sensefield. There is some other really cool stuff they are doing. I know they are planning a pretty big push for this record when it comes out. World domination!!

Jerry: Working with Oran was amazing. He really pushed us to be better songwriters. Oran just wanted to make a great sounding record with great songs. He really took us to the next level. Oh, and wait until you hear the new Flick stuff, it's amazing. It's less dark than the older stuff.

Jerry: I don't know haha. Our love of Star Wars maybe? Seriously, we're just honest with each other. There are no egos or secrets really. I think that really keeps all of us in check and that's really important when you spend as much time together as we do.

Jerry: When the five of us got together for the first time and played, something just clicked. It wasn't a calculated thing really. We are all on the same page musically, we like a lot of the same things, so when we write, it just kind of happens.

Jerry: Oh wow, thanks man. There really isn't much to tell actually. We did a tour with them awhile back and me and Hunz thought it would be fun to write some songs together. Right now it's just for fun. We only have one song done and we're working on another. It doesn't really sound like bleach or beanbag. So we'll see. We're both so busy, I don't even know when we'll finish it. Neither of us have any expectations at all. We're just letting it happen. We don't have a name or anything...

Jerry: Noise Ratchet, The Gravity Show, Denison Marrs, my next door neighbor writes country songs and he gave me a CD. I really like his songs a lot. :) Moss Eisley, Cool Hand Luke. Johnny Cash and Piebald have been very popular in our van lately. There are more I'm sure...

Jerry: You guys should really check out The Violet Burning. They put a worship CD that is amazing...

Jerry: This is true. What took so long? Oh, I don't know. Probably laziness.

Jerry: That's right. Way back in '94, my tenth grade year. One of the guys lived right behind me at the time as well. I just kinda started hanging with them. They pretty much took me in like a little brother. They are also the band that inspired me to play rock and roll.

Jerry: A whole lotta rock. Relient are great friends of ours so it should be a blast touring with them again. Philmore are awesome too. They are way too nice to play punk rock... And Holland are really close friends of ours. They live here in Nashville and we all hang out quite often.

Jerry: How about a mullet-hawk?

Jerry: I'm not famous so i think that disqualifies me. :) Later!!! 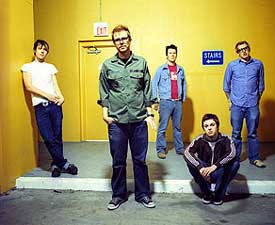