Metal act Demon Hunter are more than just your typical scream-filled rock band with guitar licks to break your bones. With a smart sense of the industry and a passion for Christ, Demon Hunter is one of those bands that just plain makes us proud. We recently caught up with Demon Hunter's chief songwriter and vocalist Ryan Clark to discuss their fourth record, Storm The Gates Of Hell...
This interview took place on: November 13, 2007

Ryan Clark: Yes. We had more time to write, and fleshed out each song in demo form before we entered the studio- something we had never done before. In addition to that, we had more time in the studio as well, so I think that helped immensely. I feel like we were more prepared than we had ever been.

Ryan: That year enabled us to really put our all into this record. It allowed us the time and attention to make STGOH the very best that we could. We have very busy lives outside of the band as well, so taking that time off from touring helped us maintain our sanity. I feel that we function very well as a band because of our ability to dictate our schedule. We don't get burnt out - and because of that, I could see this band continuing for years and years.

Ryan: Great. We don't get much guff about our beliefs. There are, of course, snide remarks made in the occasional album review, but that's because music journalists are critics first and music lovers second. That's why they usually lead with "Christian Bible thumpers Demon Hunter..." because they'd rather review our beliefs than our music. But in the larger scope, we've received nothing but respect from the mainstream- bands and fans alike.

Ryan: I have tons and tons of examples. I have an email folder jam-packed with letters of thanks and encouragement for what we do. I received one the other day where the guy said something to the effect of "it's ironic that the very medium that pulled me away from God, would one day draw me back," meaning heavy metal, of course. For people to think what we do can't be positive is completely ignorant- and really, really insulting to the people that have been touched by Christian metal. People have come to Christ through what we (and bands like us) do. How can you argue that? Some people live in little bubbles of false security and naivety, and it's unfortunate that they can't see what's happening on the outside- because it's pretty amazing.

Ryan: I think Christianity is (dare I say) bastardized by some Christian bands. Many bands start out with a mission of ministry and as soon as they go out into the "real world," they find themselves unprepared for the temptations and trials that come their way. I'm not just talking about young kids either. There are plenty of adults that I've seen fall hard and ruin their lives and the lives of others. I'll go on record here saying there are some absolutely TERRIBLE people active in the scene, masquerading as Christians- singing "Christ-based" songs to kids every night. I can be a very forgiving person, but I'm also very disgusted by what I know and see in the scene- to the point where I struggle with hate in that area.

Ryan: The song is about cutting or self-inflicted pain of any kind really. I wrote it specifically for girls, actually, but I hope it may reach some males that deal with this as well. The lyrics actually used to say "she" everywhere that there is now a "you." In actuality, it's not inspired by something specific that I knew or heard about. All I knew is that it seemed to be this increasingly popular way of dealing with pain for younger kids these days. In essence, it interested me, because I've never dealt with that sort of thing myself, and I wanted to understand it. All I could think of, was that Christ took on all of our pain so that we wouldn't have to deal with it. I understand pain, but I also understand that redemption and sacrifice overpower pain.

Ryan: "No Reason To Exist" is about young adults that have willingly and pridefully taken on a lifestyle of street living. There is a trend in which kids that come from middle or upper class homes choose to live homeless, jobless and reckless. It just struck me as insulting- to people who have no choice but to live that way. I think these people see it as a fun and carefree alternative to living responsibly- and it's easy for them, because if things get REALLY tough, they can just run back to mom and dad's house. I know enough about this "scene" to know that many of these kids are not living these hard lives out of necessity, but rather because of the music, fashion and careless attitude that accompanies the lifestyle. It sounds insane, and every last one of them would argue that those things have nothing to do with it, but if that were the case, they wouldn't all have matching outfits with hand-sewn Crass and Discharge patches on their sun-bleached black jeans. It's a trend just like anything else- and passing it off as genuinely victimized lowliness is insulting.

Ryan: "Lead Us Home" is my favorite, musically. My favorite lyrics would probably be from "Grand Finale," which is a bonus track on the special edition of the record. They're the most blatantly Christ-centered lyrics I've ever written. I'm not only proud of the boldness, but the cadence, sharpness and honesty of these lyrics.

Ryan: Friends and family. Doing my best to maintain my prayer life and time in the Word. I'm also grounded by our fans. They allow me the ability to stay on top of my spiritual life by communicating with me, and allowing me to communicate with them.

Demon Hunter's Storm The Gates Of Hell is available now! 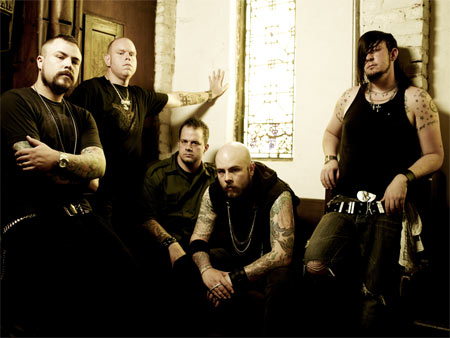