Following the release of the band's self-titled--and final--studio album, Falling Up frontman and chief writer Jessy Ribordy answered some questions (along with a few from guitarist Nick Lambert) from JFH's Wayne Reimer about the band, their journey, and what's ahead now that the band is over...
This interview took place on: February 29, 2016.


Jessy Ribordy: Falling Up has been kind of a side thing for a while now. I felt like it was going to start becoming one of those things that dragged on. I just felt at peace with ending it and moving on. It felt like it was finally the right time to do so. Also, another main reason was I've always been the type of person who likes to put 100% into one thing. I really wanted to work on another project, but I couldn't feel like I could give it 100% of my time without ending Falling Up first. 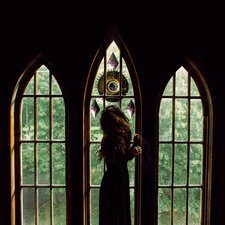 Jessy: I've got a lot of projects I'm working on right now. Finishing up a few scripts that I've only been able to ebb away at for the past five years. I'm looking forward to being able to put more time into those. A couple music projects are on the way. And then I'm going to school for a degree.

Nick Lambert: I'll still try to play in whatever Jessy is working on. haha. Other than music though, I'll be doing work with Mountain Machine as well as start-up community work in Portland.

Jessy: The whole idea of starting up a Twitter, Instagram, Facebook page with a new band and going though all these weird vices that bands do - photo shoots, kickstarters, EP's - that stuff just doesn't interest me anymore. I'm not above it by any means, just not interested in it. If anything, I just want to play local shows on the weekends. I want to write and record an album in my garage - that type of thing. I want to play music in a band, but I don't want to be in a "band," if that makes sense. And that's what the new music project is going to be. Just a couple albums that I'm going to make in the garage and then play at some cafes and pubs around town.

Nick: I'm sure there will be more Northern Abbey in the future.

Jessy: I mentioned before that the whole album takes place in a house, but I never said it was the same house. So that's how it connects to the other albums. The new album is vague and hard to follow, but that is the point. We wanted to end Falling Up with a question mark.

Jessy: Yes and no. Crashings doesn't really have much of the story in it, only elements of certain themes - flooding, primarily. But the other albums all reside in the same universe. Most of the tales are about different characters in different timelines, but certain ones overlap and intersect. So it's not a continuous story, just a world based on certain physics existing where certain events have transpired. Characters react in their own ways based on those physics and events.

Jessy: Yup. There's mostly woe and darkness in our albums, but hope always comes in at the end, even if it's just a little bit. I feel like that's what Grace is. In terms of measurement, there's always more sorrow than hope. But in terms of potency, hope is always the winner. We as humans focus on the measurement aspect so much that we fail to realize how powerful the tiniest amount of hope can be.

Nick: Jessy gave me a lot of free-range with leads, so I basically tracked as many ideas as I could and then let Jessy and Josh whittle it down to the ones that fit the album.

Jessy: I've always written and recorded demos, typically just vocals and piano. Sometimes I'd throw in a guitar riff if I had something specific in mind, or a beat or a bass line. But most of the time just stripped down vocals, piano, acoustic. I'd present them to the band and if they passed - if the guys were excited about them - then we worked on them and most of the time they ended up on the album. I always liked the dynamic of trying to impress my band and then getting them stoked and then working on them. It was better for us than beating a dead horse during rehearsal, working on parts to songs that nobody was really that stoked on.

Jessy: Writing, no. Recording was a little more remote after YSDC. For Hours on up to this last one, we'd pass the tracks through dropbox and work at them in our own studio spaces. It wasn't as fun to do it that way, but it was kind of means to an end. I do enjoy the moments where I can disappear with a track and get lost in it.

Nick: All of my musical experience is independent, so it felt natural to me at least. ha.

Nick: This one, hands down. Hours was fun, too.

Jessy: All of the albums from Fangs until now.

Fangs!: I loved so many things about recording in Rhode Island. I'm a huge American history nerd, and that place is just full of it. So many of the musical influences in Fangs! stemmed out of that old world feeling that I was surrounded by (new world in an old world sense, ha!) And then Casey is just someone who I love working with so much. He's so awesome.

Your Sparkling Death Cometh: It was just awesome, I can't really explain it. We basically never left the studio at Casey's place. I made a French press coffee every morning for everyone and we went to work. It was just so great to take the skills that we thought we had with tracking and producing an album and put it to the test. It was truly the most liberating recording experience, apart from The River Empires. Because although Fangs! was awesome, we still had expectations to meet from the label.

Jessy: Musically: In the early days, we were influenced by Incubus, Taproot, The Used, Thrice. Those were our rock roots. Later years, it's been a lot of Yes, Kansas, and Paul Simon - Graceland. From a melodic point of view, I've always been influenced by Paul Simon, David Gray, and Enya. I've always loved the way they move their melodies in and out of major/minor.

Lyrically: Michael Jackson and Tolkien. Two names you normally don't see together, but they share a huge similarity: phonetics. I love words just based on the way they sound verses the meaning. It is true that almost all of our songs follow stories, but most of those stories were created after the lyrics. I'd first write a song that had a chorus or a big part that was based completely on the way the lyrics sounded, and then from there, I'd try and piece together the rest of the song to fit a fluent story/subject. "Hydro," on the new album is a perfect example of that. That chorus was completely phonetic and so I had to build the story around it, instead of the other way around. Also, the chorus and bridge of "Escalates" was the same way. I built the verses to try and match with the chorus in order for a theme about letting go/forgiveness to be applied. I got lucky with the bridge.

Jessy: I believe there's always a risk regardless of the move one makes when facing that decision, and every artist does. Even if a person sacrifices artistic freedom, that doesn't always mean success, or popularity, or money. They might subdue themselves, short change and muzzle themselves, all for the chance to make some cash or be famous, but then when it doesn't happen, they've lost out on both sides. I chose to win on one side. At least for me, personally, it was a win. I chose to just do what I wanted musically, and not worry about the rest. Not worry about being in a "band" so much than to just do the music that I always wanted Falling Up to make. And because of that, Falling Up's journey has given me experience that I've found very valuable beyond just the short term of making money from album sales and shows. At the end of the day, if that's all the experience someone has, and their only source of income - when it's over, it's going to hit them hard.

And I believe that risk paid off for us. Although, it's not as lucrative as people probably think, we've made more money independently than we ever did on a label. Those are facts.

Jessy: I just wanted the chance to have the freedom to write about whatever I wanted. Wherever my heart was at - to be honest, raw, real. But there was this rift in the system that said if I chose to write about those things, I'm in a Christian band. And it makes me sad. Apart from quitting Falling Up to pursue other things, that stress, that box that I had to constantly fight out of, that current that I had to swim against, is the reason we stopped the band.

Jessy: I've grown in my understanding of God in such a personal way that I can't explain it in words. My hope is that how I've grown in my faith reflects only on how I love others. I can't love perfectly, but it makes this life worth it to try.

Jessy: That's a big answer; there will be a chapter on the book I'm writing about my journey in Falling Up that will go into detail on that. It involves more than just fantastical hopes of how we're perceived in the far future, and more about the lessons we learned from mistakes we made, and how I hope those can apply to others.

Falling Up's latest and final album, Falling Up is available now wherever music is sold!