Having taken music fans by storm with their crunktastic debut Business Up Front, Party In The Back, Family Force 5 is enticing listeners once again with the Summer '08 release of their Dance Or Die EP, bringing a much more dance-friendly sound to the table. With the EP just days from release, we caught up with FF5 front man Soul Glow Activatur (aka Solomon Olds) to talk about the EP and the forthcoming sophomore release.
This interview took place on: 6/1/08.

Soul Glow Activatur: We have been listening to a ton of dance-y type music over the past two years and feel that music is heading that direction anyway. (Daft punk, Justice, Death from Above 1979 and LCD soundsystem to name a few.) YAY, DEATH TO EMO!!!!! It's called "Dance or Die" for a reason... cause we want people to move and have fun! That will always be a staple in FF5 music and that is what separates us from other bands also. No matter if you go to a rock, hip hop, or classical concert- you're always going to want to dance at the end of the night and you need music to do that to. That is why we have our jobs- to provide music to move to! The rest of the record will have a dance vibe but it also has some crazy rock stuff on it also. There will also be a slow jam or two on here!! Whoa, did I just say that!?

Soul Glow: We wanted something that stood out like Pink Floyd or Van Halen album covers. There is also a sci-fi vibe to this album- a military type futuristic feel and we wanted to capture that in an image. There is a story being formed about the whole album right now based on a planet that has been annihilated by robots and the only way to defeat them is to dance! DANCING IS YOUR WEAPON!!

Soul Glow: I really like all of them right now. I think "Dance or Die" is a fun song to listen to. It has chopped up samples in it and just has an ear candy quality to it. It is about the whole Robot's-killing-off-the-humans vs FF5's ability to defeat them with their dance-y rock sounds. "Fever" is about catching a fever from the Holy Spirit and turning up the heat in your life while spreading it to others. "Wake the Dead" is pretty explanatory because it is talking about waking up a dead society and waking up the people that want to keep it that way- music, politics, and spirituality need to be woken up today.

Soul Glow: Indiana Jones for me!! The Incredible Hulk and, well, I don't know what else because we have been working all this year. The Happening looks kind of interesting also

Soul Glow: I haven't even seen what they are made of now but the foam is great cause you can punch people in the face with them without really killing them. I had to do that on the Heart Support tour where this guy was getting a little too crazy with my band members and he was getting way too crazy when I was near him so I clocked him real fast. He thought it was cool, but I was just trying to defend myself from being hit so many times. It was a Christ-like lovingly hit in the face :)

Soul Glow: Pretty much any of these characters (except the Dinosaurs) that turn into cassette tapes rule. Here is a link that you can go to see them: Eject (Autobot humanoid cassette tape), Decepticon Frenzy, Decepticon Ratbat, Autobot Rewind, Autobot Steeljaw, Autobot Grandslam, Autobot Raindance, Decepticon Beastbox, Decepticon Squawktalk.

Soul Glow: VOLTRON: the movie and maybe Thundercats: the movie. I would also love to see some M.A.S.K. comeback.

Soul Glow: Yeah, thanks so much for liking our new song "Fever". We were a little nervous because we want to blow away our old record. Get ready to dance a ton this year with FF5!! Come and see the live show too on Warped tour!!! 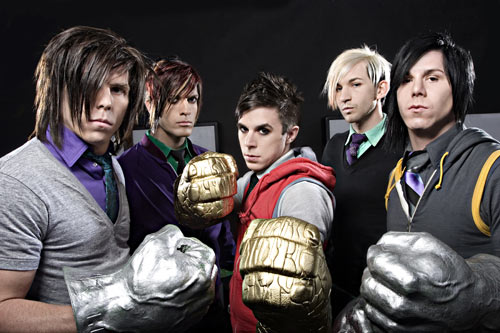