Del Currie: It means absolutely nothing.

Del: Ian and I used to play together before so when I started a new band, I gave him a call to call [me] and in the meantime we hooked up with Andy on drums.

Del: People say we're a cross between the Foo Fighters and the Who.

Del: I'm a fan of Sugar, Soundgarden, STP, all that U.S. stuff really.

Del: It was actually inspired by the movie Murder in the First. If you watch the movie closely you get the drift of the song.

Del: It's all about passion for life and God.

Del: My favorite would be "Alcatraz". It's a very emotional song for me and was really special when we recorded it. The studio was just electric and it's one of the rare occassions that the first vocal take makes it to the master.

Del: We've had a great tour. Alberquerqe (or however you spell it), New Mexico was a great show for us. We'd played there on the Goo Goo Dolls tour and the radio station there have been great supporters of ours so it was a great night. There's also the night Will from AA came out and vacuumed the stage during our set?!?

Del: I jumped off a drum riser once and split my pants clean open. I had to leave the stage and get changed.

Del: Touring, Touring and more touring. We'll try to do a new record for release in 2001 and we're always working on our mainstream stuff.

Del: Yeah, I love Stavesacre, Chevelle, POD and All Star

Del: Tell your friends about the sweetness of Fono!! 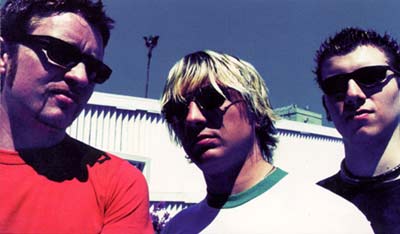 Check out sound clips of songs from their albums right here in the Sound Clips section.