When frontman Jason Dunn stepped out of Hawk Nelson, guitarist Jon Steingard was promoted to the mic and the road to their latest project, Made, started to be paved. With the album just a week away from release, Steingard talked about the project with JesusfreakHideout.com's John "Flip" Choquette, who asked him about the transition, using Kickstarter, moving to a new record label, and more...
This interview took place in March, 2013.


Jon Steingard: Hey guys - thanks for chatting with me! This new record certainly does represent a lot of changes for us! It's really been an incredible year. I guess somewhere around the recording and release of Crazy Love we sensed that some big changes might be coming for us. Increasingly, Jason began to express his desire to explore music outside the confines of HN. We were uncertain what that was going to mean for us, but as time went on, it really felt right. I think God was working in all of our hearts more than we knew. Jason made his decision final in late 2011, and it was announced in early 2012.

Jon: I haven't been asked that question before! I honestly don't know... I think being in a band is an entirely different experience than being a solo artist. The solo thing allows you more freedom, certainly, but it also puts the responsibility for absolutely everything squarely on your shoulders alone. I'd say define your vision, set a course, and find quality people to help you build your career. That, incidentally, is true of anything - in music or otherwise!

Jon: Ha. It's true, DC Talk is fresh out of singers to draw on. We are labelmates with AA now, and I had the pleasure of helping engineer on a few songs on their record... and I love what's happening with that band right now. Overall, I tend to subscribe to the belief that "the market will decide." If a band or artist makes music that connects with an audience in a unique and positive way, and works their TAIL off, they will have a career. For me, I'm not really too wrapped up in what the name of the band is.... if the music is great, and is connecting - I'm on board! Sure, there will be some that are attached to things like names and legacies, and they will certainly be a VOCAL group... but I would be willing to bet the vast majority of music listeners agree with me. Music that really connects with people will always win.

Jon: It's true, Made is a step in a new direction for HN. Honestly, it goes back to something we first talked about when I became the singer.... We had to give ourselves the freedom to create something NEW. I think a lot of people assumed that when we decided to continue without Jason, that we were kicking the can down the road, and squeezing another year or two of employment out of the name. That was not something we were interested in. We had no desire to rehash the past or revisit things that had worked before. I had no desire to try to BE Jason, because I would most certainly fail, and everyone who had loved HN for so long would be completely let down. Instead, we opened the door to a new season. We worked harder, wrote more songs (50 in total for this record), and dug deeper than ever before. We knew that whatever we created had to be genuinely inspired.... and not contrived. I am thrilled to say that we feel exactly so about this record.

Jon: We are lucky enough to have a great audience that is emotionally invested in our band. We know that we are headed to a musical place that not every one of those people is going to want us to go.... but all we can do is write songs that we are passionate about, and reflect who we are. There might be a small minority of people that take issue with some of the changes in HN, but I have been amazed at how our longtime listeners have rallied around us during this time. We feel SO blessed and supported by them.... both at shows and through interactions online. I couldn't be happier with the response the new lineup and new record have gotten from fans. In addition, it's been SUPER encouraging to learn that so many are hearing us for the first time, or diving into our music when they've only "heard of us" before. It's a fun season for us right now.

Jon: Man, Bart is the best. Ha. Seriously, God used him in a super instrumental way during our transition last year. It was actually Bart who suggested that I consider taking on the lead singer role. We were on tour with Mercy Me during Jason's last tour with us... and Bart took me aside and spent some time investing into my life. He was, and continues to be, a huge encouragement to me, and us as a band. Because of all that, we really wanted to have him sing on "Words"... since the subject matter was something that Bart really lived out for us.

Jon: Our contract was up, so there was no nasty split or anything like that... We had a great period of time with Tooth & Nail, and we're super grateful for our time there. With all the changes going on in the band, we felt we needed a fresh start in a few areas... and we have always thought really highly of the guys at Fair Trade. They're excellent partners in this crazy music biz. They're clever and flexible, and because they're a small company, they're able to accommodate some of the wacky ideas we sometimes have. Haha. More than anything though, they provided an anchor for us in a lot of ways during the time of our transition. From the writing process, to marketing, and simply casting a vision, they were really instrumental during that time for us... and continue to be still! 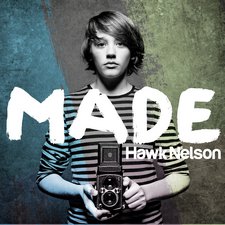 Jon: I think the overarching thought that runs under this whole record is that we are created by a God that loves us and cares about being involved in our lives... even in moments when we can't see Him in action. Certainly, a year ago, we were straining to see God in anything that was happening in our lives, and today we can look back and see how much he had planned for us that we had no idea. I know that's something we all go through, so for listeners that are maybe in a tough spot right now, I hope that Made is an encouragement and a reminder that God didn't bring them this far just to leave them where they are.

Jon: We're really excited to begin working with FH. They're a brilliant organization. The thing I love about them is that they're so flexible. They don't copy and paste plans from one community to another, or one artist to another. They go into each community with a servant mindset, and ask "How can we help affect LASTING change in this community, and leave them completely self-sustaining in 10-12 years?" They're not in the business of simply handing out supplies, they want to see lasting change. We asked if it would be possible for us to partner with them and target one specific community together and they agreed. That was huge for us, since we felt the specificity of a single community brought a great focus to the relationship. We are working in a community in the Philippines called Tanza; we HN boys got to go visit the community, and my wife and I got to sponsor the first child there. How cool is that?

Jon: Well, firstly, I know kickstarter sometimes evokes strong feelings with some folks. I was pretty unsure about it at first if I'm honest, but as we thought about it more, we really liked the idea. It's essentially a creatively packaged pre-order system for musicians--a really interactive one. Since our fanbase has always been super interactive, we thought it was a good fit for us. Also, we were in a period of massive change at the time, and it was awesome experiencing the boost of confidence that came with the knowledge that there were hundreds of people willing to believe in us before they really knew what the music would sound like. Pretty rad. I suspect it's the only time we'll do a kickstarter, because it was such a unique time in the life of our band, but I'm sure we'll always find ways to keep things interactive!

Jon: I think there are fewer rules than ever.... and it's super exciting to see how artists can connect with listeners so directly. I love that. The downside to that is that there is a LOT of noise out there. Bands come and go so quickly. Today's "cool band' is "so last year" in no time. This is one of the areas I think labels actually can help artists. Great A&R guys can help guide a band or artist to rise above the trends of the moment.... and focus on who the artist really is, and on what really connects with their audience. There is no longer a one-size-fits-all solution to many challenges facing young bands. They have to get creative about how to get themselves out there, and choose avenues that fit who they are. The business side of the band can demand just as much creativity as the musical side!

Jon: I think it's empowering, but sometimes overwhelming. Listeners get worn out because of all the noise. I have 4-5 records that I've been meaning to check out at the moment, because they were recommended to me. I simply don't have the time to keep up with it all - and that's true of most people. That's why I believe radio still matters. TV/Film still matters. The average listener doesn't go DIGGING for music; they listen to what they stumble across. Incidentally, I've discovered a lot of cool music through simply walking through the mall and using my soundhound app to tag the songs playing in stores. Retail chains are on the cutting edge of new music! Seriously!

Jon: This will probably appear like a shameless label-mate plug, but the new record from The Afters is seriously great. I may have gotten a sneak peak. Ha. Really great. The last song, called "This Life," might be one of the most significant songs they've ever recorded. It's powerful. I have been loving Imagine Dragons, Fun, and Calvin Harris recently. Keep an eye out for this new band called Mercy Me.... I think they have some potential... :)

Jon: Thanks to you as well! It was a pleasure!

Hawk Nelson's latest album, Made is available now wherever music is sold!