Hawk Nelson has been around for almost twenty years now (hard to believer, right?), and a few weeks ago, Jesusfreakhideout's Alex (Tin Can) Caldwell sat down for a winding conversation about the band's history, the idea of "change" and their new album, Miracles (Click here a review of that album)...
This interview took place in February, 2018.


Daniel Biro: No problem man. Where are you calling from?

Daniel: *Laughing* No way! You're not at a movie right now, are you?

Daniel: What movie are you seeing?

Daniel: Dwayne "The Rock" Johnson for President! No way! So I have a bit of a Jumanji / Hawk Nelson connection story.

Daniel: Well, somehow our song "Just Getting Started" was used in the main trailer for that film. It was the musical track without the vocals, and it's in the first half of the trailer. I'm not sure how it happened, but I'm on the lookout for a check from it!

Daniel: *Laughing* Yeah, it's just us and Guns & Roses in the trailer.

Daniel: Oh man, we talk about that all the time in the band and with the people who make big decisions. Yeah, there's no doubt that things have changed radically, with the rise of streaming versus physical album sales and such. We had a long discussion about whether we were going to release a physical album or not this time around. 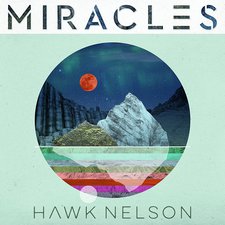 Daniel: Well, it's interesting. There is still a desire for that format in the Christian music world. A lot of folks still get their music at bookstores and concerts, and so it's important to have a physical copy available. But one of these days, a major artist won't have any physical release of their new album. We also opted to release it physically in our native Canada.

Daniel: *Laughing* I'm so sorry for you.

Daniel: Thanks for telling me that. Sometimes it's easy to get jaded.

Daniel: Sure thing. It's great to hear stories.

Daniel: Amen. I'll pray for your friend. It's interesting that we're talking about this. I've traveled around a bit the last few years, just by myself, and I was in a coffee shop in a small town and this young man noticed my bass guitar on my back, and asked me about what I do. I said "I'm in a band," kind of a standard answer. He said "what one?" and when I told him he said "I used to listen to you guys all the time!" And I realized that I was part of his life, part of his story, though he lived really far away and we had never met. It was an interesting moment for me, because I realized the reach we've had over our career. Those stories keep us going.

Daniel: Yeah, there are a few songs where our guitar player Micah is just playing the bells. It makes me think back to my days of loving music and bands when I was young, and I think the ones I've stuck with are the ones that have changed over time. I'm not who I was back then, and I guess I wouldn't expect me or my friends to be writing the same exact kind of music as we did back then.

Daniel: Amen. I could talk about this stuff all day. But I should let you get back to your movie.