James Mead: It's hard to surrender, although if any of us were pressed about the topic, whether it benefitted a Christian to surrender to God, I'm almost certain all of us would say, "yeah, I need to surrender to God, and let Him be in control." In my own life, however, I have said I was surrendering to God when I really was not. In some ways, we may take the first couple of instructions from God, and then act like we know what the rest of the directive is, and act like, "ok God, I've got it from here." We felt like Surrender was an apropos title for the record mainly because it reflected a lot of our own lives' situations, and a lot of the songs discussed that theme, expressing it as being either something we were experiencing joy from, or as something we realized we needed to do. 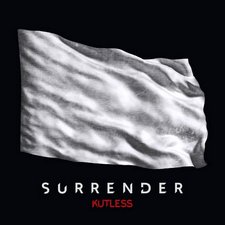 James: Honestly, it was better than I could've ever imagined! Over the last few years, we had been discussing what it would be like to work with Aaron again, an idea that seemed intriguing. For the first four albums of our career, we worked exclusively with Aaron Sprinkle. But several of those projects were difficult because of our own levels of unpreparedness or immaturity. This time around, we had made four more records without him, a lot of which we did quite a lot of work on, whether songwriting, pre-production, engineering, or actual production of certain parts. It had been about ten years since we last worked with Aaron, and at this stage on our lives, all 3 of us found ourselves more appreciative of each other than ever before, more trusting of each other's gifts, and so grateful to just be spending time together again. It was really just some of my favorite times I've ever spent recording. A lot of laughter, a lot of YouTube videos, a lot of coffee, a lot of stories, a little work here and there, and no drama whatsoever!

James: When we first came out, I think that one of the reasons we got rather popular pretty fast was because our music gave listeners a sense of relief. "Oh, finallythere's a Christian band that sounds like this!" On this record, we really wanted to capture that back. We also really wanted to blend a bunch of our own musical influences from growing up in the 90's in the Pacific Northwest into this record. There are nods to all the bands that inspired us to play music in the first place, evident, in some cases, in the songwriting and in production. I would say that this record is the sound of us stepping back into being "Kutless, the rock band."

James: Thank you so much. That song is probably the most "me" a song has ever been, from the topic to the sound of it all. Musically, it is very much indicative of the most influential music in my life that formulated my guitar playing and songwriting. Bands like Silverchair, Deftones, Helmet and Far really live within the music side of my brain, and it was honestly cathartic to write a song like this. It started off as something I was "noodlign" around with onstage at soundcheck one day, and I looked over at Drew [Porter, drummer for Kutless] and said, "hey, this kind of beat," and then I just kinda felt it out from there, working on it from home mostly. Spiritually, it is a song that pushes our boundaries as well. The song is about the destruction of shame in one's life, and how, in the wake of sin, we all have a tendency to hide from God because we feel ashamed. We think, "oh, I'm supposed to feel really sorry about this for a while first" or "I'd be such a hypocrite if I prayed about this right now." This is exactly the opposite of what we should do though; we should be quickest to run to God in those moments! God never uses shame as an implement of discipline. That is something that the Devil uses against us, because he knows it keeps us separate from God. For me, the song is specifically about feeling ashamed of idolizing sexuality and pornography, which is a "sin-epidemic" that is tearing marriages and churches apart. I think the song is applicable to anyone feeling ashamed of being entangled with a certain kind of sin. I really wanted to be courageous and speak out about it, hopefully setting the scene for others to feel healed as well. I wanted to stare shame straight in the face and say, "I'm done with that." The song starts off talking about the effects of staying in the shadowlands of shame, and how we become more and more dead, then it talks about how we need to step into the light of God's mercy and grace. Forgiveness is freedom.

James: It's a pretty cool story, I think. Earlier this year, we were booked to play a worship conference, a privilege of being the type of band we are--we can be the worship band for a worship conference, or we can play right before Skillet on a festival stage. We decided to play "One Thing Remains" for the conference, and we came up with this more rockin' arrangement of the song. We played it for the first session, and it connected with the audience so well, that we just kept playing it at all of the other sessions. It sort of became a theme for the conference, and as we got to spend a few days with these kids at the conference, it really gave them the chance to get to know us. From there, we decided it was a bright spot that helped added a lift to the back half of our set, so we kept playing it. When we were recording Surrender, we discussed how, even though many fans have missed the hard rock sound of Kutless, our covers of well-known worship songs is something that people appreciate about us. So we put it on there! It is amazing how well it fits in with the theme of Surrender.

James: People seem to really like it! I think most people just appreciate how timely the message is; although we see a world with headlines full of violence and despair, we can trust that God's love is bigger, and there's a Kingdom coming.

James: Personally, I feel the most proud of "My Heart is a Ghost," as I've already shared. I love how everything came together on that song. I also really like the song "Mirror." I wrote that song about the mirror metaphor in the first chapter of James, "For if anyone is a hearer of the word and not a doer, he is like a man observing his natural face in a mirror; for he observes himself, goes away, and immediately forgets what kind of man he was" (James 1:23-24). I also got to do some challenging guitar playing on that song, because I doubled my parts with a Kiesel DCX7 7-string baritone guitar, which I tuned to G#C#G#C#F#A#D#, changing the root note from C# to G#. That meant I had to figure out some really gnarly chord-inversions. It was super fun!

James: Well, it isn't easy, but it is much harder if you're not called to it. I think that Jon Micah and I both feel called to this, and our families are super supportive. It takes a very special kind of woman to be the wife of a touring musician. We need to lay the groundwork as fathers and husbands to be the "safe place" our families turn to, our children understanding the gravity of travelling the world to share the gospel. I would say that it is essential that our wives and children also feel like this calling is for our whole family. I want to be the first person my son wants to talk to when he is feeling like life is hard. I am very thankful for how integrated we can be as a family today, with the help of technology. Logistically, we actually just fly home a lot nowadays, as opposed to bringing our families on the road all the time. It's easier for their schedules to stay connected with their lives at home, and our kids are older now, so they have their own things going on too.

James: First of all, I am super grateful to hear you say that that's our legacy. I really couldn't ask for anything more than to be remembered as a band that pointed people to Jesus. We have to be intentional about staying in the Word of God individually. We gather daily (on tour) to study the Bible together, and pray for the crowd that is coming that night. Some of us have our own personal pastors that we call for mentoring and discipleship, but really, the most important thing is to be a person who is earnestly pursuing a closer walk with God every day.