While preparing to return to the studio to work on their fourth full-length project, Lifehouse took some time to hit the keys to answer a quick Q&A with Jesusfreakhideout.com...
This interview took place on: June, 2006

Jason Wade: I started playing acoustic shows when I was sixteen. Made my first demos when I was seventeen. Got signed a little bit later on and it wasn't until I met Rick that I started touring.

Rick Woolstenhulme: My dad would take me to his gigs when I was little.... Once I stole my brothers drum set, it was all over. As for Lifehouse, I was rehearsing in a room next door, and would pass Jason all the time without meeting him. When I found out they needed a drummer... I showed up to audition. It was me up against 2 twelve year olds. I win!

Bryce Soderberg: The band started out with the name "Blyss" with Jason as the core founder around 1997. He was discovered by a producer and manager and they helped him get a record deal. The name changed to Lifehouse in 2000 with the major label debut... Individually, we had all been listening to and playing music for most of our lives, we all met in LA through friends.

Jason: I feel that "Hanging by a Moment" gave the rest our songs an opportunity to be heard. The only problem with that song is the temptation to recreate it in some way. I feel it is best to just keep moving forward and hopefully your audience can grow with you.

Bryce: It has been one of the biggest contributers in establishing our career. We are excited to see the crowd reaction at shows... it gets one of the biggest respones. Many people tell us that it affects them by being a song that is important to their relationship.

Jason: Bryce has been a great addition to our band. His positive energy and excitement for the music has been very inspiring.

Rick: We have seen a slight increase in the female population... other than that, the rock is still rocking.

Bryce: Many bands go through member changes to find the proper blend. This one fits. As long as Jason doesn't bail, we're great! We couldn't go on like Van Halen or AC/DC.

We definitely had a hand in the creative process on our DVD. We were especially excited about the fact that some of our unseen videos would get the chance to be seen.

Bryce: We shot that in Portland in May of 2005. It turned out to be really cool. It's funny, the guy recording the show on pro tools didn't hook up the acoustic guitar track to the computer. The acoustic songs that you watch on the DVD ("You and Me," etc.) were recorded in Seattle the next night, and edited to match the footage from the night before.

Jason: With the video "Blind," we wanted to capture through someone else's eyes what it is like growing up in a dysfunctional home. It is basically my story told by someone else. Tina was amazing to work with she is so talented.

Rick: We are supporters of the Napoleon Dynamite movement, and we were lucky to get Tina Majorino in the video. She did a great job, even without the sideways pony-tail.

Bryce: The story is about a girl who has a bad relationship with her father. Tina did a really great job, she's a terrific actress and a nice person. We were big fans of Napoleon Dynamite. I think our manager or label picked her for the role.

Jason: I would love to write a song with Tom Petty

Rick: Radiohead, The Shins, or maybe U2... there are many.

Bryce: We would love to go back in time and open up for the Beatles at Shea stadium. We'd love to tour with U2, Coldplay, Keane, Death Cab...

Jason: My main goal with Lifehouse is to keep growing and maturing on our records. I feel when you stop evolving you need to call it quits.

Rick: We want to be a band thats around for years making great records. If we can keep topping ourselves creatively, we'll be good.

Jason: We are currently getting ready to do another record. We have a few more shows in August and then its going to be all about writing and recording.

Bryce: Finish up the summer touring season, and make album four. It's gonna be amazing...

Jason: We are planning to post on our website little snippets of new songs that will be featured on our new record. Go to Lifehousemusic.com if you want to check it out.

Bryce: Yes, if you ever screw up our name, call us something creative like Livestock or Lifestyles... not Lighthouse... See you this summer! 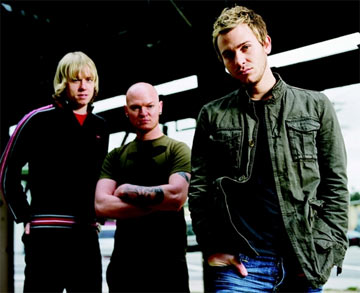