Master storyteller Mark Schultz released his latest record Stories And Songs in the Fall of 2003. Mark was kind enough to take some time out from touring to answer some questions regarding the new record, his writing process, and more...
This interview took place on: 12/2003

Mark Schultz: I think that I have gotten used to the new lifestyle of traveling all the time. I just have a suitcase that I fill up whenever I get home from a trip with clean clothes and set it by my bedroom steps so that I can just walk out the door at the last minute without having to look for anything. That has been a change. It has been harder, though, from a song writing standpoint because all of my songs are written in the church chapel, which is just down the street from me. I write late at night and so it makes it harder when I'm gone or tired, or gone and tired.

Mark: Well, I think that is really nice. I figure that I have kind of found out what I love to do, and that is to sit at my piano and work on songs that back the hair on the back of my neck stand up. Sometimes fast songs and sometimes slow songs that just make tears start running down my face. This is what I am supposed to be doing, no doubt. I sense God looking down on me and smiling when I am writing songs that have meaning and are substantive. Story songs are just so powerful because they are so relate able.

Mark: The promotional tour was just fantastic! I went to places like Grand Rapids, Tulsa, Charlotte, Dallas, Chicago, etc., and I just couldn't believe how many enthusiastic they were. I was in tears after several of those places, because it was just so overwhelming. Everyone was singing every word of my new single "You Are a Child of Mine" of off Stories and Songs as well as all of the older songs: "Remember Me," "He's My Son," etc. I also did a promotion where I went into people's homes and did living room concerts for them all around the country sothat was so much fun!

Mark: Well, the main thing is that I had Brown Bannister produce this record (Steven Curtis Chapman, Amy Grant, etc.). We worked on this record like it was the last one I was ever going to do. We put our whole hearts into it. The songs took a lot of time to create, and I am so proud of all of them. There is not one average song on the whole record. I stand behind each one. In a world where most records have one or two really great songs and nine average songs, this is a real gem. I think this is the record that I will have to play every song off of during the next tour. It's just more than I would have ever dreamed.

Mark: MS: Billy Joel, Elton John, Boston, Journey, Eagles, GenesisWe only had one radio station where I grew up soA lot of 80's!

Mark: Well, I really don't think in terms of a CCM scene. I'm not really one hundred percent sure I know what it is, so I wouldn't feel well good about saying where it is going. I'm just a guy who likes to write songs and play them for anyone who wants to listen. That could be people in my church or the janitors who are there after hours. Sometimes the radio plays the songs and that's really neat.

Mark: It was an idea that I got from reading my great-grandmother's diaries. Three of her 4 sons were in WWII. She would write them letters and kept all of theirs that they sent her. I was reading her entries, and a letter that my Uncle Gus, who spent a lot of time in Germany, wrote. The letters and the diary entries were like reading a script from a movie. I am so proud of this song, because it speaks of my Great-Grandma's faith in god that she instilled in her sons, which in turn gave them the strength to become great men.

Mark: This song is like Queen's "Boheemian Rhapasody" in a way. It has all the theatrics of it. It was written about the state of the corporate life today. It is the musical version of the running on a treadmill after a carrot. This song is for anyone who has ever been late for work and stuck in traffic while trying to floss, late for an important meeting, ever had a paper cut, the boss forgets what your name is, or if you've sat at your desk and daydreamed about going home. It asks the question whom are you serving today God or money?

Mark: I was a youth director for eight years, and it seems just like society puts this enormous worth in work so that people make more money so they can buy more stuff. I have just spent so much time with kids whose fathers spent all of there time investing in the stock market instead of their kids. Being a father is so hard. I think this next generation or fathers has the ability, though, to break the cycle and build incredibly healthy, stable children instead of businesses.

Mark: To me, it is where I get to have recesslike in grade school. My job used to be about leading mission trips, going to football games, leading Bible studies, and meeting with students and then taking all of that energy and releasing is into the piano. So many songs have been born out of that cycle. "I Am the Way," "Let's Go," "I Have Been There," "Back in His Arms Again." It is just a quiet place to go at 1PM or 1AM. It has been great. I liken it to a little well where I show up with my bucket, and I drop it down in there. Sometimes God chooses to fill it up with a song, and sometimes I wait until it's time. It's kind of like fishing, even if the person fishing doesn't catch anything, it still beats working.

Mark: I think the more I forget myself the better off I do. I learned that from being a youth director. Whenever I put someone else in the spotlight, and I step out, great things happen. For instance: going down to work at the soup kitchen, visiting someone in the hospital, volunteering to help a struggling church. All of these things have given me the extra incentive to finish songs well by just taking the opportunity to get outside myself.

Mark: Really simple stuff that I learned when I was 6 but forgot when I was 16 or so, until now
1. God loves me totally and accepts me for who I ammaybe I should try it. :)
2. God's grace is sufficient. End of story.
3. "Happiness" comes from the word "happenstance" or "circumstance." So if you are in good circumstances, you feel happy. Joy, on the other hand, is different than happiness; because it is what God promises in any circumstance for us. To tap into the joy of Christ has been awesome for me. It is deeper, more satisfying, and more grounded.

Mark: Life Is Beautiful, My Life, and Braveheart.

Mark: All the rough mixes from my new record Stories and Songs. I haven't been home since the record came out. 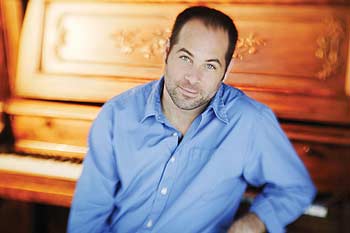