Interviews don't always go as planned. JFH staff member Matt Johnson learned this on MercyMe's Coming Up to Breathe tour when the band took a moment for an interview before their show in Erie, PA. The problem was the interview was being held in a stadium suite where those watching Aaron Shust's set could see the interview taking place in the illuminated room. Sadly, the interview was cut short, but here's what Matt caught on tape...
This interview took place on 3/23/07.

Bart Millard: Our label demanding it would be one reason. It was their idea to do an acoustic version of it, so we did it in the beginning for iTunes and Yahoo. They were wanting exclusives. We didn't know which ones to do, so we did the whole record and they just sat around for awhile. Then the label decided to make an album and we just got an e-mail that said it's going to be put out and we were like "Oh no, what's it going to sound like?" Because we never had that intention, but it's ok I guess. We've put out worse. *laughs*

Nathan Cochran: This is a lot of fun for us. This Spring leg of the tour is hitting a lot of cities we've never been in before, so it's fun seeing lots of new faces. We're having a great time being out with Audio. They've been friends of ours for a long time. They were supposed to call it quits in the Fall, but we convinced 'em to stay out.

Bart: I think we begged them.

Nathan: We're going to hire them to just always play before us.

Bart: We can get [Mark] Stuart to do sign language instead of sing, we can probably get 'em for another year. *laughs*

Bart: There have been some nights where you're really feeling like you're connecting with the crowd more than other nights. There are just certain nights where you know things are taking place that are much, much bigger than you. Those are usually the nights that we just don't feel like being up there. Last night was a good example. We flew all day. We were kind of tired. We were dreading doing the show, but the second we got on stage, it was like "Ok... these people are here for soemthing much bigger than us." It was really cool to be a part of that.

Nathan: I'd say we were probably ministered to more last night than the crowd was. We weren't expecting it to be a great night. The crowd being that involved in the worship times really brought us back to life.

Bart: Jim was just talking about this the other day?

Jim Bryson: What was I saying the other day? To answer your question, um... no. We all felt like we were called to be a part of this ministry, but we never envisioned it getting to this point, joining a label, and doing this for a living. We did this for six years and then we let Mike join the band. It's way beyond any of our expectations.

Bart: Prepping... We go into the studio in May and we don't even have a single idea for a song. So if prepping means that we've talked about how we need to do it, then yes, we are prepping.

Bart: It's hard to say because we may go a different way and it would be a completely different album. Our plans have been something geared more specifically to the church, but not geared towards something that could work more mainstream or to the Christian market. It's hard to say it without alienating anyone... Mainstream is not in the equation. We started out as worship leaders and we always try to make albums that are God-centered, but this one is going to be more corporate worship type stuff. We've had moments on each of our records that churches would sing, but we've never dedicated an album except when we were an independent band. We thought it'd be fun to go there again. It's a plan. Now when the record comes out and it's nothing like I just said, just forget all that.

MercyMe's mysterioso album, decisively titled All That Is Within Me is in stores now. 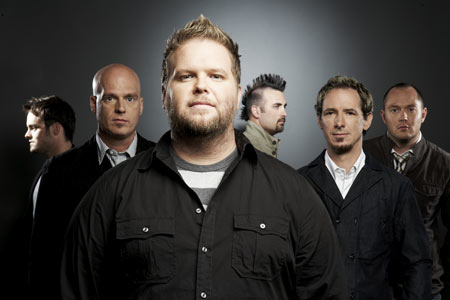