Pop/rock band Monday Morning emerge from the underground with their Selectric Records debut Fool's Paradise. Our own Lauren Summerford recently got a moment to quiz the band's vocalist Derek Stipe on their name, their origin, and where they're headed...
This interview took place on: January, 2006

Derek Stipe: We got started just jamming together as we met. Kevin and I obviously knew each other being brothers, and Kent and I had gone to high school together. We met Justin at church, and after playing music with a few other guys there, narrowed it down to our core four. We thought we kinda had something special, so we started playing out, getting better, and it just exploded from there.

Derek: Monday Morning is a dose of reality. When you confront the world, yourself, and everything around you. No more games, masks, or half truths. That is the boldness we want our music to have.

Derek: David Bach (A&R) had his eye on us even before Selectric was a thought. So when we were free of our old record deal gone sour, Dave stepped in with the offers from Selectric. And we like Dave, so here we are.

Derek: The list goes on and on, and continues to grow. However, some of our biggest influences musically are U2, Pearl Jam, Silverchair, Led Zeppelin, and Our Lady Peace.

Derek: My personal favorite is "Wonder of it All," due to its personal significance. It's my story of faith and hope above pain and bitterness. Reminds me where I was, and where I've been brought to. Humbling, yet empowering.

Derek: Fool's Paradise is our take on the world right now. What concerns us, what we want to change, who we want to be. It's full of songs that illustrate these thoughts, and we hope it inspires and/or challenges its listeners.

Yes, in fact a lot did. All but three songs on Fool's Paradise were songs originally written for one of our independent records. We still like them, so there's no use in keeping them from everyone else.

Derek: True art has its own meaning for each person who views it. It's very symbolic, and to me has a meaning very similar to the album title. Paradise lost, but we still can't get enough.

Derek: Besides world domination? :) We just want to continue writing and performing powerful music that challenges and inspires people, right to their core. Emotional and passionate music, with choruses that make you want to scream along.

Derek: To answer "no" to this question seems just unimaginable. We want our music to be heard by the most amount of people possible. We have been well-received in all our mainstream opportunities, and feel very comfortable performing any crowd. Whether in a club or in a church, the spirit of our performance remains unchanged.

Derek: None of us are married. And no children. Unless dogs count, and in that case, Justin has a really cool dog.

Derek: This is where, as individuals in the band, we would all differ. But, I think everyone would agree they'd love to play with some great classic and modern rock bands like Zeppelin, STP, U2.

Derek: For me, I always thought Creed's 'My Own Prison' would have been that for me. Slightly different vocal tone of course. :)

Derek: That three of us (Kent, Justin, and I) are hardcore skiers and snowboarders. We spend as much off time riding at any resort we can get to.

Derek: I am currently listening to Butch Walker - Letters, and Jack Johnson - In Between Dreams.

Derek: To answer honestly, there is no special formula. My relationship with Christ is a lot like my other relationships. I sometimes neglect Him, dissapoint Him. But that's the wonderful thing about Jesus, is He loves us anyway. I daily remind myself of His grace, and it can be a crippling thing to realize how dirty I am, and I still remain loved by God. That realization brings back a focus on Him, however brief or extended. For me to say that I keep my focus on Him always would be an outright fallacy. We all should do our best, and grow when He allows us to.

Derek: Yeah! Thanks for putting this up, and remember everyone, go out and get our record Fool's Paradise! I'd really appreciate it, and I hope to see everyone who reads this soon at one of our shows! 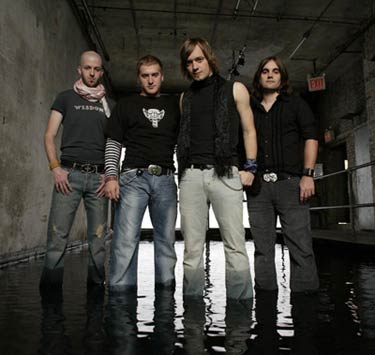