MxPx is back with their latest full-length release, Secret Weapon. The record returns them to the style they're best known for, as well as the record label they began on! JFH's John DiBiase and guest writer Mike Ward quizzed Bremerton's own Mike Herrera on the latest...
This interview took place on: July 16, 2007

Mike Herrera: Sometimes it can be... but I think the struggle is inspiration in itself. We as Americans are so blessed to have the lives we have in this country and there is so much strife out in the world beyond the suburbs that the struggles that we as a band face pales in comparison... but I gotta write what I know.

Mike: The Internet is the biggest change. When we started, bands didn't even have websites. I would say that we need to bring back the value of live music and music in general. It's become a vehicle for products instead of a vehicle for social and political change and ideas, and let's not forget good old fashioned entertainment.

Mike: We didn't try as hard, so it came out more real and natural. And way better. Funny how that works.

Mike: It's a song for the common man or woman. It's about finding the strength within you to live a better life. To use our free will in a positive way.

Mike: We filmed in downtown Los Angeles, and those were technically our instruments but none we cared about obviously.

Mike: I actually went back and listened to some of our old records and some of my favorite punk bands... Rancid, Descendents, Bad Religion, Black flag, and NoFX

Mike: I love "Contention" and "Chop Shop" because they're so fun to play.

Mike: Well, a lot happened to bring us back to Tooth and Nail. A lot more than can be written here... but good things.

Mike: I think it's pretty clear that we have not tried to please the mob over the years. We've just tried to be ourselves and to be honest.

Mike: When we fired our manager... a few years back, we found out that we had been offered many of these festivals. But they were always turned down and never brought to our attention. So now that we know about them, we are playing many of them. We've always done Cornerstone because we knew about that early on.

Mike: The Who or The Clash... two of the greatest rock bands of all time!!!!

Mike: Not really. It's still fun cause the crowd loves it.

Mike: I definitely don't want to die in office... I think we'll continue doing this as long as it's fun and we can pay bills. After the band, I'd most likely do more music and also produce and record. I've started a clothing line called Legionnaire Apparel with a friend. And doing designs is fun. Check it out at legionnaireapparel.com

Mike: It's my solo project that I'm working on. Check it out at myspace.com/tumbledowncountry

Mike: Check out Secret Weapon and you won't be disappointed!!! And thanks for all your support! 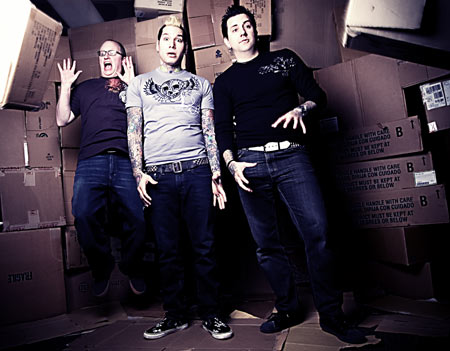