Chattanooga, TN based indie rock band Nevertheless is poised to make an impression on rock music with their catchy debut Live Like We're Alive. With mere days until the release of their record, frontman Joshua Pearson paused to answer a few questions about the band for us at the Hideout...
This interview took place: September, 2006

Joshua Pearson: About three and a half years ago, AJ and I were reading Luke chapter 5 together. The disciples were fishing and weren't catching anything, so Jesus told them to cast their nets on the other side of the boat. Peter told Him, "We have been fishing all night and haven't caught anything. Nevertheless, at Your word, Master, we will let down our nets." We thought it was a cool word that represented his transition from disobedience to obedience.

Joshua: We actually came from the remains of three different local bands. AJ, Adam Rowe, and I went to high school together. Adam Wann and AJ are related, and I met Brad through Campus Crusade as a sound guy.

Joshua: When I went away to college, for some reason, the band practiced every Monday without missing one. They would fly me in for hometown shows periodically. I guess God would not let us put it down even when we had no intentions of doing it full time. The fire for music never died even when we tried to ignore it.

The EP was written about two years before the new album was recorded. At that time, we were at a different place mentally as far as writing songs is concerned. I would say it was more stream of thought, whereas now, we try to picture the completion of the song as we are writing the various parts. We still love those songs, but the new album is where we are at as a band.

Joshua: Live Like We're Alive was recorded in Florida over a period of two months. We definitely had some disagreements with ourselves and with outside people about what songs were making the record and how those songs would be produced. Those disagreements, coupled with living in one hotel room with five people for two months, created some trying times.

Joshua: From my perspective, the greatest thing we learned is to be open-minded. I forget who exactly said what changed my view, but they said, "The things that are truly great are collaborative efforts." For some reason, that shook me and changed the way that I viewed the songs and the record. The other guys went through the process of becoming open-minded too with people helping them mold their parts into something that was maybe a bit different than what they had intended. We are very thankful for these people now.

The song "Lover" was written when I had been reading the book of Hosea in the Bible. God's word shows us how fragile and sinful we are, but it also shows us how faithful He is and how His strength is great enough for us in our weaknesses. I was definitely humbled when the lyrics came to me. That is one of our favorite songs as a band.

Joshua: "Time" was actually written with the purpose of having a song about the subject of breaking off a relationship on the record. Everyone has been in the place where they don't know whether or not to pursue a relationship, and we wanted to touch on that in a fun and clever way. It's not the heart-grabber of the album, but hopefully fun!

Joshua: All of us have a different favorite song weekly it seems like, but, right now, I'd probably say it's "O' Child." I love this song because it reminds me of how God has always had me in mind since before I was even born. He always brings me back when I attempt to run and do things my own way.

Joshua: Even if we set out to write a totally hurt-filled song, and we have, it always ends up being about the hope of God in the end. An older song, "Cries From The City," was attempted to be written from the perspective of someone hurting, and it's probably the closest we'll come to not presenting hope in every song.

Joshua: I can honestly say that we have never set out to write a song for just one certain audience. We attempt to write songs that are real to us first, so that they will be real to the listeners also. Being Christians, all of the songs are obviously written from a Christian's worldview, and we hope they will touch any listener. Christ was not exclusive with whom we shared the gospel to, and we don't want to be either. We chose to be in the Christian industry because it's hard to survive without the encouragement of other Christians in one's life.

Joshua: There are a lot of bands in Christian music who have inspired us, but one that all five of us love is Relient K. Musically and lyrically, they are fresh and sincere, and that is what is attractive in a Christian artist to us.

Joshua: We all like Zoolander. Male modeling is funny in and of itself.

Joshua: I don't know. We were all addicted to In and Out Burger on the West coast.

Joshua: Some of us like sports. Reading is awesome too!

Joshua: God has been teaching us how to be servants to each other. It is so hard to think about others' needs before yourself. We are really attempting to cater to each others' individual quirkiness and differences.

Joshua: Thanks so much for the support and encouragement. God bless Joshua and Nevertheless. 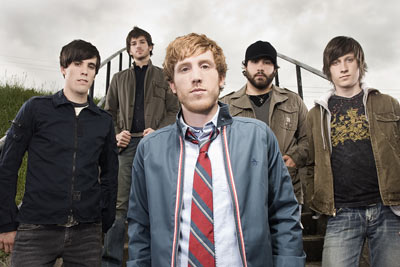