Niagara Falls, Canada Soul / Roots band Newworldson is ready to impact the States with the national release of their Inpop Records debut, Salvation Station. Jesusfreakhideout.com's Spencer Priest recently quizzed NWS vocalist Joel Parisen on the band's sound, songs, and soul... and how this little gospel quartet went from their spot at the corner pub to on stages across the world on tour with the Newsboys...
This interview took place in February, 2008.

Joel Parisen: Though the Newworldson sound is an amalgamation of each member's musical influences, the foundation is soul music. I grew up listening to big band swing (dad's a musician too), and then later on, I got into electro-pop and hip-hop. Mark's been playing in a Motown-inspired funk band for 18 years. Growing up, Josh was something of a guitar prodigy on the blues circuit and later formed a ska/reggae band with his high school friends. And as a bass player, Rich has been a part of everything from indie rock bands to jazz trios. But like I say, it all comes back to roots music, to soul music.

Joel: None of us were expecting to form a band when we came together that fateful first gig on a Tuesday night in a martini bar. I was a solo singer/songwriter with an original repertoire of spiritually focused songs. Mark, who's been a friend and mentor for more than ten years, asked me if I was interested in teaching these songs to a rhythm section (namely he and Rich, whom I had never met before) and starting a weekly Gospel music night at this club. As a working musician, I naturally jumped at the opportunity to get paid to play my own tunes. I wanted my friend Josh to be a part of this before he went away to University, so I asked him to sit in. It was clear by the end of the night that we had something special. Over the course of two and a half years, we used this venue, with its weekly attendance of 50% Christians and 50% non-Christians, to hone our sound, test out new songs, and inspire believers to be bold in their faith outside the walls of their church. God called us to look at our gifts differently. As musicians, we moved from entertainment to ministry and as professionals, we learned to stop worrying about our careers and begin walking on water.

Joel: At the end of one of our tracking days in the studio recording this album, I was standing in the doorway to the control room listening back along with the guys and our co-producer Justin Koop. Suddenly I felt led to go and sit behind the piano in the isolation booth. I had these chords in my head so I started to play what I was hearing. The only lyric I had was "if pride is my prison, then Grace be my keysweet Holy Spirit, come rescue me." Mark came in to the room and asked me if it was an original song I was playing. I said, "I guess so" to which he replied "Good! We're recording that tomorrow." When we came in to track "Sweet Holy Spirit" the next day, Josh and I barely had finished lyrics. We decided to squeeze all of our instruments into that tiny piano room to preserve the inspiration. We recorded three takes, I believe, of us all playing and singing together. Each pass had slightly different words because the song was so new and protean. We ultimately went with the second take because of the vocal performances.

Well, it's the true story of how that song was written. Very late at night, or maybe I should say early in the morning, I was waiting for the bus to take me from one end of the mega-city in which I live to the other. Call it a quirky little urban-inspired devotional I wrote over the course of less than 24 hours and two trips on the bus. I don't have a car.

Joel: That's a good question. I'd have to say it's "Working Man," for two reasons. One, it's the most fun to play live; and two, as a song, it combines all the aspects of the Newworldson sound: the sixties and seventies influence, Josh's guitar sensibilities, Rich's upright AND electric bass playing, a little beat-boxing. It's high-energy and danceable, and most of all, the lyrics tell our story.

Joel: Well, having too many songs is always a good thing, especially in our particular case where we are producing and A&Ring our own masters. We felt it was important on this release to capture the energy the band has live so we actually let our live show dictate which songs would appear on this album. With regards to the typical artist/label relationship, Dale Bray and Wes Campbell at Inpop have been the complete exception to the rule by giving us this level of creative control. From a writing perspective, there are some really strong songs on our indie release and no doubt they will surface on future recordings. It's just very important to us to think of an album as a snapshot of where the band is at a given time. Any future versions of past repertoire will be a reflection of what our sophomore record will be trying to say artistically. But now I'm getting ahead of myself.

Joel: It's all about history. The Americas were called the New World by European explorers. The same explorers that wiped out indigenous peoples and imported African slaves. The same African slaves, robbed of their own language and talking drums, who appropriated the tongue of the slave drivers, the saxophone, the guitar and the three chords of Celtic folk music to create the Blues and Gospel. Soul music is unique to the New World but because it's rooted in suffering, oppression and deliverance, it has a passion that is universal. The name "Newworldson" is multi-layered though. To Christians, the "Son" part is obvious. The "New World" part alludes to Revelation 21.

Joel: Mark gave his life to the Lord at the age of twelve in a Pentecostal church where he learned to play the drums. Rich grew up Catholic, resisted the ritualistic side of the religion as a young man and later came back to God after a family tragedy. Josh and I did not grow up in church. Our transformations were a little more dramatic. I was an agnostic who got slain in the Spirit; Josh was rescued by angels after a near fatal motorcycle accident. Now we all attend Southridge Community Church in St Catharines, Ontario which is non-denominational and very outreach focused.

Joel: How to not be a lip-service Christian. How to talk less and to let my life be my message, which is incredibly hard to do. How to not say one thing and be doing another. Some people struggle with surrender and trusting that God has a plan; that part's been easy for me. My problem is knowing that in my partnership with Him, I have work to do too. It's not all sit back and enjoy the ride.

Joel: When you're used to playing in front of 100-1000 people in clubs and churches, making the transition to playing in front of thousands of people is humbling to say the least. We had to learn arena chops, which meant more than just getting used to in-ear monitors. We had to find new ways of performing that would make even the people in the farthest rows feel included. Peter Furler was very encouraging after our first couple of shows. He came up to us and said "you've got them, I can see them wiggling in their seats. They're all waiting for you to give them permission to get up and move!" All the guys in both bands, newsboys and Kutless are fantastic people, funny, supportive, and it wouldn't feel right if I didn't mention how great the crew has been as well. I think our favorite part of the tour has been getting to know all the fans at the end of the night. That feeling of community is so important when you're 800 miles from home.

Joel: Talk with accents. We like to be silly in general. Josh and Rich have great Scottish accents. My best one is a world-traveling, brain-dead ex-hippie. We also listen to a lot of music on our drives. Lately, the CDs getting the most spins are "We'll Never Turn Back" by Mavis Staples and "Turn Around" by Jonny Lang. We're big readers too. Right now I'm reading "Driven By Eternity: Making Your Life Count Today & Forever" by John Bevere, and I'm also reading "The United States Of Europe: The New Superpower And The End Of American Supremacy" by T. R. Reid.

Joel: Yeah. After our exposure tour of the Dominican Republic last summer (courtesy of Compassion), we discovered how wealthy we truly are and how blessed we are to be living in a developed country. More than salvation, more than judgment, Jesus talks about the poor and commissions us to look after those who are hungry and thirsty. Whether it's through sponsoring a child living in an impoverished developing nation or volunteering locally, I encourage every believer to check out exactly what He was talking about. The rewards are immeasurable. It's important for us to experience His perfect love in action. 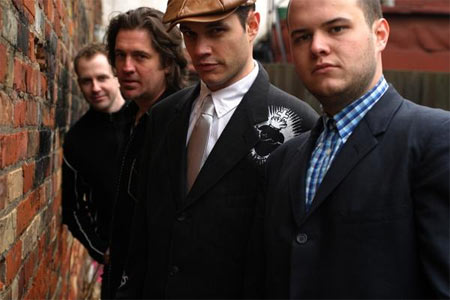