A successful artist, wife, and mother of three, Nicole C. Mullen took a few moments out recently from her crazy schedule to answer a few questions about life on the road, multi-tasking, and her new record Everyday People...
This interview took place in August, 2004

Nicole C. Mullen: I grew up singing in church with my family starting around the age of 2. When I was about 12 years old, I started writing songs and later started recording demos which led to my first recording contract.

Nicole: When I was little I was chubby. One day I got stuck under the sink and my dad said, Come on out from under there Bubbles, come out, come out! So after that, the name just stuck. :)

Nicole: With a lot of prayer.

Nicole: Pray, read my bible, have good people around me keeping me accountable.

Nicole: Mostly I was influenced by everyday people. Often when Im writing, the people Im seeing in my head are the people Ive seen at my concertspeople who have e-mailed me or sent me letters afterward. It definitely lets me know that Im singing for a hurting audiencevulnerable people who are crying out to God, people who are going through circumstances, people who are everyday. Songs like Bye, Bye Brianna, Valorie and others show this.

Nicole: As far as songwritingI wanted to write a message of hope. Creatively, this was the first time I got to produce a number of the songs myself.

Nicole: Two years ago, we were in Michigan, and after a concert, I was fortunate enough to meet this little, blind girl, Brianna. I was telling her how cute she was. I said, Girl, your mama has your hair looking good, and your clothes. I took her fingers and let her feel my face, and I was saying, Girl, I got a big ol nose dont I? She was laughing. After leaving, she stayed in my heart for several weeks. She wound up drowning at a blind camp. The thing that sparked me about Briannait hit me hard that there are things that we dont know about, because we cant see. There are things that we, with our natural bodies, we cant know about. So to say that we cant believe something because we cant see doesnt make sense. If you limit things only to what you can see then really youve limited yourself massively.

Nicole: Its about a combination of people. Valerie is a lady we knew that was in our church and she had three kids. David and I are like, Lets say something off the word ValerieValorie, with the spelling from the word meaning valor, or bravery. So we did a play on words there and we saw in this Valerie that we knew some strength, just even in the midst of her being on welfare or whatever it was, she was developing character. She had one child that was handicapped and two other kids, no father in the house, and she was determined to get off the system. We chose to write about that and in the midst of it, it became more than just Valerie. It became other women. Its a mantra for us all.

Nicole: I cant choose my favorite! Thats like someone asking you to choose your favorite child. They all have a special spot in my heart from This This about how I gotta be myself to the struggles of a single mom on Valorie to the mantras of every person on Gon be Free to the declarations of who God is on I Am I like them all.

Nicole: Hopefully smack-dab in the middle of Gods will whatever that may be.

Nicole: Going out to a good movie, reading a good book, hangin out with my kids, husband & good friends.

Nicole: Count of Monte Cristo, The Wedding Planner, The Last Samurai, The Passion of The Christ

Nicole: Anything by Francine Rivers and Bock & Bodie Thoene

Nicole: It helps me to remember that God did not come to condemn me, but to save me and in that, I see His mercy. 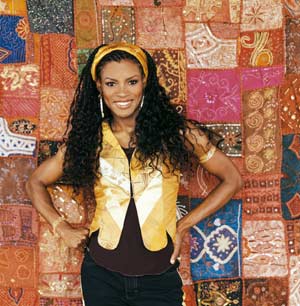