For ten years, one female vocalist from Australia has been drawing hearts to Jesus like none other, piecing together an incredible career that shows no signs of stopping. This 25-year-old artist graciously paused before a recent performance to allow us to dig deeper into this woman's life as we found out just a hint of what makes Rebecca St. James tick.
This interview took place on: 6/7/03.

Rebecca St. James: Well, God totally confirmed that I was meant to use "St. James". My label had kinda wanted me to change my name which I didn't like the idea at all initially. And they thought about naming me "Rebecca St. John" and I just didn't like it because I didn't even have a relative named John. It just wasn't a part of my life. So, I thought about "St. James" because John and James are similar but my grandfather's name was James. But I was still unsure about the changing the name thing and then I called up my grandma, who's in Australia and we were in Nashville at the time, and I said "Do you have any family names I can use - at least close to my heart?" And she said, "Well, how about 'James'?" because Jim was James and this was just after he passed away. So it's a total miracle that she even brought it up and on the other side of the world without knowing what we were thinking and she brought up the same name. So I felt like God really confirmed it and it's kind of like a tribute to my grandfather, too, because he was a real man of God.

Rebecca: I think there's so many forms of inspiration that I draw from. I mean, mostly the Bible really lyrically and from experiences. But musically, I mostly listen to Christian music so I've grown up on Christian music and listened to a lot of Christian radio. Recently I've really enjoyed Switchfoot, I think they're just awesome and their new album's great. And there's a worship album by Hillsongs, You Are My World, that I've really enjoyed this last year. And a couple soundtrack CD's cause on on movie soundtrack CD's you get a whole bunch of different songs and different tempos and feels and I like that. It's a bit of variety, too. John: Which ones? Um, I just bought The Wedding Planner soundtrack CD (*laughs*), Notting Hill, A Walk To Remember. Amy: I like all the orchestral music. Yeah, there's a little bit of that, but it's a lot of modern songs, too. So that's kinda cool. I don't want to purposefully listen to anybody to say "I want to sound like this", because I really want the creativity to be fresh and new and of God. So I actually try and kind of protect my creativity when I'm working on an album. So I've got what I'm listening to.

Rebecca: There's not a whole lot of pressure on the role model aspect of what I do because I'd be wanting to live my life for God and living it morally and being radical for God anyway, even if I didn't have my platform. So it's just, in other words, being a big sister to my siblings - I have six younger siblings so I have always had that sense of responsibility, so it's now just and increase in the sense of responsibility. But I think the constant pressure to be "on" and to be friendly and outgoing and be the one that's reaching out, I think that has sometimes really drained me. Because people do treat me differently being in the spotlight as much as I am... Amy: I'm trying not to. Oh, no no no! *laughs* You're fine! You're doing fine! *laughs* You're doing good, it's cool! *smiles* So that's, I think, a challenge because sometimes with the road it just gets really draining and tiring and sometimes you don't feel up to being real sparky. But it's almost like if someone catches you on a day you're not feeling so good, they'll think "Oh, she's a prima dona and she won't talk to me". So, y'know, you really do have to kinda force yourself out of your comfort zone and give even when you're feeling low yourself. That's probably one of the challenges that I've found. And just receiving enough spiritual, physical, mental, emotional rest to cope with the schedule. I mean sometimes I've found that challenging too.

Rebecca: Yeah, it originally was very much "God, I thank you for being with me and for loving me and for being my strength and my reason for singing for the last ten years." So it was very much a thank you song to Him. Then when all this stuff happened with the war and there were webpages being set up to thank the troops and they were crashing because so many people were getting on them. So we thought "Well there's a need for a song in which the troops are being thanked and encouraged". We talked to somebody who had her husband, I think, in the Middle East and he had apparently relayed back that they didn't even know if America was supportive. So just to make a little small dent in that and to just kind of encourage people to be praying for these guys and supportive and expressing that support. I think that was something that I was really excited about being a part of.

Rebecca: Well songs really evolve from early rough mixes to the final thing. And you can also do kind of remixes and I know on "Song of Love" we kind of started out it being pretty heavy and aggressive John: Yeah... and then we pulled it back to being more accessible. Because, when I wrote that song, I really saw it as being a song that can reach out to a lot of people and if we just had it the rock it would have appealed to a much smaller amount of people. John: It's more accessible. I like the original version a little better actually... Yeah, I mean I'm into the more like gutsier rock stuff usually but with that particular one I just felt like it needed to hit a broader range. John: Or like with the end of "Quiet You" where you yelled at the end of the song. And in the final version you say it softly... Yeah! *sings* "With my love..." Yeah, that was Matt [Bronlewee]. I mean, some of them are my calls and then some are actually Matt, my producer, changing it. Next album... probably the album that's closest to what I like to be musically is my God album, except the quality of that isn't as good as my more recent albums like Transform is probably the best sounding album. But God has the passion and the rock edge that I like most. So I think I'd like to, on this next album, have the best of both worlds.

Rebecca: Eddie Degarmo, he executive produced my first three albums I think and with my A&R guy at ForeFront, he's heading up this project and has written it -- it's like his baby, it's his dream. So he always thought of me as being involved cause he's kinda like my uncle. *chuckles* He just really saw me as one of the characters so hw's been thinking to me about it for awhile. And I just really had a passion for it from the word "Go".

Rebecca: Well I've only done the music for it yet. The musical hasn't actually toured yet. It starts, I think, in November. But just doing the music has been great. And I did like a little clip - like a little acting piece kind of - a trailer for festivals and stuff. John: Yeah! We saw that. Yeah, but it's just a tiny little part of it. There's nothing more than what you've seen. Amy: We're going to be living in Bethlehem, PA (where "Hero" is born in the story of !Hero). Oh, really? *laughs* I didn't know that was a real town!

Rebecca: Well I will be acting in the musical, I've always wanted to do that so that's kind of exciting to me. John: What's that going to be like? It's going to be you, and Michael (Tait), and Mark (Stuart)? Yeah, and there's going to be a whole bunch of other people, cause there are a lot of other characters in the comic book, and novel, and music. T-Bone was on the soundtrack so he might come out, I'm not really sure. We'll be singing -- it's a rock opera, so it's all sung but it's going to involve acting and stuff. And we're actually, next week, rehearsing for the Summer because we're doing a couple songs.

Rebecca: I think the thing I've learned most recently about that whole courtship / dating thing is the importance of openness and honesty. I think a lot of people today make it a game with elements of deceit in it and a user mentality and God's not about any of that. And like even with my last relationship, I think it was one of the biggest things we both learned through it. I mean I've always been an honest and open person but we both grew in honesty and sharing our hearts and where we're at; and when there was a bit of conflict or a misunderstanding, talking that through in love. Just kinda sharing it and how to do that. Cause as girls we're just so open and just want to share everything and the guy can get their defenses up and say stuff and get offended -- so just how to share it graciously. 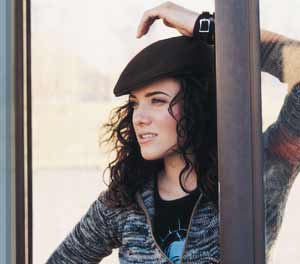