With RED's first crowd-funded album Of Beauty and Rage about to release worldwide, Jesusfreakhideout.com's Wayne Myatt chatted with RED's Randy Armstrong about where the band's been, where they're going, and what inspires them...
This interview took place on: 2/3/15.

Randy: I wouldn't say that we've made any huge changes. I would say that we've definitely matured in our writing. We wanted to go back to a place where people discovered the band and fell in love with the sound. When we made our first record, we didn't think we were reinventing the wheel or anything. [With this release] we wanted to forget about radio and all those things that so many think are important.

Randy: Absolutely. When we met up last January, at the far north of Maine and locked ourselves down at a lodge, we talked about what we wanted to do and when we made that first album, we didn't know anything about radio, we didn't know anything about anything. We just wanted to make music that was good and thought people would fall in love with. We decided to do it again and forget about all outside influences of what others were telling us to do. We wanted to do what we knew we should do.

Randy: After Jason (guitar player) left the band, he was still under contract and continued to do some writing with us. He's now playing guitar with Breaking Benjamin though. We've parted ways with about four members now and they're doing their own thing. Mike, Anthony and I, well, we moved to Nashville. It's just the three of us. We started the whole band. The core members are still there. People come and go and it's the nature of the business. It's difficult to tour and live on the road constantly. I think people will see band members coming and going which can sometimes be disastrous. With some members like a drummer, it might not be that big of a deal. But if we lost Michael, I don't think we could recover from something like that.

Randy: Rob came at the very infancy of the band. Over the years, we've developed such a familiarity with each other and we know what each other is thinking and our styles. We can go to him much more prepared now than we did with our first release. When we made our first album, we recorded a couple of tracks at a nursery actually and took the demo to him. With Rob in the process, we knew what we were going to get with the passion, and he is emotionally vested in what we do. Rob has been here from the beginning. We parted ways for one album (Release the Panic) and we wanted to try some things. We knew that we were going to return to working together again with Rob, but we didn't think it was going to be this soon.

Randy: Anthony actually created the logo. We also tried to play around with the logo with a 3 on the third release. It's like, once you become familiar with the logo; you don't want to change it, like the Nike swoosh. People get used to it and they know exactly who it is when they see it. 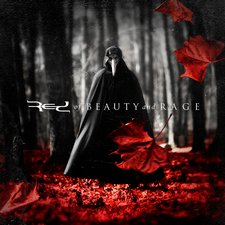 Randy: It is actually one of the plague doctors from the Middle Ages. We wanted to get that feel of Dante's Inferno. This is something that I think people can agree that it can be seen as provocative. We took it to the next level and evolved it into a video and graphic novel as well. It depicts a plague doctor and it represents the evil that we all have. It's like every time we turn around, it's right there. It's kind of like no matter how good life can be, there's always going to be some kind of struggle. I think that's what that represents.

Randy: Right. Yes, everything has a centralized theme and everything plays off everything which is what we're going for.

Randy: When we were writing the song, we imagined ourselves alone behind bars or something that's holding you back. We talked about what's really holding ourselves back, which is really ourselves. No matter how much we fight against these chains that keep us shackled, we try to break free from these chains, but there's always one link that you always hold on to. For some reason, I don't really understand why I think of something that makes me feel horrible or something that I shouldn't do or say. When I hear that song, I think of somebody sitting inside of some kind of ancient prison and they put themselves there. I think it can be a song that resonates with everyone listening to it and it's a song that everyone can relate to.

Randy: Our music is always hard and heavy. We do have other levels of our music in order to have something for everyone to listen to. Also, it's like the emotions that we go through are either up or down. Through the journey of life, you have your up moments and your down moments. You have your rage moments, and you have your moments where you see the beauty and the silver lining. That's what this record embodies and that's why we named it Of Beauty and Rage. Through all of the anxiety, frustration, anger, and pain in life, there are these moments of clarity that we all have to experience. That's what we tried to do with this album.

Randy: A couple years ago, we were asked by a video game company to do a Red-like version of the song "Stand by Me." I imagine there will be other opportunities for us to do cool things like that. People like to hear spins of songs.

Randy: It's an awesome thing. When I was a kid, I thought it was pretty awesome to see my favorite band win Dove Awards. When we first started in Nashville, we worked with one of the original members of the band Audio Adrenaline. We walked into the studio. We met him outside the studio and we took a couple of pictures with him and thought of what it would be like to have an award. Getting into Nashville, we didn't go there to originally win awards. The awards are an awesome feeling to be recognized by your peers, but it's not something we shoot for every time we make a record.

Randy: When the first record came out, we got compared to them a lot. At first, we were kind of angry about being compared to them because people were saying we were ripping them off. Unlike Linkin Park, we didn't have off-scratching and rapping. But then, we stepped back and thought about it; we are being compared to a band that sold 40 million records. We were being compared to Linkin Park when they were at the top of their game when our first album came out. So, it was sort of an honor to be compared to them. We get them still though. I think it's the lyrics and the content of songs that play a big role in a band standing out on an album.

Randy: I was pretty excited about it. It was actually a pretty good movie. I've got the movie poster hanging in my house and it's framed. It was a cool thing to be a part of it. We were thinking "Feed the Machine" was going to be in a Transformers movie. But with that, they wanted all of the bands from one particular label, Warner Bros. when releasing the film. That's how it goes though.

Randy: I'd say to inspire change. We try to challenge people to get out of their comfort zone, to take notice that they are not perfect. People have done dark things and they're not talking about it. As a band, we've always wanted to be an inspiring example. We want to show people that they can change things; there is a way through the tunnel. They can get out of their situation. They have to use that strength inside of them and do it.

Randy: Thanks for the interview, and I appreciate you guys' support. If you get a chance to come out to one of our concerts, let us now. Hopefully, we can see you guys at a show. We would love to meet you.

Red's latest album, Of Beauty and Rage is available now wherever music is sold!