In 1999, Chasing Furies made their impressive debut with With Abandon, but it sadly was not long before the group disbanded and disappeared. Former vocalist Sarah MacIntosh has been busy working on her debut solo project and with the record on the horizon, we took a seat inside the Nashville Hilton hotel lobby during GMA Week to discuss what she's been up to as well as her new album The Waiters, The Watchers, The Listeners, The Keepers, & Me...
This interview took place on: 4/23/07.

Sarah MacIntosh: Well, immediately following Chasing Furies, I went on the road with Michael W. Smith and sang background vocals and played guitar for him. Then we moved to San Diego after a year of touring with Michael. My husband Jonathan is the music director at our church and we lead worship out there and sing around a whole lot. I've been working for the past year and a half on this new solo CD.

Sarah: It would be nice if there was some fantastic story that I could tell you.

Sarah: It was just... there was just no really big "it" thing. I think my brother was far too talented to be a guitarist and a background singer for me. That was part of it. He needed to make his own record, and we wanted to move to San Diego.

Sarah: I know, I think that all the time. I think people get the misunderstanding that it's really easy to be a musician, plus a Christian musician on top of that. A lot of times what happens is you want to support other ministries and play for really cheap, but you spend a lot of money to get to that place and you have to pay for your family at home. It's not a high-life rock star thing. If you're in it for the ministry, most of the time it's not glamorous. (John: I totally understand. ) Another thing I don't think people understand is that a lot of musicians have part-time jobs. I know I did. I worked at a restaurant as a hostess. They were rad. They let me come in with pink hair and be their hostess. It was a fancy restaurant. They were totally OK with it.

Sarah: Yeah, it's a line from the song "Sunshine." It's on my MySpace. It's funny because I don't know how people are going to be able to figure out what that song's about, but it's one of the songs I'm most excited about because it's talking about something I never really thought I could have written about. It's talking about the Rapture in a non-religious way. Not like "He's comin' back." *laughs* I just sat down one day and was thinking about how, as Christians, we all should be gathering together, kind of camp-style, waiting for His return. It's like the story about the wise virgins, who wait with their lamps full.

Sarah: Actually it was really exciting and really fun. My husband Jonathan produced it all and played all the guitars on it and actually played a lot of bass on it as well. We were able to get Vinnie Colaiuta to play drums who actually used to play drums for Sting. He plays all kinds of session work. It was really a huge blessing that we were able to get him. And then a good friend of ours, Brent Milligan, played bass. He produced half of the Chasing Furies record so it was good to have him back.

Sarah: Well, you know, we are really involved with our church. When we went to San Diego, I noticed there were a lot of people who don't know hymns. I grew up with hymns and there was a CD that I did that was all hymns and it was basically just for our church. So there was another CD in-between there that most people didn't know about. It wasn't like Chasing Furies or my solo project. It was a church record. But I love hymns! And we lead worship a lot, so it was very fitting for what we were doing.

Sarah: It depends on what mood I'm in, honestly. One of the things that I think is gonna surprise people is a lot of times people thought of Chasing Furies as being this very artsy, not-you're-typical-CCM record. This is the kind of record I want to make. I just sat down and thought about what songs would express who I am right now. There are some very worshipful songs on there. There's a song on there called "Be Glorified" with totally worshipful lyrics. And then there's a song like "Sunshine," on the other hand, that could be anything. There's a song called "Did You Know" that could totally be pop radio, and pop people would not necessarily know it was a Christian song. But if you're a Christian, I hope most people would know... hopefully they would say "OK, this is what she's talking about. I can identify with that." I'm excited that it's totally a representation of who I am. You're gonna sit down with me and see a side of me that doesn't look like your typical CCM artist, but then hopefully if you're listening to me talk, you're gonna hear "that girl's a Christian and she loves the Lord."

Sarah: It's interesting. Just when you think you've learned something from the Lord, He shows you again that you really haven't. Honestly, I think the biggest thing is just dependency on Him and focus on Him. It's easy to go "I'm not gonna get sidetracked by that because that's worldly." My focus should never be on just watching TV all day long. My focus should never be on being a superstar. All of those things, people know that they are things we shouldn't idolize or be too focused on... but, you know, you forget that there's things that can take place between you and God. Even families and friends and your relationships with them. And then something goes wrong with it and you're like "Sorry Lord, I realize I put that too high." So I'm learning to see that my focus always just needs to be on Him.

Sarah: I'm only pursuing the Christian market. If something were to happen with mainstream, that's totally fine. I'm not gonna say "no" to it. A lot of bands specifically don't want to do mainstream. I think that the world is the world and if people can be reached, then do whatever is possible. But there are a lot of Christian songs on my solo project that I think the mainstream world may not want to hear. So we'll see... I think there are a lot of songs on there that are for the church.

Sarah: Actually, we can do it all. One of the things we're excited about is because we can do smaller things; we can go to smaller churches that don't have the money to bring in a full band. That way we don't ever have to be strapped and we can bless somebody's ministry that only has a little bit of money. If a church has more money, we can go with a full band and do it like that.


The Waiters, The Watchers, The Listeners, The Keepers, & Me is available now on iTunes and through www.myhorizonstore.com! 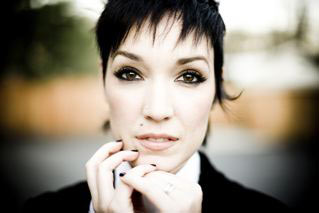