When front man Michael Sweet and his cohorts in Stryper first hit the music scene in Southern California in the early Eighties, few fans could have guessed that the hard-rocking outfit would still be going strong some three decades later. JesusfreakHideout.com's Bert Gangl caught up with Sweet to discuss the group's formative years, the challenges associated with being a Christian band in the mainstream arena and the new album, which just happens to be their most compelling work in over two decades...
This interview took place on: 2/25/13.


Michael Sweet: God. I attribute it to God and the fact that we've remained focused on serving him. Even during the rough times, we tried to keep Him at the center of things. The scary thing is, now it's been almost 30 years. We got started in 1983 and the first album came out in '84. But thank you. We feel very blessed to have been able to continue on for this long. And you're right; after this many years, not too many bands can say "All Original Members" on their posters. We're proud of that and truly give the credit to God for keeping us focused and together.

Michael: They did, as well as my grandmother, Nana, as we called her. I was, and still am, a relatively shy person. We used to stay with my Nana a lot when my parents were out singing. Rob and I were very young, but Nana would play guitar and sing songs. There was always music around the house. Inevitably Nana would say "Michael, I'll give you 25 cents if you'll sing for us." Robert would beat on pots and pans, until one day they got him his first drum set, from K-Mart. My parents were incredibly supportive as well. It was our dad who encouraged Robert to have me audition for the band. Music and love were in my life at a very young age.

Michael: Our parents loved us unconditionally. They probably knew that as long as they continued raising us right, we'd eventually find our way "home" on our own, and we did. They've always been supportive of us no matter what we chose to do.

Michael: Robert and I are night and day, and the challenges are just that we are two very different individuals. Neither is better than the other; we're just different. I love my brother dearly and it's been an incredible joy having him in the band. Through everything I've been through, I've always felt a special bond with him. As much as we probably get on each other's nerves from time to time, we both love each other very much.

Michael: I talk about this in my upcoming book, Honestly. My friend, Kenny Metcalf, was instrumental in helping us find our way to getting on the right path. I don't want to give away everything Kenny said, but he basically just shared his heart with us and we were receptive to where he was coming from. It was the turning point, indeed.

Michael: Being located near the Sunset Strip certainly had an influence on us, just as any kid is influenced by their surroundings, but I think we found our own particular style nicely. I actually enjoy a variety of musical styles. I'm not the kind of guy that thinks, "If it's not metal, it's not good."

Michael: We were managed by my mother, Janice, along with Daryn Hinton. Having my mother manage the group was a little like having my brother in the band - it was great, but it definitely had its challenges. Since then, managers have come and gone in and out of my life, some of whom I haven't spoken to since we parted ways. But, your mom is always your mom, though, so it's not like with other managers where you can part ways and possibly never see them again. Having our mom looking out for us in the beginning was awesome. I knew she always had our best interest at heart. But as the band got bigger, it became a bit more challenging.

Michael: Against The Law was the departure album. It came at a time when the musical landscape of the industry was changing rapidly. We had been doing the yellow-and-black thing for almost seven years at the time, and sometimes, as an artist, it's just time for change. We felt that it was the right time for us to try something new. Lyrically, the album was the product of us just getting beat up for years by the church. We were constantly being scrutinized for this and that, and lyrically we just rebelled. We didn't rebel necessarily against God, although I admit it wasn't the strongest point of our career, spiritually speaking. Mostly, though, we were just tired of getting beat up by the Church. 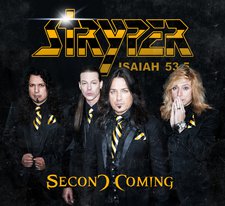 Michael: As with all of our albums, there are parts of it I love, and parts of it I don't. That was a rough time in my life personally, so it's difficult to reflect on that album strictly based on its content. Songs can bring back either happy or sad memories based on where you were or what you were doing when you first heard them. It's a little like that with Against the Law for me. It's a great album, but because of where I was in my life at that time, it's often hard for me to listen to it objectively.

Michael: Yes. As an artist I've always felt the need to grow and evolve, and I think those first two solo records were absolutely a reflection of my need for change - the need to express myself in a different way musically.

Michael: Whether it be Reborn, Against the Law, To Hell with the Devil or any other album, I think the records are simply a reflection of where I was at the time as a person and as a songwriter. I've never really followed musical trends or felt I needed to go in this or that direction on a given project. It's more about where I was personally at the time I was writing those albums.

Michael: Wow, thank you! I'd like to think my songwriting has matured, but it means a lot to hear you say that.

Michael: Yes, for a while I just wanted to get out of music, so I worked in my wife's family business, a cranberry farm and campground. It was fun. I was known as Ranger Mike. I enjoyed that time in my life, spending time with family, really just being a "regular guy."

Michael: *Laughs* Now, that's a first! I've heard a lot of fun suggestions for the band, but that's a new one. Maybe I could sell the album in spas and coffee shops, huh?

Michael: No, thank YOU! I appreciate you taking the time to talk about the band and our music. And yes, we too look forward to a bright future. Keep up the great work with all you do and hopefully we'll run into each other out on the road.