Singer/Songwriter Blake Rayne got his feet wet in acting with the lead role in the feature film The Identical, starring alongside actors like Ray Liotta, Ashley Judd, Joe Pantoliano and Seth Green. Jesusfreakhideout.com's John DiBiase caught up with Blake to discuss the movie, his first acting gig, and music that inspires him...
This interview took place on: 8/27/14.


Blake: Aw, that's awesome to hear. Y'know, it's interesting; it is a faith-friendly film that I don't feel is necessarily pushing an agenda in your face --

Blake: Yeah, it's kind of a refreshing, different take, and it was a pleasure to be a part of it for sure.

Blake: Yeah, it was all Seth Green. I asked him "Why are you doing this film?" And he said, "Man, it's really just a good story. And this story needs to be told." And that's what's kind of nice about it too, because aside from everything else, whatever you want to take from it, you take from it, but at the end of the day, it's a great story that can entertain people, too, y'know? 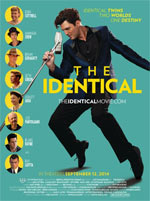 Blake: Well, *laughs* I mean, I didn't pick the film, the film picked me first. I was in a rehearsal studio in Nashville with my band [Blake Rayne Band] and we were just rehearsing, getting ready to go out on tour, and at the same time, Yochanan Marcellino, the executive producer of The Identical, was at the same rehearsal studio looking to rent out space to rehearse music for the movie. And this was before they had any finalized script or anything. We ran into each other and we just started talking, and after a few weeks of meeting and whatnot, he said, "I don't know if you can act, but if you can, I want to cast you as the lead role in this movie." I'd never acted before, so it just kind of picked me, y'know?

Being in the business now--to whatever degree you can say I'm in the business of acting--I know it just never happens that way, so I was very fortunate. It was dumb luck.

Blake: Absolutely! Y'know, I got a phone call while I was in Santa Monica, California working with an acting coach. I was in a parking garage and I got a phone call from the director that they'd just landed Ray Liotta. And I kid you not, I almost cried. Personally, out of fear!

Blake: But this is Ray Liotta we're talking about. This is the same guy who, a full two weeks prior to shooting, and just to get to know me and make me feel comfortable, we went out to some football games, we went out and saw a couple of concerts. By the time the first day rolled around on set, we were comfortable with each other; it just worked out great. Everyone in the cast demonstrated that same kind of helfulness and thoughtfulness. Ashley Judd was just a sweetheart! Seth Green, Joey Pants, Erin Cottrell, they were just so helpful. They knew that I was a first-time actor and were just so giving of themselves to help me out, answer questions, work with me and I give them so much credit because without that kind of continuity, helping to work together, it probably wouldn't have been what it was, so they get all the credit for sure.

Blake: Yeah, y'know, and working with Ray almost daily and watching him and how he conducted himself, he showed up everyday so professional, prepared and ready, in character and I learned -- I mean, I watched him like a hawk. I just tried to glean as much as I could. I hope that, when the day comes that I work on another project, that I remember a lot of the things I learned from him because he was just amazing.

Blake: Yeah! Absolutely. Ryan Wade and Blake Rayne are so connected it's ridiculous. I drew so much out of my own life. That's part of the reason why Yochanan Marcellino wanted to cast me, because there's just so many similarities in my own life to what Ryan Wade went through. From growing up in a poor home, in a very strict, religious home, and wanting to sing and act and do those sort of things, but my parents were emphatic that I had to play sports and I had to get good grades so I could go college and make something of myself. So it wasn't until years later, after college, I was able to even go down the road of my dream, so to speak. Very similar to Ryan Wade. And just the involvement of how he got into the music business, there were so many similarities as well. It was an honor to be able to play the role and I hope I did the role justice for sure.

Blake: The schedule was tough. It was many days, 16-hour days with very little sleep. Being in almost every scene that was shot, you might have a scene one moment where you're laughing or dancing and singing, and just the opposite the next scene where you're crying and it's a very emotional scene. And the next scene you're upbeat again. So it was an emotional rollercoaster to say the least, and by the time we finally got done filming, I felt like I was finally starting to get my head wrapped around it kinda, just in time to wrap [filming]. *laughter* But across the board, though, there's no complaints. It was just part of the process and it was an amazing process.

Blake: My favorite scene got cut and it was a scene with Seth Green and I.

Blake: We actually wrote the scene and it was a very heartfelt, honest kind of a scene. And it got cut just because of time. It is what it is, it happens all the time, but I would say probably my favorite times... it was fun shooting with Seth because he and I are very much alike--same age, kind of just happy-go-lucky guys. That was a lot of fun, but I really feel like every time I was on set with Ray, we were acting, but it was like class was in session as well. I watched everything and had so much fun. I remember, I would take a little booklet with me and leave it by my chair, and after we would shoot a scene, I would write down notes of things that Ray did or how he approached certain things or what his mindset was and why. I still have that journal. It was magic to watch him work.

Blake: I enjoy music history, I enjoy oldies music all the way to modern music and I love seeing where music came from. I think it's crazy and awesome how someone out there named James Hetfield, the lead singer of Metallica, was inspired because he just wanted to be Elvis Presley. Those things are really kind of cool to me. Like that's where rock and roll started out, y'know, in the 50's and it obviously came from other stuff, and how over the years, it's just kind of built upon itself and sometimes remanufactured itself. So there's not too much of music I don't like, really. My music is probably more what you would call modern day alternative indie rock music. But I like it all, y'know? And living in Nashville, you'd think it's all country but it's really not. We have fun just playing every kind of style we can. We might be playing indie rock, but we still have a fiddle player in the band. So it is what it is.

Blake: Wow. I remember as a young man seeing Dead Poets Society. And I was that kid in high school writing poetry and everything else. I was very inspired by it and very well read in all the great romantic poems, but so much of that was just almost the same theme that you see in The Identical, about sucking the marrow out of life and living life, actually. Really living. Following your dreams. So, it's that kind of movie that gets me the most. I'm not a big horror guy or anything like that. But stories that can move you emotionally and you can watch them and be a better person because of it. That's the kind of stuff I really enjoy.

Seth Green and Blake Rayne in The Identical