The world hasn't heard from The Listening for a few years now, but that's all changing quickly as the band has re-emerged with new members, a new EP, and a refreshed vision. The Transmission 1 EP is now available from the band with promise of a new full-length due out next year, so we took some time with front man Gabriel Wilson to discuss where The Listening has been... and where they are going.
This interview took place on: 11/20/08.

Gabriel Wilson: When Tedd T. expressed a lot of interest in working with our band, we jumped at the chance. With our new creative relationship with Tedd, I found it a good idea to move to Franklin, TN to be closer to the record making process with him... What I didn't expect to find in Franklin was such a great community of artistic people who were so open to helping each other out, being friends, etc. Other communities I'd lived in had a bit of a competitive nature in their "scene." Not the case here. It's a great place to live and do business...

Gabe: We progressed throughout 2006 making music and touring pretty regularly in Europe, but at some point we as "The Listening" began to stray away from our vision. Our reason for even being a band was based on creating an environment of music, art, etc by which people would experience the presence of God. When that vision was compromised, all Hell broke loose. And without that vision keeping us grounded and focused, we simply disintegrated as a band and as friends... It took quite some time before I recognized it. I remember it very clearly... My father and mother sitting me down and saying, "Son, since you've ignored your responsibility to point people to Christ with your music and your message, look at all that's happened." Personal tragedies, a horrific van accident, failing relationships, etc... It was a difficult, eye-opening conversation. It has taken a lot of time to rebuild and put the elements back together again. A lot of soul searching, and a lot of contemplation and prayer... It's a bit strange, really, but I put it all into a song on Lovely is Death before it even happened--almost like it was prophetic. "If you don't know where it is you've gone, then go back to the place that you started from." It's what Abraham did every time he missed God's leading. He'd go back to the altar where he last met the Lord, and try to get back on track. In a sense, that's where we've been and what we've been doing - Getting back on track.

Nolan, Josiah, and Kyle have all been friends of mine for quite a few years now. They are all musicians from Longview, WA who were in bands in that area that had grown up around The Listening. (The Harps, Dead Melodies). Nolan was the first to step in as our drummer. Josiah came on board shortly after as our keys player. Kyle came on in January this year... There was a point at which I was contemplating quitting all together. But my friends would say, "Hey, we believe in this music. We believe in you, and what God has done through The Listening's music and ministry... Don't stop! Let's keep it going!" These guys were friends of mine... friends that had stuck by me through some pretty tough situations. They gave me the strength to keep it going, not only logistically but also spiritually and emotionally. Nolan is a pretty incredible drummer-- he's super rock solid. His voice pairs pretty well with mine as he does backing vocals and such. He's also a great guitarist and writer... Though he doesn't play guitar live, he'll often help out writing guitar lines or pitching ideas. Josiah is busy dabbling in everything, from the visual arts of our live show to a rhodes/moog/synth and guitar attack ala Johnny Greenwood. From song to song, he's back and forth from his two stations on stage making as much beautiful noise as possible. I think one of the largest shifts in our band's sound is the addition of Kyle. He's a heck of a bass player. In the past, we've done all of our low end on an old Moog. Kyle uses the Moog at times, and then also a 1967 P-bass for fuzz tones and intricate bass lines. It has added a much more exciting dynamic to our music.

Gabe: Transmission 1 is a short burst of communication, you might say. We've come out on the other side of 3-4 years of feeling a bit lost in space--as if a 'pause' button had been pushed. Though we've been steadily working away on so much new music, we've hardly travelled or made any contact with our fans. It's a creative way of saying "we're back...and there's much more to come." The musical influences are very much the same as they've always been--Pink Floyd, Radiohead, perhaps EU music in general. Those haven't really changed... Tedd T's production has had a huge influence in the sonic shape of the record. He uses much different recording techniques than we are accustomed to using. And with his help, we've been challenging ourselves to write melodies with a bit more sensibility--sorta as we had done in the past on The Listening EP. I've made mention of this before, but there is a HUGE amount of material that we've been working on since we put out The Listening LP in 2005. We've begun recording 30+ songs since the beginning of 2006. With all of that material in the can, we opted to place some of the more "accessible" songs we had written on Transmission 1. The Listening LP was a collection of songs that strayed away from typical song structures. They were more slow moving, mid tempo, not too much energy--more hypnotic than anything. Very melancholy, and quite beautiful... With Transmisison 1, we thought it best to show off the songs that would expand our live show (with more energy), and also show our fans some new facets of our writing... The songs titles? Those are hints... clues to the meaning of each song. The most obvious being "The End." Its hint is "Sweating blood and a game of spin the bottle in a Jerusalem Garden." You'll notice the lyrics speak of love, betrayal, and it not being "the end." It's a song with several references to Jesus and Judas. Jesus sweat blood in the garden, Judas kissed Him on the cheek. Thus the title. I suppose it could be self-indulgent artistry. But I don't know... sometimes it's fun to paint in colours that aren't quite so obvious in their tone.

Gabe: I was trying to capture what the past 3 years had meant to me. The disappointment, the feeling of being buried in so much songwriting and recording. The loss of friendships, the darkness and vacuum a broken relationship brings... And the good things, too... The new sense of discovery, the new sonics, the different techniques of working with Tedd T's recording style (Logic/Digital) vs. our old analogue ways. It was all there. And of course, the internet is a universe all unto itself. It is vast and unexplored. It was like being lost in time and space...

Gabe: Well...again, we opted for the more accessible songs for Transmission 1 for the reasons I've stated. But also, it should be noted the fact that 3 years have gone by since the LP. And as artists, we felt we already created the LP, and it was time to be challenged into new thoughts and ideas, new sounds, tempos, and atmospheres. My head space as a lyricist is shifting constantly as I'm inspired to find better ways of communicating the Gospel, life's experiences, and perspectives... So in a sense, it was both a deliberate move, and yet a very natural progression...

Gabe: A while back, Martin Smith and I were talking and he said to me, "Gabe... do you know what you need to write about? You need to write about Love. Love, discovery, and the Mysteries of Christ--and how they all intertwine." That conversation has been with me ever since. To speak of a broken relationship is to also speak of our broken relationship with Him. The longing, the regret, the remorse, the feeling of having lost your way... All of that. To speak of a relationship being healed is also to be speaking of our healed relationship with Him. The feeling of resolve, of being restored. The ache is gone, and now you have the joy of discovery... In my mind's eye, being a Christian simply means being a man in relationship with Christ. I am married to Him. I am walking in friendship with Him. Whatever frame you'd like to put it in... we are in relationship. It wasn't always that way for me. There was a time in my life where I called myself a Christian, went to church, loved others, etc... But my relationship with God was less of a relationship of friendship and love, and more like an employee/employer relationship--one where I feared Him because I didn't want to piss off the boss and get fired, so to speak. It was all respect and servitude. It was distant and aloof... But now, it's much different. I've discovered a greater relationship--the mystery of Christ in love and discovery, of regret and healing, grace and mercy... So I find myself now writing about relationships--my own, mine with Him, His relationships with others in the Bible (like Judas, etc). I'm fascinated by it.

Gabe: "Prayer in the Dark" is like an auto-biography of my walk with God. There's not much mystery to it, really. As I look back and I survey my life, I'm thankful to have lived this story. I'm thankful to serve a God who answered those prayers spoken from a dark place....

Gabe: "Fight with You" is a song written from God's perspective to someone abandoned, alone, and too weak to fight to live another day. There are several media clips in the beginning and end of the song. They represent all of the confusion and all of the other voices that cloud our perception and keep us from being able to think and hear clearly... "Peace turns into madness" and "colour turns to monochrome" as we go through painful times.

Gabe: We are continuing into a massive exploration of live visual arts during our live show. TV's, LED's, Projectors... Visual arts have been our passion since the beginning of this year, doing our best to communicate even broader and greater messages more effectively throughout our live shows. Also, next year there will be a full-length album. And we are more than excited about it... It's called LMNOP. It is also produced with Tedd T. It will be a nice marriage of our darker tones, more intimate sounds... But at the same time, will display some of the melodic sensibility of Transmission 1. The Listening - LMNOP. Get ready :)

Gabe: It is philosophical in its meaning. The letters LMNOP are essentially in the center of the alphabet. It's our way of saying "we've not reached the end of the journey. Rather, we are in its center." We've found our center... We're right where we're supposed to be.

Gabe: The miracle of redemption...

Gabe: I'd just like to thank JFH for all of the support throughout the past 6 years of my musical endeavors. From Big Star to Tranmission 1, you guys have been so great to us--and even to other bands. You have helped keep indie music in the CBA alive... :) You've given indie music an equal voice among the major CCM voices. I'm very, very thankful for you guys... 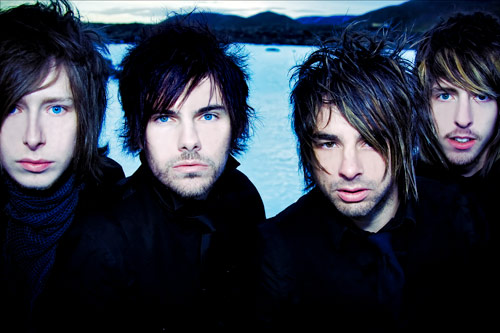