In the flurry of promoting his third solo project, Portable Sounds, we got a chance to chat with TobyMac on the phone about the record before getting a chance to hear the finished product. As we battled the inconvenience of a cell phone speaker versus public background noise, the following conversation unfolded...
This interview took place on: 1/18/07.

TobyMac: I've been good man, just been trying to finish this record and finally got it done. Now I'm just slowly trying to work on some band songs, where it's not just TobyMac but where it's the whole Diverse City band. So I've been doing that the last three or four days. But yeah, just finished my project, I'm really happy with it, [and I'm] getting ready to go on tour!

TobyMac: I think what excites me most is getting it finished! *laughs* No, but when you work that hard on something for that long, y'know? I work on my records for a long time. I love the creative process. I love work day. For this record, I tried to be more organic. I was listening to a lot of motown and Jackson 5 and wanted to sort of lean on - not the programmed side of hip-hop and R&B and even rock - but lean more on organic instruments. Lots of live horns, lots of live strings, and based my grooves on guitar rhythms and let the drums support it. And then from a lyrical perspective... when I first did this solo record, I definitely had this desire to be more heavy lyrically and I sort of just wanted to ramp things up with some hip hop chants and ignite the party. And really, I think I've found a balance between that and maybe a little more depth on some of the songs, a little more vulnerability, and throwing out some prayers that I've been consistent to over the years and put it out there and hope people will connect with it.

TobyMac: It's about a few friends that I've had over the years that I've just lost communication with. I didn't know where they were and I wanted to capture that moment of me not knowing where they were, my concern for them, my wanting to tell them those words that I wrote in that song. It's about losing contact with someone that you love and then thinking that whatever they're struggling with, whether it's created some distance between you and them, that the idea is to love them in spite of their shortcomings and mistakes. But sometimes people run not because they think you're judging them or not because you don't want to embrace them, but simply because they think you won't embrace them. And that song goes out to anyone that feels - it's probably not even a word, but - unembraceable. And yeah, it's been a couple specific scenarios.

TobyMac: I know, actually this tour I'm kind of considering... It's called "Portable Sounds," but really it's not the primary tour. I mean the record comes out late February, and the tour starts in March, so - I like to let a record sort of resonate for awhile before I go out on tour. So I think the primary tour will start in the Fall and I'll hopefully continue into the Spring. And I'm not sure who's gonna be on that yet. Do a few songs on this tour and ramp it up after this.

TobyMac: I did ten of the songs with Chris Stevens. I met him through Paul Wright. He was producing Paul Wright's independent project and then we went on to have him produce Paul's Gotee project. And I met him and fell in love with his production, fell in love with him as a person and just what we bring together. We rely on each other and I think it's one of these things where it feels like a great marriage much like me with Heimermann on the DC Talk stuff. It's the same kind of relationship. He's an amazing talent and it's a privilege to be in a studio with him. So we did ten of the eleven songs together and we probably did the last five songs I recorded on the Diverse City record. I recorded with him and that's when I met him. I was halfway through that project. And then I started this project with him. I did one song with Dave Wyatt, my keyboardist and music director. I have some guests on [the album]. I had Joanna Valencia back on the record. She's been on all three of my solo projects. She's that Lauren Hill-esque singer with a real amazing voice, memorable voice. And I had Nirva guesting on a song. Nirva's on a lot of songs, but she kinda does a step-out on one song to take the verse and the bridge. She's obviously been the amazing female vocalist that's been out on the road with me for the last five and a half years. And of course [on "Lose My Soul"], I have Kirk Franklin and Mandisa from American Idol.

TobyMac: I love "Lose My Soul." I love it. There's a song called "One World" which is definitely right down the middle TobyMac style. *laughs* I mean, just a splash of reggae and a splash of old school R&B, and a splash of hip hop, and all driven by just a nice guitar and bass line. And, y'know, the chorus is sung and the verses are rhymed and the bridge is sung, so it just feels like what I've been doing forever, y'know? I love all the tracks, too, it feels very organic. It reminds me of something that was recorded in the motown.

TobyMac: Overall, I wanted this record to wade in deeper waters without forsaking the party. I think there have been a few prayers in my life that I've been real loyal to and they're concerning things I struggle with - like just a committment to give up my right to myself and not try to control everything in my life but to truly let go and expect great things of God and lean not on my own understanding but lean on Him. That's always my struggle cause I'm a perfectionist. One of the songs is called "Lose My Soul," the one I told you about earlier, is really a simple prayer, "I don't want to gain the whole world and lose my soul." Y'know, which is straight from the Bible, but it's just all the things that I'm striving to be when we're surrounded and inundated with the chaos that the world serves us. It's just a prayer to say, "Alright, I know that this is all attractive, it's moving my very insides, but help me not to lose my soul and lose the heart of - not only what I'm doing, but how I want to live." That's kind of some of the heart of the record and then there's the side where I just want to have a good time as always. Anyway, I think that there's a lot of that missing. I do think there's that missing niche that I always want to fill - that we have every reason to drop the "joy bomb" on this audience. We have every reason to express joy and I think very few songs do that. And I always want to do it and I always want to do it with the right attitude, meaning bring the funk with it, but I have a definite desire to do that and I feel like that is there [on Portable Sounds].

TobyMac: Well, thanks man. It's always my goal but y'never know. It was a fun record to record. I used my band on several songs which was cool. Sometimes they were out of town and I had to use somebody else, but it's great to work with great musicians and we're definitely family out there on the road. And the title Portable Sounds came from a thought that I've had for awhile - I actually had it way back in the day and I partially used it, but I just thought, "Man, I can't get over this thought of 'portable sounds to lift me up, portable sounds to take me higher." And obviously with music going everywhere from our iPods when we're running, to our cars, to riding in the subway, to wheverever you're going. I was in Jamaica last week and of course I'm running in Jamaica with my iPod with my own music, the songs I'm working on, and we can take music anywhere. And that music, obviously, can be something that lifts our soul, that takes us to a higher level of thought and gives people an opportunity to think about being there for each other, about who God is - what He can be to them. I love to write a record [like this record]. It's about human to human relationships, it's God to human relationships, then it's human to God relationships. Anyway, I'm just rambling because I know I can't hear half your questions. *laughs*

TobyMac: Cool man. Well, breaking down the sound, it grooves nice. Every song, even the songs that drive with guitars, still there's a fat groove behind them. It's not going to be a typical rock band sound. I definitely utilize guitars, but I utilize them over beats that make you wanna bounce - And then put the guitar riffs over top of them and find a melody. There's a Toby melody that many times is half-sung, half-rapped, or maybe it's sung then rapped, but it's music for people [who like music]. 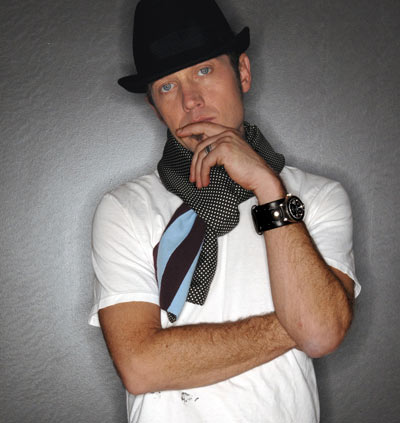