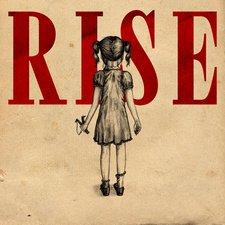 Everyday you need a bullet proof vest
To save yourself from what you could never guess
Am I safe today when I step outside in the wars we wage?

Our future's here and now
Here comes the countdown

Verse 2
Like a hand grenade thrown in a hurricane
Spinning in chaos, trying to escape the flame
Yesterday is gone faster than the blast of a car bomb

And when the scars heal, the pain passes
As hope burns, we rise from the ashes
Darkness fades away and the light shines on a brave new day

Our future's here and now
Here comes the countdown

Behind the Song:
RISE: THE STORY

The album RISE tells a story of a typical American kid transitioning from adolescence to adulthood.

The protagonist in the story is coming to grips with the awful reality that the world is a bitter, dark, violent place. Theres tragedy and injustice at every turn: school shootings, random acts of violence, skyrocketing unemployment and lives destroyed by hurricanes and floods. As these seemingly insurmountable problems pile up outside his window, he struggles with everyday life: fighting with his parents, dealing with feelings of abandonment while living in a broken home, pressure to perform well at school and at work. Sometimes the hardest thing of all is just being believing in your own self.

Faced with fight or flight, our hero decides to take control of the things he can, instead of trying to change what he cant.

This feeling of liberation unleashes a new sense of self. For the first time in a long timemaybe for the first time everhe feels strong and hopeful for the future. That takes us through the albums first two songs, Rise and Sick Of It.

The third track, "Good To Be Alive," is the response to this newfound power. He realizes that sometimes all you need is a second chance to make things better. While trying to live with this new sense of faith and hope, many new challenges come. Our protagonist notices pressure to conform from the outside; from friends at school, parents, the "system or maybe its just internal voices. "You'll never make it" they say. "You'll never be good enough. Never strong enough."

Betrayed by loved ones, our hero feels the abandonment of hope. Let down by parents and friends, the world keeps getting darker. "Not Gonna Die" tells the story of our protagonist putting up a fight to stay alive.

Things reach the boiling point with song number five, "Circus For A Psycho." It seems like the entire world is against him, like some kind of never-ending circus ride. So many voices telling him what to do... who to be. Running home, our hero slams the door, grabs his headphones and falls on the bed. He cranks the volume as loud as possible to turn off the American Noise.

Hes back on track again. Decides that it doesn't matter what anyone says or what they do. He realizes that he has a voice that needs to be heard.

Then the unexpected happens.

After all of the outside world's voices have been silenced and the betrayals forgotten, our hero comes to grips with the worst treachery of all. He realizes that hes been betraying himself every single day. With Madness In Me, he understands that the things he wants to do and say and change about himself are constant reminders that he can never be perfect no matter how hard he tries. Its all becoming a little clearer to him now. Instead of healing the world, he needs to heal himself. He needs to be able to look himself in the mirror and feel acceptance. He falls to his knees in his room. He says, "If there is a God thats listening, I can't make it alone. I need to be saved from myself!"

Our hero decides that if hes ever going to help change the outside world, he needs to look within. On the song "Salvation," he turns to God to help him face himself and embraces his failures.

Life is a roller coaster sometimes.

Sometimes we lose our faith.

Sometimes we hold on to it for dear life.

Sometimes when faith is hard to find we need a light to show us the path.

But through the good and bad, we laugh, we cry, we bleedbut we must always BELIEVE.

change the world. We RISE.