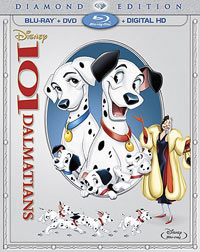 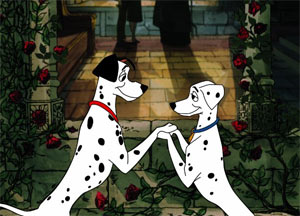 Pick your favorite spot to watch-anytime and anywhere-and get ready for a fun-filled adventure with the Diamond Edition of 101 Dalmatians! Pongo, Perdita and their super-adorable puppies are in for thrills, hilarious spills and an epic action-packed adventure when they face off with Cruella De Vil, Disney's most fabulously outrageous villainess. When Cruella dognaps all of the Dalmatian puppies in London, brave animal heroes launch a daring plan to save all puppies from Cruella's clutches! Unleash all the excitement and suspense of Disney's 101 Dalmatians, a beloved classic you'll want to share with your family again and again! (from Walt Disney Pictures)

The latest Disney classic to get the Blu-Ray, high def treatment is the highest grossing film of 1961, 101 Dalmatians. This beloved animated film not only changed the way animated films were made, but it revived Disney's animation department, keeping it alive when it was on the verge of going under. According to a behind-the-scenes featurette on this disc, each frame was hand-drawn, but then each frame was traced over again with paint on a cel. To save costs, this was the first film that employed the Xerox method of copying the original drawing directly to the cel, saving a great deal of time and money. It's actually what lends to the sketchy, rough look of the drawings in the film. 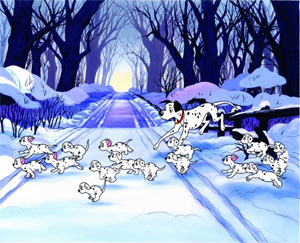 I can't remember the last time I've seen 101 Dalmatians, so it was definitely a treat to revisit it. The story is told from the perspective of a dalmatian named Pongo, whose owner--or "pet" as he considers it--is a musician named Roger. They live the poor bachelor lifestyle, that is, until Pongo spots a beautiful dalmatian named Perdita out for a stroll with her owner Anita, and he drags Roger along to meet them. It's love at first sight and the two couples marry, and before long, Pongo and Perdita are proud parents to fifteen little dalmatian puppies.

And that's when one of the most iconic villains makes an entrance. Cruella De Vil doesn't just look evil (and smoke profusely... actually, nearly every human does in the film!), but just why does she want these adorable little puppies so badly? Because she wants to turn them into... a fur coat! You can't get much more sinister than that for a Disney animated film (especially one involving dogs). She makes a great foil for the story, but, like most Disney villains, she may be a little too creepy for some kids. 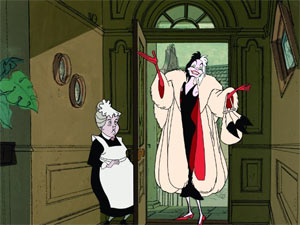 Like most of the animated Disney films from this era, 101 Dalmatians may be a little too slow-paced for modern children, but that's also part of the charm of the movie. There's a little bit of music in the film, including Cruella's theme songs, and some great moments involving the dalmatians in action (and, I didn't quite pick up on it while watching, but apparently--according to another new featurette on the Blu-Ray disc--many characters from Lady and the Tramp make cameo appearances here. But you may have to look really carefully to even spot those titular characters). It's a cute, fun movie, and definitely one of Disney's most memorable classics. It's also the first one to have taken place during "modern" times at the time, instead of just period pieces and fairytales set in distant far-off places.

The content is kind of benign. Again, Cruella's pretty creepy, especially in a couple of her more menacing moments. There's also a short moment where everyone thinks the fifteenth puppy didn't survive being born, but Roger holds it close and pets it vigorously until it comes to life. There's talk about turning the puppies into fur coats and one scene has Cruella's goons Jasper and Horace kidnapping them and struggling with Nanny in their home for them. Back at Cruella's hideout, the guys go after the puppies with a poker to kill them, but they escape. During the finale, there's a big car chase and several car wrecks happen from it. Also, Jasper is seen guzzling from a wine bottle two different times and many of the character smoke cigarettes quite often.

101 Dalmatians certainly isn't for everyone, but it's a sweet little puppy film with Disney flair that represents a classic age of Disney animated filmmaking. Fans of the puppy flick won't want to miss this Blu-Ray release, while canine lovers (and Disney lovers) alike will especially want to revisit or discover this little gem.


The Diamond Edition Blu-Ray release of 101 Dalmatians offers a DVD along with it and a digital copy (Oddly enough, when I redeemed my digital copy, it gave me the 1996 live action version starring Glenn Close instead of this one. Hopefully it's just an error Disney will fix by the time this streets). It's also available in just a plain DVD release. I'm not sure if this is the first U.S. Blu-Ray release for it or not, to be honest, but there appears to be several UK imports available online too. One thing to note, for movie buffs, is that the aspect ratio of the movie is not 16:9. It's the old school standard 4:3. However, there are two options for viewing. You can watch it with black bars on either side, or with additional background art. Both work fine, but the art option seemed a little distracting since it stays stationary while the picture in the middle is moving. Along with the feature film are a few new extras, in addition to the bonus features from the film's original Blu-Ray release.

The Further Adventures of Thunderbolt (1:46) - This little cartoon continues where the Thunderbolt cartoon the puppies are watching left off. It's brand new for this release, but sadly, it's not even two-minutes long. Disney buffs, however, may recognize the voice of Jim Cummings as the outlaw here (he's famous for Winnie The Pooh, Darkwing Duck, Pete from Mickey Mouse Clubhouse, and so many other characters). This story follows a Sheriff and Thunderbolt catching the outlaw.

Lucky Dogs (9:08) - This is by far the best thing here. The animators who worked on the film reminisce about working on 101 and talk about the animating technique, painting cels by hand and this movie being the first Disney movie to use the Xerox method. It's here that we also learn that this ended up being the highest grossing movie of 1961, virtually saving the studio!

Dalmatians 101: Hosted by Cameron Boyce (5:20) - This one's for the kids. Child actor Cameron Boyce gives us "5 reasons why 101 Dalmatians is the best doggone dog movie of all time." The facts are mostly interesting, but Boyce's delivery is annoying. This also doubles as a commercial to plug the summer 2015 film Descendants, in which Boyce will play Cruella's son, among other famous villains' children.

Walt Disney Presents "The Best Doggoned Dog in the World" (1961 Version) (51:05) - This nearly hour-long documentary presentation is directly from 1961 and hosted by Walt Disney himself, as he pays tribute to his canine companions. It was used to promote the film back then and covers dogs all around the world.

Classic DVD Features - Finally, we have all that was previously released on earlier DVD releases of the film, all stuffed into one folder of standard definition extras. This includes: "Redefining The Line: The Making of 101 Dalmatians," "Cruella De Vil: Drawn to Be Bad," "Sincerely Yours, Walt Disney," "Trailers and TV Spots," "Promotional Radio Spots" and "Music and More."

Violence: Cruella slams the door in Roger and Anita's place and the glass shatters; The puppies watch a western on TV where an outlaw constantly shoots a pistol at a pursuing heroic dog. Thunderbolt, the dog, pretends to be dead when shot at. At the end of the serial, he and the outlaw end up falling in a raging river; Jasper and Horace invade Roger and Anita's home while Nanny is the only one home with the puppies. She throws a tea pot at the door and it shatters. While struggling with the thieves, she falls down in the cellar and then the two men take the puppies; Jasper bops Horace on the head; Jasper is seen drinking a lot from a wine bottle. Cruella throws it into the fireplace and it explodes; Cruella smacks Jasper and Horace; Jasper goes after the puppies with a poker to kill them, but they escape; Pong and Perdita attack the bad guys, biting them as they swat at them and try to hit them. Horace falls in the fireplace, burning his rear end. The room gets demolished during this scuffle; A horse kicks Jasper and Horace across the barn; Cruella grabs Horace by the collar and throws him across the inside of the car into Jasper; Cruella rams her car into a truck and is run off the road into a snow bank. She then races it up a hill where the car gets sliced up into pieces and she rams into the back of the truck. Jasper's car crashes into hers, causing a huge wreck. Disclaimer: All reviews are based solely on the opinions of the reviewer. Most reviews are rated on how the reviewer enjoyed the film overall, not exclusively on content. However, if the content really affects the reviewer's opinion and experience of the film, it will definitely affect the reviewer's overall rating.