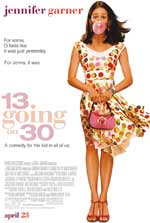 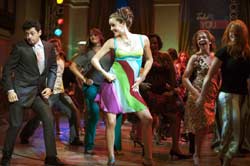 It is 1987 and Jenna is a 13-year-old girl on the brink of womanhood. The problem is that adulthood is just not arriving fast enough. Shes suffocated by her dorky parents, ignored by the hip kids in school and the cute guy she has a crush on, barely knows her name. No longer content to spend time only with her best friend and neighbor, Matt Flamhaff, Jenna invites the cool kids to her 13th birthday party. But the party is a disaster. Jenna is humiliated when shes locked in the closet for a game and everyone deserts her. Alone in the closet, Jenna makes an earnest wish. If only she could be all grown up, shed have the life shes always wanted. Miraculously, her wish comes true. The next day, when Jenna emerges from the closet, its 2004 and shes 30-years old. Whats more, she is a gorgeous successful woman (Jennifer Garner) with a great job and a fabulous Fifth Avenue apartment. She is finally cool and popular. The only hitch? She has absolutely no idea how she got there. Initially frightened but gradually enchanted by her new life, Jenna soon realizes theres something missing -- Matt. When she looks him up, she is horrified to discover that she and Matt (Mark Ruffalo) are no longer in contact and he is engaged to be married. Jenna learns that having it all is not enough and decides to take a second chance at first love. Now her biggest wish is that its not too late. (from 13GoingOn30.com)

I've always had a bone to pick with filmmakers about typical romantic comedies. A lot of them just aren't, well... funny. Most guys run in terror at the sheer thought of films like this, but I must admit I'm a sucker for a romantic flick with an upbeat premise and an overall funny delivery. While I hated the more dismal romantic "comedies" like Notting Hill or Never Been Kissed, it's movies like Serendipity, How To Lose A Guy in 10 Days, and now 13 Going On 30 that are almost totally enjoyable and entertaining.

Now while action films are filled with violence and oftentimes gore and profanity, it's romance films that are often stocked well with innuendo and random sexual content. While 13 Going On 30 holds back from ever treading into "raunchy" territory, it has a few implications and adult themes that secure its PG-13 rating. These moments include the implications that a character is having an affair, a man does a strip tease (all played for laughs), some adult-themed dialog is used in relation to some topics the fashion magazine Jenna works for covers, and a man admits he's gay (and asks if another man is). While most of the content is kept from getting too explicit or out of hand, it is still for the most part unnecessary, and with that fat trimmed off, could have easily transformed this into a wonderful family film. On the other hand, what the content does accomplish, is paint a picture of how awry and off-course Jenna's life has gotten. Instead of it being the dream life her thirteen-year-old self imagined, it wasn't quite what she expected.

The performances were wonderful. It's amazing how alike the young versions of the main characters represented their adult counterparts. Jennifer Garner embodied Jenna Rink, the thirteen-year-old so perfectly. It was easy to believe she really was thirteen inside a woman's body. Mark Ruffalo did a great job playing the faithful friend and underdog

Matt and Andy Serkis, best known for the role of Gollum in the Lord Of the Rings films, was quite fun to watch as Jenna's boss.

The movie will obviously be compared to the 1988 film Big starring Tom Hanks, in which a young kid wishes to be "big" and turns into a thirty year old man one morning. While he was 30 in the same day-in-age that he had been a kid, in 13 Going On 30, Jenna literally wakes up 17 years later all of a sudden inside her 30-year-old-self's body. It takes a whole new spin on the premise as Jenna has to get used to her new surroundings and figure out who she is now that she's 30. And she's responsible for everything she's done up until the moment her 13-year-old self fills in her 30-year-old self! (Confused yet??) As she tries to figure out who she has become and fix any messes she's made, she is learning how unglamorous and difficult an adult's life really is compared to the idealistic views she had. What I really liked about the premise, too, is the way it makes you think about the company you keep. Back in the 80's when she was 13 and longing to fit in with the snobby, popular girls, she didn't see what kind of people they really were. Moreover, she never even dreamed what kind of effect that lifestyle could have on her either. This film really puts it in a perspective for some to consider. Who really were her friends? And how did she treat them? In the end, what would she have done differently?

All in all, my wife and I thoroughly enjoyed this film. They could have left some content out to keep it cleaner for the younger audiences, so it's definitely not one to take the younger ones too. However, I suggest a film editing service like CleanFilms that can edit out the objectionable content. It's really a great lighthearted film with an overall positive message.

Sex/Nudity: Young Jenna tries putting tissues in her shirt to make her chest look formed. Young Lucy tells Jenna they're going to play "7 Minutes of Heaven" in which she'd get time in a closet with a guy she likes to do whatever they like. Lucy blindfolds Jenna and closes her in there, (we even see Jenna removing the tissues from her shirt in anticipation of the boy coming into the room but he doesn't show) but nothing happens. Young Jenna awakens as adult Jenna and finds herself in a small nightgown and soon finds her boyfriend Alex in just a bath towel as he exits the bathroom. She shouts "You're naked!" and he replies "Not yet!" and removes the towel, but she opens an umbrella blocking any nudity just as he does that. In another scene at Alex's place, Jenna asks if they can play Battleship and he uses some innuendo before coming on to her. She nibbles her ears and she giggles (uncomfortable with it) before making him stop. He stops and begins to do a strip tease, removing his shirt and pants (we see him in his briefs) and it's all played for laughs (and nothing happens). At work the next day, a magazine feature title is mentioned that refers to "orgasms". At her desk later on, she reads a note from Alex that implies that the note is explicit but we don't find out what it really says and she throws it away. Moments later, a coworker's husband comes into Jenna's office and kisses her, referring to previous times they've fooled around (before her 13-year-old self enters her present-day body) but she kicks him and makes him leave. Matt kisses Jenna (despite getting married to someone else merely days away). Jenna's boss asks if Matt is gay (because he is a photographer) and she says no, but it's made clear her boss is. A few other references and innuendo is made.

Alcohol/Drugs: Young Lucy tells her friends they should go get some beer. Adult Jenna drinks several piña coladas. The adult Matt asks if Jenna is using any drugs when she tells him she's really 30. Numerous people have drinks during the film.

Violence: We see the silhouette through Jenna's office window of her kicking a man in the crotch. Lucy throws desk items onto the floor in anger. Disclaimer: All reviews are based solely on the opinions of the reviewer. Most reviews are rated on how the reviewer enjoyed the film overall, not exclusively on content. However, if the content really affects the reviewer's opinion and experience of the film, it will definitely affect the reviewer's overall rating.