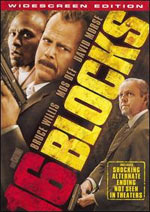 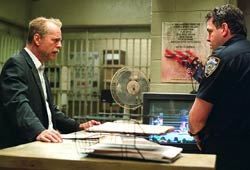 Bruce Willis plays an aging cop named Jack Mosely assigned to take a witness (played by Mos Def) to a New York City courthouse, but they find themselves running the gauntlet as other forces try to prevent them from getting there.
(from MovieWeb.com)

If you had to make a list of the top 10 action hero movie stars of all time, there's a very good chance Bruce Willis would make the list. With a smirk, sarcastic wit, and a gun in hand, Willis has torn up the silver screen in quite a few well-known (albeit ultra-violent) action films in recent years. Now at fifty years old, Willis has chosen one of his most unique roles to date in action thriller 16 Blocks. Sporting thinning hair, a mustache, scruff, a limp, pudge, and weary eyes, Willis steps into the shoes of NYPD detective Jack Mosely. What's refreshing about the way Willis plays Mosely is it's easy to forget it's even Willis most of the time. Mosely is so opposite of typical Willis characters that it was interesting to watch and see where Bruce would take the character throughout the film. Jack isn't predictable either, and with how troubled director Richard Donner paints his life, it makes the story all that more intriguing. A few moments slow in pacing to match the speed of the hungover lead character, but it all works together for the story. I appreciated the filmmakers' attempts at making an action film that seemed more realistic or tangible than say an Armageddon or even Die Hard.

I was curious how pairing Bruce Willis with the likes of rapper-turned-actor Mos Def would be. I enjoyed Def's performances in The Italian Job and last year's Hitchhiker's Guide To The Galaxy, and it's been neat to see how different each of these roles are. In 16 Blocks, Def dons a more nasally vocal delivery as he plays a criminal who is to be escorted sixteen New York City blocks from jail to the courthouse. While Def's character is meant to talk a lot, it's not exactly done in the Chris Tucker Rush Hour style, although Def does tend to be funny at times. Instead, much of the film is handled less like a mindless action film and more like a police action drama. And this is why 16 Blocks works as well as it does. Some may find the premise uninteresting, but it's the character dymanic that really drives the film. 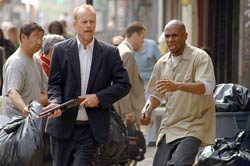 Another thing that makes 16 Blocks stand out from a sea of been-there-done-that's is a positive and hopeful message. While message films can be nauseating and even offensive, Donner and company do a fine job bringing home a theme of change and redemption. By the time the film wraps, completing this theme, it doesn't feel preachy, but is likely to instead leave a hopeful feeling among the viewers -- something I certainly have no gripes about.

But while I found plenty to like about 16 Blocks, there is still a gritty nature to the film that holds it back from all it could have been. The language is its biggest hangup. While blasphemy was limited to a couple offenses, there are a almost twenty "s" words as well as a series of other colorful words including two uses of the "f" word before the film's end. Why they felt this was necessary for the film is beyond me. Finally, the violence is rough although toned for the PG-13 rating. We see several people get shot, with quick glimpses of bullet wounds through clothing (after they happen). Also, when a character is shot through the hand, we briefly see the bloody hand as they rinse it off in a sink.

I don't know what I was expecting when I walked into the theater for a showing of 16 Blocks, but I can definitely say I was pleasantly surprised with its outcome (sans the profanity). I recommend checking out the film perhaps in an edited form via CleanFilms.com or a similar edited DVD service when the film comes to video. Willis proves with 16 Blocks that he can do more than just look good wielding a gun to save lives. I'm interested to see what he does next...

Alcohol/Drugs: There may be some drugs at a crime scene at the beginning of the film; Jack is drunk or suffering from a hangover through most of the film; We see him pouring liquor into a paper cup while on the job; While escorting Eddie, Jack stops to get a bottle of alcohol at a liquor store; Jack drinks a shot at a bar

Violence: There is quite a bit of gun-related violence with several character shot throughout the film, with a few being fatal, etc... Disclaimer: All reviews are based solely on the opinions of the reviewer. Most reviews are rated on how the reviewer enjoyed the film overall, not exclusively on content. However, if the content really affects the reviewer's opinion and experience of the film, it will definitely affect the reviewer's overall rating.