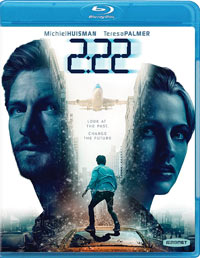 A man's life is derailed when an ominous pattern of events repeats itself in exactly the same manner every day, ending at precisely 2:22 p.m. (from IMDB.com)

While movie fans are likely to hear about a seemingly endless stream of new films coming out all the time, there are still many films that just fly really low under the radar and never get discovered. Sometimes this is because of poor marketing, but many times it's because it just doesn't offer the needed star power to attract attention or, ultimately, just isn't a good film. 2:22 is one of those little indie films that has flown almost completely under the radar. Starring Michiel Huisman (The Age of Adaline, Game of Thrones) in the lead role as Dylan, alongside Australian actress Teresa Palmer (Hacksaw Ridge, I Am Number Four), 2:22 is about an air traffic controller whose life goes awry when a mistake he makes nearly causes two planes to collide on the runway. After he's put on suspension because of the mishap, he meets a girl named Sarah who just happened to be on one of those planes. With this happenstance, he begins to notice a series of patterns forming in his life over and over each day, all revolving around 2:22 in the afternoon.

I liked Michiel Huisman in the sorely underrated The Age of Adaline, but I'm not sure he has the acting chops or screen presence to carry a film like 2:22 as a leading man. But, to be fair, it could also be a lack of experience from director Paul Currie or just not that interesting of a story at the core of 2:22. It's an interesting premise, but once the audience starts to learn what everything is leading up to, it's a little disappointing. That isn't to say 2:22 is a complete loss, though; the revelation at the end is still pretty interesting. However, the nature of the story brings in topics of conversation that could easily turn off many viewers (including readers of a site like JFH). I can't give away what the topic is without spoiling the movie and ultimately "the twist," but it's different and rather unexpected. (I will, however, reference it in the special features review after this movie review if you must know what it is. But also heed that as a spoiler alert!) The nature of the twist pulls the viewer out of the reality the film is trying to create, giving it more of a fantastical premise than a creepy truth. The obsessiveness Dylan falls into is reminiscent of Nicolas Cage's character in Knowing, and I'd say this film carries a similar tone to that one (although, Knowing had an element of horror mixed into the thriller, whereas 2:22 does not). But even despite decent production values, 2:22 still manages to feel small. Maybe it's the lack of main characters -- there really are only about three core characters, and even then it's actually just two -- or it's how much the plot relies on coincidence, but the movie has the feel of an indie film. Huisman does the best he can with the material at hand, but he just doesn't have a very intense presence. He worked so well in Age of Adaline because he plays the ultra nice guy all too well, and that movie really called for that type of character. Dylan is mostly that same kind of nice guy, but when Dylan starts to get unhinged, it just starts feeling like a second rate production. Unfortunately, Huisman has trouble selling it. Palmer has more experience in a wide range of roles over the years, but she's hardly leading lady status. She and Huisman do play well together, but there isn't even the spark there that Huisman had with Blake Lively in Adaline (and even that wasn't that magnificent of a pair-up either). I think, to really make a story like 2:22 work, you'd need an on-screen couple that feels wrong to be kept apart (maybe like a DiCaprio / Winslet Titanic kind of match-up), and I'm afraid Huisman and Palmer just don't have that. 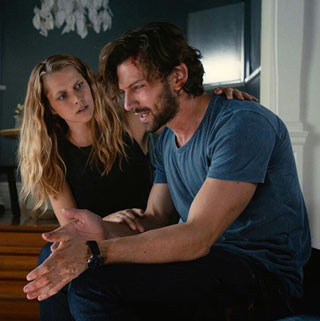 Don't get me wrong; while 2:22 lacks, it isn't unwatchable. You probably won't finish it thinking you want your hour-and-a-half back, but it's probably more so forgettable, too. Huisman still carries a bit of that "every man" kind of relatability, even if his story doesn't feel like something you can easily relate too. The first half of the film is the strongest, as we follow Dylan around New York and his daily routine, and as he tries to decipher the patterns he's seeing all around him. When Sarah's art gallery mate Jonas (Sam Reid) is introduced, it doesn't really seem to fit right with the story. And when Dylan's coincidental experiences crescendo when he visits Jonas' gallery, it all begins to feel too convenient. It goes from subtle to way too forced and it's a bit jarring -- especially when the film had still felt relatively tangible up until that point.

The content for the film isn't too bad actually. There's a little bit of language, but it's rarely used (including a softly mouthed "What the f---?" as Dylan tries to figure out what's going on in one scene). There is a sex scene, however, but there's no nudity and it's relatively brief. Still, it's annoying to have yet another romantic story take the main characters to the sheets so quickly. (Is no one else tired of that?) Finally, there's a little violence, with some black-and-white photos showing characters lying dead in pools of blood, as well as a character with some blood on their shirt later on in the film. Otherwise, the film is relatively tame.

If you've never heard of 2:22, there's probably a good reason for that. While you wouldn't be missing a whole lot if it passed you by, there are certainly worse thrillers you could find on NetFlix or see in theaters than this one. And I can honestly say this lower budget indie film is a better movie than Michael Bay's big 2017 summer blockbuster (which releases on Blu-ray/DVD the same day), so that should probably count for something.


2:22 is available in on Blu-Ray disc, DVD, and through the usual digital movie providers. The regular Blu-Ray disc has a few bonus features on it:

Time with the Story and the Characters (12:29) - (**Note, I mention a spoiler here**) The cast and filmmakers talk about the film's production. It includes long clips from the movie in between the interviews. The featurette also talks about the topic of reincarnation and how it plays into the film's story.

Re-Creating New York and Grand Central (6:20) - It seemed unlikely that the film would have actually shot in the real Grand Central Station, but I was still surprised to learn they recreated the famous train station on a set in Australia. We also learn that they filmed some reference footage in NYC before moving to Australia.

Lastly, the film's Theatrical Trailer is included, as well as previews for other Magnet productions.

Alcohol/Drugs: Dylan and his coworkers have drinks in a bar; Dylan and Sarah drink at a restaurant

Blood/Gore: After a car accident, we see blood on Dylan's head and hands. The driver has some blood on his face; We see a poster of a woman as a bloody murder victim; We see black and white photos of a couple people lying dead in pools of blood; We see some blood on the shirt of a person who's been shot.

Violence: In a dream Dylan has, two guys in Grand Central Station pull guns out and shoot at each other off screen; Two planes narrowly miss colliding; A car almost hits Dylan; Glass shatters in windows in Grand Central Station; A clock sparks and short circuits; A couple times we see car accidents outside his apartment window; A truck hits taxi and flips it; Dylan shoves Jonas and the two fight a little bit on the floor; Dylan's exercise straps break and he falls to the floor; A large chandelier crashes to the ground as people run; Dylan smashes windows in his apartment; Dylan smashes a lock with a fire extinguisher; Dylan is shot at as he jumps through a window; A man is shot, there's some blood on his shirt; Another man is shot and killed. Disclaimer: All reviews are based solely on the opinions of the reviewer. Most reviews are rated on how the reviewer enjoyed the film overall, not exclusively on content. However, if the content really affects the reviewer's opinion and experience of the film, it will definitely affect the reviewer's overall rating.