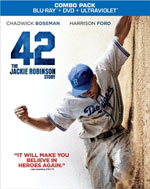 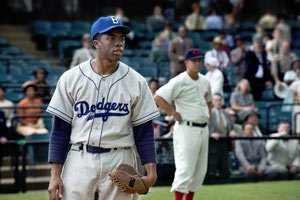 Hero is a word we hear often in sports, but heroism is not always about achievements on the field of play. "42" tells the story of two men-the great Jackie Robinson and legendary Brooklyn Dodgers GM Branch Rickey-whose brave stand against prejudice forever changed the world by changing the game of baseball. In 1946, Branch Rickey (Harrison Ford) put himself at the forefront of history when he signed Jackie Robinson (Chadwick Boseman) to the team, breaking Major League Baseball's infamous color line. But the deal also put both Robinson and Rickey in the firing line of the public, the press and even other players. Facing unabashed racism from every side, Robinson was forced to demonstrate tremendous courage and restraint by not reacting in kind, knowing that any incident could destroy his and Rickey's hopes. Instead, Number 42 let his talent on the field do the talking-ultimately winning over fans and his teammates, silencing his critics, and paving the way for others to follow. (MovieWeb.com)

When young people think of sports today, it's probably very hard to imagine baseball during the time of segregation. Furthermore, it's probably hard to imagine the things baseball legend Jackie Robinson had to go through being true to life. As a child of the 80s myself, I was born long after the events in the film 42: The Jackie Robinson Story. I was a huge baseball fan when I was a young teen (and before I fell in love with music and started this site), but I was more familiar with stories like in the film A League of Their Own than one like Jackie Robinson's. Director Brian Helgeland (2001's A Knight's Tale and 2003's The Order) returns to directing after a seven year lull to bring Jackie's story to the big screen. What the movie focuses on mostly, however, is the racial battle Robinson fought as his career graduated from the Negro League baseball to being a member of the all-white Brooklyn Dodgers. What unfolds is a mostly dramatic depiction of the story that focuses more on his experiences off the field than on it. It works wonderfully as a modern portrait of racism back in the 1940s, but as a true story about Robinson, it's rather inaccurate at times.

The best thing 42 has going for it is solid acting and some great period baseball scenes. Chadwick Boseman is really good as Jackie Robinson, and he really makes you feel for everything he has to endure. Jackie keeps his composure through some truly painful tests of his patience, but the film depicts a scene where he heads behind the dugout and smashes a baseball bat in anger (Friends close to Jackie insist this didn't happen, and the director has supposedly admitted to including it because he believes there's no way Jackie didn't crack under the pressure at some point). But Boseman certainly looks the part and really helps the audience feel for him. Meanwhile, modern acting legend Harrison Ford steps in to play the role of a real person this time around, Branch Rickey, the Dodgers organization executive who believes Jackie is right as a member of the team. While I'm certainly a fan of Harrison through the years (and not just as Han Solo or Indiana Jones, although those are my favorite roles of his), Ford typically tends to play the same kind of character and be undeniably "Harrison Ford" in his roles. But here, Ford transforms into Rickey, changing his appearance, voice, demeanor--everything--to become Branch Rickey. This is easily his best performance in years (I'd love to see the Oscars recognize him for this role, too), and it's inspiring to see Ford embody the God-fearing man Rickey was. Frequently a funnyman, Alan Tudyk plays a ruthless racist as the Phillies coach who hurls degrading insults at Robinson while he's up at bat. Tudyk does an incredible acting job, but you just hate him in such a despicable role. The rest of the acting is pretty solid as well, helping to cement the period feel and make Robinson's story come to life on the big screen. However, composer Mark Isham provides the music for the movie, and it feels a bit too larger-than-life at times, feeling more cinematic than is probably necessary to convey its realism. It almost makes the film feel more fictitious. Also, Helgeland, who wrote the film as well as directed it, left some of the best scenes for the end of the movie. By the time we're through the fire of Jackie struggling with being accepted by his teammates and audiences, and Jackie is finally tasting triumph, the movie is over. I wished it had a few more happy moments than just the finale (which, according to the Wikipedia page for the film, isn't even the way the game played out in real life, which is unfortunate).

Other than a few almost-violent threats on Jackie's life, the film had potential for being suitable for the family. However, the language content for 42 is pretty rough at times. As you might expect, the derogatory term "n*gger" is used roughly 60 times in the film (I counted 60 including some crowd noise from the game audiences where I could make it out). Other than that, there are a few uses of blasphemy, unfortunately, and a few other colorful words and phrases. There's some implied adultery with the Dodgers manager which shows him asleep in bed with a famous actress at the time, and we see players in towels and shirtless in their locker room, but there's nothing explicit shown. Finally, there's a little bit of violence, mostly related to aggressive full-contact baseball plays, but there's the aforementioned bat-smashing scene and a scene where a player jabs his cleat into Jackie's calf during a game that causes him to fall to the ground in pain. We then briefly and partially see him being stitched up in the next scene.

If you're a diehard Jackie or Dodgers fan, 42 is certainly for you. I also highly recommend it to loyal fans of Harrison Ford as well. He truly shines in this movie. While some apparent artistic liberties were taken for the sake of dramatic effect and entertainment, 42 is still a good portrait of American history at a time when segregation played a shamefully big role in our culture. It's encouraging and triumphant to see Jackie stick it out and rise above the racism, while real life people like Branch Rickey helped take a chance on Negro players to make way for them in the majors in the future. It's certainly not a light film, but it's still a pretty good one, and well worth at least one viewing.


42: The Jackie Robinson Story comes home on Blu-Ray and DVD in a combo pack or single disc DVD or through digital retailers. The picture is beautiful in HD and really brings the color to life. It makes the audience in the stands look crystal clear, as well as the grains of dirt on the field. It looks fantastic. Along with the feature film are a couple little featurettes:

Behind the Scenes: Stepping Into History (9:14) - The first of three short featurettes focuses on Harrison Ford choosing to play the role of Branch Rickey and doing his best to become the real life character. Ford admits here that he tried his best to not be "recognizable" as Harrison Ford. They then talk about the portrayal of Jackie and how Chad was chosen to play him. Overall, it's a great little look at the film's main talent.

Behind the Scenes: Full Contact Baseball (10:05) focuses on the sports aspect of the film, and how they scouted to find the right baseball stadium to fit the movie. In the end, they settled for Rickwood Field and constructed one of the largest green screens in the outfield to provide the audience in the stands digitally. They then talk about the realism of the game shown in the movie and how the actors went through training with real players to prepare for filming.

Short Feature: The Legacy of the Number 42 (9:17) is dedicated to Robinson's legacy and the impact he had on the game and people's lives. Here we hear from the legendary Hank Aaron, the real life people who actors represented in the movie, and the cast. It's a great little featurette too.

Sex/Nudity: We see Dodger manager Leo Durocher in bed, shirtless with a woman--both asleep. A call from Rickey wakes him up and she wakes up too (we partially see her in a lacy top, but nothing explicit is shown). At the end of their call, Rickey tells him that the Bible has something to say about adultery. After he hangs up, Leo says to the girl "What am I going to do with you?" and she says suggestively "Don't you know?" (or something like that); In another scene, we see Leo lying shirtless in bed in just his boxers; We see a player wearing just a towel in a locker room while Jackie sits there shirtless in a towel. The player asks Jackie why he doesn't shower with the other players and Jackie says he waits till everyone's done so the others won't feel uncomfortable. The player then tells him to join him in the shower and he realizes how that sounds, so he corrects himself and tells him he wants Jackie to shower with the rest of them and he stumbles over how that sounds (but he didn't mean it in a gay way). We then see the guys in the shower from the torso, up, and Jackie comes walking in; We see Jackie's wife in a little camisole that shows a little bit of cleavage. Jackie kisses her on the chest in the middle where the neck scoops low. They hug and the scene ends (it's not meant to be sexual).

Alcohol/Drugs: We see some guys outside a bar with beer bottles; A player is shown drinking a beer; We see a player pour himself a drink in his room.

Blood/Gore: We briefly see Jackie lying on a table face down with someone stitching up his calf. The camera then changes and we see a slightly bloody gash on his calf with a nurse holding strings above it (having finished stitching it up).

Violence: A player plows into and knocks over the catcher during a game; We hear about some people coming to threaten Jackie at his house and run him out of town, but he leaves before it happens; Jackie bowls over the catcher; Leo throw pans around in a kitchen before yelling at his players; Leo slams something in his office and leaves; Jackie violently breaks his bat on the wall and screams; We see Jack hit in the head with a ball which leads to a brawl; A player on the opposing team deliberately jabs his cleats into the back of Jackie's cleat as he stands with his foot on the bag. Disclaimer: All reviews are based solely on the opinions of the reviewer. Most reviews are rated on how the reviewer enjoyed the film overall, not exclusively on content. However, if the content really affects the reviewer's opinion and experience of the film, it will definitely affect the reviewer's overall rating.