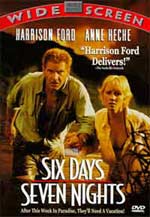 - for language, sensuality, and brief violence.

Robin Monroe (Anne Heche) is a magazine editor living in New York. When her boyfriend, Frank Martin (David Schwimmer), books them for a vacation from the frigid city winter for a vacation paradise on a tropical island, she's ready to drop everything.

They take a run-down, small plane, flown by cargo-pilot Quinn Harris (Harrison Ford), to the island where Frank immediately proposes to her. When things are just starting to get comfortable, an unexpected assignment forces Robin to hire Quinn to fly her to Tahiti for a one-day photo shoot. During the flight, a severe storm damages their plane and forces them to make a crash-landing on an unknown island. The damage is bad enough that they cannot take off again or radio for help. Learning of the plane never reaching its destination, Frank begins to worry and takes comfort in the company of Quinn's young & beautiful girlfriend, Angelica (Jacqueline Obradors), as both wonder what happened to their mates. Knowing that they could be on the island for a "long, long, long, long, loooong time," (as Quinn states) they must cope with their differences and try to figure out how to get off the island while facing other dangers.

Six Days, Seven Nights is an average film that I found dampered heavily by its content. And as I sat in the darkened theatre watching the new Ford movie, as he stars with Heche, I couldn't get a thought out of my mind. Heche is openly a lesbian who has brought her personal beliefs and politics into everything she's done as of late. When she was more quiet about it, letting her talents be what garnered her the most attention, it was easier to take her acting more seriously. Unfortunately, her sexual preferences have gotten in the way of that, inevitably making the love angle of Six Days, Seven Nights undoubtedly contrived and forced pitting her with Ford.

As far as the content goes... First of all, the sex. In one scene, they show the bare back of Angelica, and the action of her taking off her top just until it's totally revealing (then they switch to rear view before showing the audience anything explicit). Plus, both Robin and Angelica wear rather skimpy clothing throughout the duration of the film. And that's not to mention some scenes of innuendo, and other comments letting you know they have no problems with premarital sex. The language is just as bad. From one "f" word to multiple uses of the "s" word and an instance where Quinn humorously goes into the bushes and curses profanely (instituting mumbled cussing, including an S.O.B. and a possibly "f" word). There are also a few quarrels between Quinn and Robin that include him commenting on her physique, using the slang word "t*t" and the "a" word in regards to her appearance. Robin also gives Quinn the finger in one scene. Pertaining to the film's violent content, we see a man get shot by pirates, but there is no blood; Robin gets a minor cut on her forehead, and Quinn's shirt is rather bloody after he is injured. The violence is overall pretty mild, which was somewhat refreshing for an action comedy.

So, can I recommend the movie? Besides it not being very good, I wouldn't suggest it for the content alone anyway. For those who are fans of any of the cast, this film has its share of romance, adventure, and comedy to satisfy a large variety of moviegoers, but it just felt second rate at best to me. For those still interested in it, maybe just wait for it on television, don't waste the theater ticket or rental.

Sex/Nudity: There is an abundance of revealing outfits in the film -- especially for Heche & Obradors; about 4 or more instances of innuendo or sexually-related dialog; Quinn has to reach into Robin's pants to get out a snake, but they're in the water (so you don't really see anything); Angelica takes off her bra (shows the action, but switches to her bare back before anything is seen) & shows herself to Frank, then covers herself; Angelica does a "sensual" dance at the island on stage for a performance; as Robin changes clothes on the island, we see her bare back & the side of her chest for a moment.

Alcohol/Drugs: Quinn gets drunk a couple times; Robin gets "tipsy" from some prescription tension pills; Angelica & Frank have sex partially because they're drunk; they drink tropical drinks, beer, & liquor.

Blood/Gore: Quinn's shirt is bloody after he is injured; There is a cut on Robin's forehead.

Violence: Pirates shoot a guy; shoot at Quinn & Robin, tearing a rubber raft to shreds; they shoot mortars at the plane; a boat blows up from a mortar; the plane crashes. Disclaimer: All reviews are based solely on the opinions of the reviewer. Most reviews are rated on how the reviewer enjoyed the film overall, not exclusively on content. However, if the content really affects the reviewer's opinion and experience of the film, it will definitely affect the reviewer's overall rating.