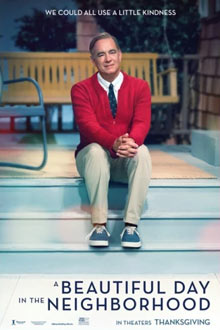 A Beautiful Day in the Neighborhood

Based on the true story of a real-life friendship between Fred Rogers and journalist Tom Junod. (from IMDb) 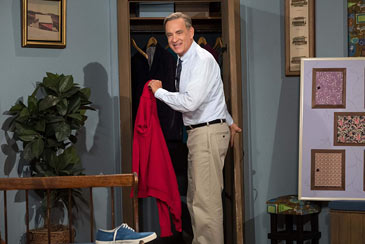 Sometimes our own preconceived assumptions and perceptions of a film, going into it, are not exactly fair. With a movie like A Beautiful Day in the Neighborhood, it's really easy to assume we're getting to see a film that is fully devoted to telling a biographical story about famous children's show personality, Mr. Rogers. And with a movie star like Tom Hanks filling in for Fred Rogers, it's especially easy to assume that a film called A Beautiful Day in the Neighborhood is all about the man himself. However, this isn't exactly the case.

A Beautiful Day in the Neighborhood is about Mr. Rogers, but more so indirectly. The story follows a journalist named Lloyd Vogel, based on a real life journalist whose real name is Tom Junod. This film tells Lloyd's story entirely from his perspective. The real life Junod had written an article for Esquire magazine in 1998 called "Can You Say... Hero?" (the full, real article can be found here). This film is "inspired by" this article, and the profound impact Rogers had on Junod's life.

A Beautiful Day in the Neighborhood opens with a recreation of the television show, Mr. Rogers' Neighborhood, completely presented in the standard square television format of years ago, and even in standard resolution. Hanks as Rogers acts out the show as if it were a real episode of the show back in its heyday. Rogers talks to us as if we're the audience of the show, but then twists the presentation of the show when he presents a board made up of little doors that have faces of familiar people hidden behind them--and he opens one to reveal Lloyd Vogel's face with a bloodied nose. It's a surreal and strange way to introduce the film's story, but they stick with the show format up until the point the show transitions to Lloyd's New York City location and we see the traditional miniatures of the Neighborhood show set taking us to that location. It's only then that the film expands into a widescreen movie with modern, high definition screen resolution. It's quirky and artful, and it's definitely a unique way to present the story, yet there's also something off-putting about bouncing in and out of this format. 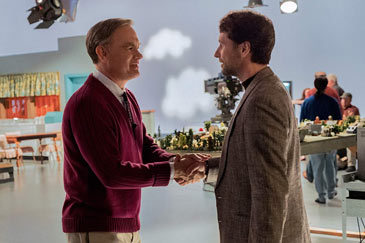 From the start, the film is a thematically weighty one. The themes of anger, hurt, forgiveness and healing run steadily throughout, and it's almost unfathomable to realize the film is only rated PG. While it's not bogged down with lots of edgy content, it's hardly a kids film. Still, while Mr. Rogers wasn't shy about tackling serious topics on his show, this feels like a very mature film. Throughout the course of the movie, we're right alongside Lloyd as he wrestles with the pain his father caused him and his mother, and the intense anger he feels towards him. In fact, anytime his father, Jerry (effortlessly portrayed by the consistently strong Chris Cooper), strikes a nerve with Lloyd, the film's soundtrack would feature feedback and slightly dulled audio as Lloyd struggles to contain his fury. We learn over the course of the story some pretty serious wrongs Jerry committed in Lloyd's life, and it's not hard to feel for him, and even understand why he's so angry. But the hurt he harbors affects every part of his life, even giving him a prickly reputation as an investigative journalist known for ruffling feathers. When he's tasked by Esquire magazine to do a short, 400-word profile on Mr. Rogers for a cover story about heroes, he reluctantly reaches out to the TV star with the intent to expose the man as anything but sincere. But it's in his interactions with Fred that he begins to confront his own pain and shortcomings -- which actor Matthew Rhys portrays with great vulnerability and honesty.

The PG rating works, for the most part, with the content, but again, the themes are anything but light. Furthermore, there's a dream sequence that Lloyd has that is surreal and mildly disturbing (I'd think it'd be especially unsettling for younger viewers), that shows him working through his own childhood and trying to figure out Fred Rogers. Director Marielle Heller approaches the whole film like an indie picture through a creative and artsy lens, but it makes the movie a tough one to really figure out what audience it's aimed at. Granted, anyone who grew up with the Mr. Rogers' Neighborhood show is well into their adulthood, but there's a childlike approach to how the film processes our pain and hurt that makes it seem like it's a lesson for children. However, it's also the way that it taps into the viewer's vulnerable youth through nostalgia that makes this a lesson for anyone who's left their childish ways far behind and could really benefit from a simplified presentation of some very real, very serious adult situations and circumstances. It's a reminder that sometimes forgiveness isn't nearly as complex as we can make it out to seem. 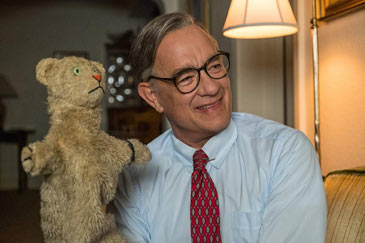 With that said, the content contains a violent outburst at a wedding where Lloyd takes a swing at his father and someone nearby slugs him back (hence the aforementioned bloody nose). Later, a character suffers a heart attack during an argument, and the topic of sickness and death are weaved throughout the story as we see two separate characters confined to hospital beds while dying (in two separate instances). We also find out that a married man had been sleeping around while his wife was sick (we don't see anything portrayed on screen). Jerry is also portrayed as an alcoholic who is frequently drunk, and we see him this way several times during the film. Lastly, language is mild but present, with a few uses of "Oh G-d," "h*ll," "d*mn" and "cr*p." Lastly, it was no secret that Mr. Rogers was a man of faith, and this is lightly touched on. It isn't spotlighted much, but his wife tells Lloyd that Fred seeks out peace in scripture, for one thing, and it mostly shows this in a positive light at least.

A Beautiful Day in the Neighborhood is a deep and emotional film that is uniquely presented and expertly acted. It's probably not what most would expect from a film that is somewhat "about" Mr. Rogers, but it's a fantastic film that repackages the themes of anger, hurt, pain, and forgiveness and presents them in a moving and impactful way. If you can relate to any of these struggles, this film may actually therapeutically help you in processing and dealing with them -- just don't assume the PG rating means this is one to take the little ones to.

Sex/Nudity: We find out that a married man had been sleeping around while his wife was ill.

Alcohol/Drugs: We see Jerry drunk in several scenes; Jerry and Lloyd have a drink together in one scene. (Other times, Lloyd turns down Jerry's offer of a drink)

Blood/Gore: Mr. Rogers opens a cardboard door on a board that has faces hidden behind little door,s and it reveals Lloyd's distressed face with a blood on the bridge of his nose; After getting punched in the face, we see Lloyd's bloody nose from the previous image. The film then freezes on his face and returns to it on Mr. Rogers' board; We see the cut on Lloyd's face, accompanied by a black eye, in various stages of healing as the film progresses.

Violence: Lloyd punches his father in the face and another man punches Lloyd in the face as people rush to break up the fight and subdue an angry Lloyd; A man yells at another man, and the latter collapses to the floor while having a heart attack; In a dream, we see a woman lying sick in a hospital bed; We see a person lying in a hospital bed apparently dying from a sickness. Disclaimer: All reviews are based solely on the opinions of the reviewer. Most reviews are rated on how the reviewer enjoyed the film overall, not exclusively on content. However, if the content really affects the reviewer's opinion and experience of the film, it will definitely affect the reviewer's overall rating.