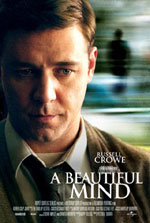 In 1947, John Nash (Russell Crowe) is a brilliant mathematician who wins a scholarship to Princeton University where he hopes to develop a truly original and break-through idea of his own. His idea scored him and two colleagues a job at the MIT campus of Wheeler Defense Labs where they work as contractors for the U.S. government. It's there he's given a class in which he meets Alicia Larde (Jennifer Connelly) a smart physics student who immediately finds him intriguing. While at Wheeler, he meets a government agent named William Parcher (Ed Harris) of the Department of Defense, who signs him up for his code-cracking skills on some very top secret cases. He keeps the information from everyone, and as the severity of these cases affect his life, he develops an increasing sense of paranoia. As his new wife Alicia tries dealing with his behavior, it's up to her and his friends to decide what it is he really is involved in or if he's involved in anything at all...

A Beautiful Mind was nothing what I expected it to be, which actually fits with what some of the characters in the film experience. I don't want to talk too much about the plot, because the more you know ahead of time, the less of a surprise certain key plot developments are. A Beautiful Mind is based on the true events of mathematician John Nash's life. Brilliantly acted out by Russell Crowe, the story covers a lot of key moments in Nash's life, including many of the hardships he and his wife had to endure. This made for one depressing (for the most part) film. While the film does have its lighter moments, this is a weighty film in emotion. The characters are fleshed out are real the way they are portrayed here, and Ron Howard does an amazing job directing this piece. There are many surprises-- none which I hope to give away -- making for an enjoyable experience, but I, personally, found the movie a little more depressing and heavier than I prefer. While the film gives you a greater appreciation for the kind of man Nash is and the things he and others like him have to go through, it doesn't make for a cheerful 2-plus hours of film. However, not all films must be laugh-fests or non-cerebral films, I just don't prefer ones that are far from uplifting, and I personally didn't find this one too uplifting. 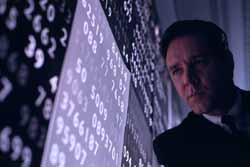 I don't really like Russell Crowe. That's not why I wasn't thrilled with this picture, but that has just been my stance on Crowe "the man" not Crowe "the actor." This is actually my first Russell Crowe feature, since most of his flicks are rated R and no, I didn't see Gladiator (yes, yes, I know... so what :) ). But let me just say that Russell Crowe delivered a jaw-dropping amazingly good performance in this film. I was sold on his portrayal of John Nash, and I can't imagine anyone doing a better acting job. It was down-right phenomenal. Jennifer Connelly did a great job portraying his wife Alicia. This is actually only my second Connelly film, following her 1991 film The Rocketeer, considering that was probably her last watchable film (and one of her only). It was great to see her use her talents in a non-physical way.

Content-wise, A Beautiful Mind is PG-13 for good reason. Not especially violent, but includes a scene where we see Nash's arm is very bloody, and we see a brief glimpse of him picking at the gory mess looking for an implant he believed was there. In other blood-related sequences, we see some blood on his head when he bumps in on a window pane and in another shot we a bloody cut on his arm where something is inserted under his skin. As far as sexual content, it is mostly dialog-related where Nash awkwardly and bluntly tells women in two separate instances that he just wants to have "intercourse" with them. A lot of the sexually-related dialog is really unnecessary and should have been left out. It was included to show just how bad with people Nash was, but it was needed. There is also a brief shot of infant male nudity while it is being bathed. Language is moderate with 4 "s" words and several uses of blasphemy.

While I acknowledge the presence of a really good film and terrific acting (which I can't help but think they made it because of all the awards it might win), it's not a movie I'd really recommend. - John DiBiase (reviewed: 2/2/02)

Sex/Nudity: Charles makes a sexual remark about a "cocktail." When John's classmates try to set him up with a pretty woman in a bar, he approaches her and bluntly asks what he has to do to just have sex with her, but she just smacks his face and leaves the bar. John mentions something about getting "laid." At a picnic, John tells Alicia "I want to have intercourse with you as soon as possible," to which she kisses him in response. The scene ends, however, before anything else happens. In a scene after they've been married, Alicia snuggles up to John and runs her hand under the sheets towards his crotch. He rolls over because the medication impairs him sexually. While a baby is in a bathtub, we see its genitals.

Alcohol/Drugs: There's some beer, wine, and champagne during the film.

Violence: A woman smacks John in the face; John smashes his head on a window and then he and Charlie toss his desk out the window; During a car chase there is some shooting before a car runs another off the road into a lake; John punches a man; Alicia slaps Bender's face; Alicia throws a glass at a bathroom mirror resulting in both shattering; John tries to stop a person from shooting another. Disclaimer: All reviews are based solely on the opinions of the reviewer. Most reviews are rated on how the reviewer enjoyed the film overall, not exclusively on content. However, if the content really affects the reviewer's opinion and experience of the film, it will definitely affect the reviewer's overall rating.