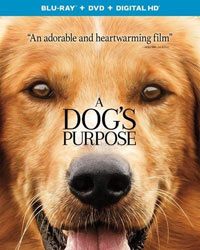 A dog looks to discover his purpose in life over the course of several lifetimes and owners. (from IMDB) 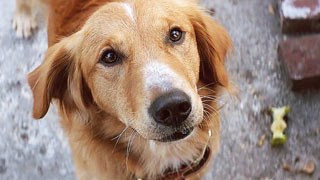 There are many dog-centric films that come to mind from over the past decades. From Homeward Bound, Milo & Otis, Beethoven and 101 Dalmations to even Marley & Me, Air Bud and All Dogs Go To Heaven, there's practically a genre of movies for dogs all their own. With a movie like A Dog's Purpose, which is based on a popular, fictional novel written by W. Bruce Cameron, it's ultimately a movie for dog owners and dog lovers almost exclusively, but there's a good chance that pet owners of any kind can appreciate the emotional journey that this story takes you on.

Now, a few things must be known going into this film. First of all, it's a work of fiction. Cameron actually made up the story on the fly while driving with his then-girlfriend (now-wife) to comfort her after her own dog passed away. She loved the story so much that she encouraged him to write it into a novel, and A Dog's Purpose was born. Secondly, the story involves the concept of reincarnation. The story opens with a dog that is a puppy that gets taken to the pound and then finds itself back to life as a dog named Bailey. A young boy named Ethan then takes in the dog, names him, and cares for him for many years. As time goes by, Bailey eventually passes away, but then finds himself reincarnated as a female dog named Ellie. Ellie is then reincarnated as a little male dog named Tino, and then finally reincarnated yet again as a dog named Buddy. Personally, I'm not too comfortable with the reincarnation aspect of the story, but after watching it and hearing Cameron and his wife talk about the origin of the story -- and the reason for writing it -- I understand why it's part of the story. Furthermore, it allows for a special emotional punch at the end that the story might not otherwise have.

The core story follows Ethan and Bailey from their own young ages through the dramatic pitfalls of life -- crushed dreams, lost love, broken family, loneliness -- through several decades until Bailey is able to reconnect with Ethan as a completely different dog when Ethan is well into his 60's. If you've ever owned a pet you've been close to (as I have), the thought of reconnecting with that furry friend is an emotional one for sure. But the main problem I found with A Dog's Purpose was in its narrative. Josh Gad, who's probably best known for voicing the snowman Olaf in Frozen, voices the dog(s) here. He doesn't sound quite as elated as Olaf, so it doesn't really sound like Olaf is narrating the film, but he probably doesn't embody the voice you'd expect your dog (or at least any of these dogs) to have. Also, the story is mostly told from the dog's perspective, but his narration is a little inconsistent. Also, the narrative can be distracting or corny at times. For example, when teenage Ethan is dealing with a domestic issue with his parents in the front yard of his family's home, Bailey's voice interjects little comments of what the dog might be thinking while something rather serious is happening around him (it expresses his confusion over the matters of humans--I get that--but still...). And when the dog might be in an animal-abusive situation, the narrative comments feel more manipulative than they probably should -- especially when, by the time the last incarnation of the dog is chained up in a yard for months (or even years?), we're already emotionally invested in the well-being of our canine hero. 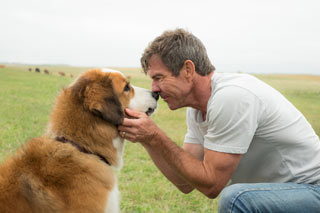 The film's introduction is slow-going, and the dog's trip through multiple lives doesn't feel necessary, but with such a broad scope as exploring the "purpose" of a dog's life, it helps illustrate various scenarios possible for the life of a dog, while also painting different portraits for the kinds of people from different walks of life who might own a dog. Does it make the destination for our dog, and his inevitable reunion with his most meaningful owner, more meaningful? It's tough to say. The fact that this same dog also embodies other dogs is a strange concept, but it excuses the 40 or 50-year gap between Ethan losing Bailey and finding him again later in life. But, still, the movie often feels overly simplified or even silly in its execution at times, but the tone is kept mostly lighter to enable family audiences to enjoy it. However, the decision to make Ethan's father a drunk, as well as somewhat abusive, is a strangely dark twist to the story.

The content for the film is surprisingly mild overall, but there are a few violent or somewhat intense moments. The aforementioned fact that Ethan's father is a drunk is definitely a surprisingly heavier aspect. There's also an act of vandalism that leads to a house fire and then a significant injury to a main character - all stuff that could frighten or disturb some younger viewers. Later in the film, a dog is shot (off screen) while trying to help someone and we see it die with blood under it and on its fur. It's a potentially weighty emotional moment, too. Then there's a brief segment where one of the dogs is shown chained up in someone's backyard, with seasons passing quickly to show that the dog never really moved from where it was kept. Finally, there's some sensuality, mainly between teenage Ethan and Hannah, where we see them making out in a car and kissing heavily a couple other times. Through Bailey's perspective, he often talks about there being specific "sweaty" smells (like hormones) when humans are nervous or getting romantically heated, and he describes humans kissing as looking for food in each other's mouths (but never really finding it) or licking each other's faces and "wrestling."

Dog enthusiasts and pet lovers alike will get the most out of Lasse Hallström's adaptation of A Dog's Purpose. It's pretty corny at times, but its heart is in the right place, and those who have fallen in love with canine companions a time or two will find themselves wiping away more than a few tears.


A Dog's Purpose is available on single-disc DVD or in a Blu-Ray/DVD combo pack with a bonus Digital HD copy. The Blu-Ray disc offers the film in a really vibrant HD presentation, as well as the following behind-the-scenes featurettes.

Deleted Scenes (9:24) - There are, surprisingly, 15 deleted scenes, but as you can guess by them totalling just 9 minutes, the scenes are just mostly snippets and tiny, little additional moments. For example, there's a small piece following the disastrous family dinner, date moments between Ethan and Hannah, other little tacked-on moments, etc. One longer scene shows Ethan, while injured, trying to get Bailey's ball out of a tree. Another shows Ellie finding an Alzheimer's patient who claims to know her as another dog. There are two alternate moments between Mya and her husband looking at a family photo album, and a scene where Buddy is searching for food in an alley and then finding the barber shop from a previous deleted scene when he was Bailey. What's also interesting about these deleted scenes is that, for all of them, the voice for the dog is NOT provided by Josh Gad!

Outtakes (2:11) - These are mostly scene mess-ups and shots of the dogs training and acting in front of a green screen (surprisingly). The best moment is when the dog playing Tino jumps into the bath tub that Mya is reclining in.

Lights, Camera, Woof! (8:46) - This is a behind-the-scenes featurette that is bizarrely told through the eyes of a female dog (so an actress narrates it as if it were a dog talking about the production. Yeah... it's odd). We see some good on-set footage and also hear from the director and the original book's author.

A Writer's Purpose (4:44) - This is the better of the two featurettes and it features the actors talking about book, as well as the author, W. Bruce Cameron, talking about how the book came to be. His wife tells the story of how Cameron came up with the story while the two were on a drive. She had just lost her dog and he invented the story to comfort her!

Sex/Nudity: Bailey sticks his nose up Hannah's dress to get her attention for Ethan; When Ethan is flirting with Hannah, Bailey says they have a sweaty smell about them; We see Ethan and Hannah making out in the car, to which Bailey says they do a lot of licking and wrestling, and that it always seems like Ethan is looking for food in Hannah's mouth but never finds any; Tino mentions getting to sleep with a dog he likes, but he literally means sleeping next to (but it sounds like it's a double meaning).

Vulgarity/Language: None. (A few of the "Oh my gosh!" sound a little like "G-d" though, but it seems like it's actually "gosh")

Alcohol/Drugs: We see Ethan's dad drinking in several scenes and drunk in a few of those scenes. Todd taunts Ethan about his dad being a drunk; While drunk, Ethan's dad shoves his wife (Ethan's mom), and she falls over; We see Buddy's first owner drinking out of beer bottles.

Blood/Gore: A dog is shot (off screen) and we see the dog lying down with blood splattered on its fur and pooling underneath the dog. We then see the dog close its eyes and pass away.

Violence: A woman smashes a car window to get a dog out of a hot car; Ethan says there's a rat under the table (to distract the adults). This causes Bailey to run around, knocking a woman over and causing some destruction. At one point, the dinner table collapses entirely; Bailey trips Todd who mocks Ethan for having the dog with him all the time; Ethan's dad is drunk and he pushes his mom over in the grass. Ethan defends her and the dad then pushes Ethan; Bailey digs up a dead, buried family cat and we briefly see it hanging out of his mouth (played for laughs); Ethan punches Todd in the face and he falls over; Todd drops a firecracker inside the front door of Ethan's house and it starts a fire that quickly engulfs the house. The family escapes, but Ethan falls and hurts his leg; Carlos fires his gun many times while practicing at a firing range; A kidnapper knocks a girl off a bridge into water. Ellie jumps in to save the girl. Carlos chases the guy with his gun drawn; Ellie attacks a man who's holding a gun, but the gun goes off. We watch Carlos cradle Ellie as she bleeds out and passes away; Tino accidentally knocks a guy's chair over; We see Mya watching a show that features a woman slapping another woman and then the two break out in a fight; A man throws a beer bottle on the ground. Disclaimer: All reviews are based solely on the opinions of the reviewer. Most reviews are rated on how the reviewer enjoyed the film overall, not exclusively on content. However, if the content really affects the reviewer's opinion and experience of the film, it will definitely affect the reviewer's overall rating.