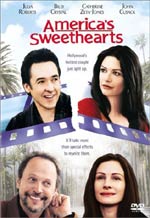 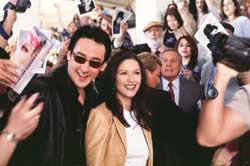 The most popular celebrity couple in Hollywood who served also as the most popular Hollywood on-screen pair has split when Eddie Thomas' wife Gwen Harrison has an affair. A year and a half later, as Eddie has spent half a year in a mental hospital recovering from the breakup, the couples' final film is nearing to be released. With the couple being split, publicity for Eddie and Gwen separately are bad, and people only want to see them together. The movie studio's publicist, Lee Phillips is then hired to put the couple back together for good publicity for the film. What follows is a mess of encounters between the two as well as with Gwen's boyfriend Hector.

This movie makes me livid and happy at the same time. Is that possible you ask? Apparently, cause that's how I feel. I loved this movie, but am upset with some of the film's content. At times this is a sweet screwball comedy that I can imagine starring Cary Grant and someone like Ginger Rogers, but the thing is, it would have been much better if that were the case. Not so much because they're one of a kind legendary acting icons, but because the movie would be most likely irresistibly funny while remaining a clean-as-whistle family movie. This is America's Sweethearts thorn in its side. Not only is swearing present (including 1 "f" word), but on occasion, the film tosses in an undesirable bedroom humor-related joke that makes you wonder why they had to ruin the moment with something unnecessary and inappropriate.

Sexual-related content is high mainly present in dialog form. In one scene, Eddie spots Gwen by a pool while peering over a fence. He slips while peeking and lands on a cactus. Some needles get stuck in his crotch and as he pulls them out he groans in pain. A security camera catches him doing this from behind and, without being blunt, security thinks he's doing something obscene as you see him quickly pulling out the needles (from behind). This is made reference to a couple times (including using unnecessary crude slang for this action). Also, Gwen is overheard saying that Hector's privates are really small, while later Hector repeatedly defends his privates repeatedly. Sadly, some of the most crude talk is included in the last scenes of the film, while the others randomly taint the movie throughout. Swearing includes numerous "s" words, the one "f" word, and many other 'colorful' phrases. This film quite easily could have been carefully edited into a PG form or a really mild PG-13. 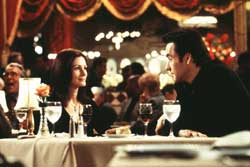 The reasons I still loved the movie but remain torn because of the annoying material that didn't need to be there, was mainly due to the irresistible cast and the wonderful chemistry between everyone. John Cusack is excellent as he plays the victim of his marriage gone bad. You really come to feel sorry for him for how things have turned out for him. Julia Roberts is in a similar boat as she plays Gwen's sister and assistant, Kiki, who is also a victim of Gwen's demands and selfishness. Billy Crystal is excellent in his publicist role, although those who saw him in My Giant will notice his character is virtually the same in this film as that one. Hank Azaria is hilarious as Gwen's Spanish boyfriend, and Catherine Zeta Jones plays the perfect bratty, snobby actress that Gwen is.

This movie floored me at how light-hearted it was. While it was serious at times and had a sad premise to how Eddie is treated, you never get much of a moment to let that effect your mood. Jokes fly in this film, blending beautifully with the romantic aspects to the film, keeping it above tear-jerking level. America's Sweethearts is the kind of romantic comedy they just don't make anymore. They're either just not romantic or they're all romance, a few chuckles, and pure depression. If it's a "romantic comedy" shouldn't it be funny? America's Sweethearts has its side-splitting moments and trails away from the typical "chick flick," making this a great date movie. But wait-- what about the content?

Overall, I liked this movie a lot-- it was a big surprise for me, but the random crude humor was a big disappointment. I really really want to love this movie, but I'm not comfortable with the sexual material. With that said, I'd like to grant the film a higher rating, but will still give it a good 3 stars. Please read all the content details carefully.

Sex/Nudity: We see Gwen in a revealing nurse's outfit for a brief moment and later see her momentarily in her bra; As Hector is bent over kissing Gwen who is seated, his butt is in Lee's face, and we see Gwen's foot caressing Hector's butt and Lee's embarrassed reaction. We see Gwen's doberman licking Lee's crotch. While Eddie peers over a fence at a woman by a pool, he slips and lands on a cactus. Some needles get stuck in his crotch and as he pulls them out, he groans in pain, making hotel security think he's doing something obscene when they spot him on camera doing this from behind. This is made reference to a couple times (including using unnecessary crude slang for this action). Two characters suddenly kiss and we then see them lying in bed the next morning clothed, suggesting they slept together, but nothing is seen. We see Gwen in a small outfit for a movie. In a scene she is singing while Hector does some pelvic thrusts and soon we see him sitting with her in front of him in a sensuous encounter but nothing really sexual or explicit (the scene angers Eddie). We hear Gwen discussing her relationship with Hector with some crude, inappropriate things said. Hector defends his manhood (after Gwen dissed his privates) by repeatedly commenting how "well-endowed" he is. Several other comments of innuendo are made during the film.

Alcohol/Drugs: Several people have drinks throughout the film. Eddie is drunk in one scene. Eddie takes a lot of unspecified herbs.

Blood/Gore: In a scene from one of their movies, Eddie has a small amount of fake blood on his head and the bandage around it.

Violence: A man drives a motorcycle through a restaurant window. Gwen's Doberman attacks a man and drag him away (meant to be humorous). A fight breaks out between two men. A man is hit in the head by a golf ball. In a dream, a man shoots another person repeatedly, but since it's meant to be funny, there is no blood or gore. Disclaimer: All reviews are based solely on the opinions of the reviewer. Most reviews are rated on how the reviewer enjoyed the film overall, not exclusively on content. However, if the content really affects the reviewer's opinion and experience of the film, it will definitely affect the reviewer's overall rating.