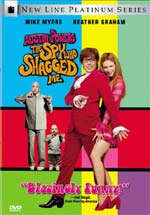 Austin Powers 2: The Spy Who Shagged Me

- for sexual innuendo and crude humor.

Austin returns to life as a swinger. Meanwhile Dr. Evil returns to earth in is Big Boy space ship and starts plotting how to destroy Austin. When he returns he finds a time machine already built for him and a clone of himself ready to help him... except he's 1/8th his size.

Like I heard one reviewer on TV say, the first half-hour or so was really funny with minor innuendo and vulgarity, till both picked up to greater degrees as the film progressed, thus ruining a great deal of the movie for me. From constant references to "shagging" and sex to Dr. Evil's space shipped being shaped like the male reproductive organ, this film is loaded with innuendo. In 2 scenes showing people spotting Dr. Evil's space ship in the sky, a long slew of rather painful "nicknames" for the male reproductive organs fly as people describe what it looks like. 2 scenes that truly could have been left out of the movie. 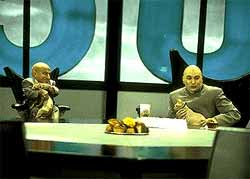 One plus would be the character Mini-Me, Dr. Evil's mini-clone. Although he bites and gives the middle finger to people 3 times during the film, his relationship with Dr. Evil always conjures up a ton of laughs. And Austin Powers is as funny as ever, especially when he's not being crude.

The language in the film is pretty bad. The worst is seen in the beginning when Scott Evil and Dr. Evil appear of the Jerry Springer show and they all get into a fight and you see people cursing, but the words are bleeped out. You clearly can read the "f" word on people's lips, including Dr. Evil. Also, one of the bad secret agents name is Fat B*stard. The "s" word is used several times, and as I mentioned earlier, a slew of male slang words are used to the point where you want to fast forward the movie (which unfortunately isn't possible in a theater).

The violence is high- lots of slap stick. And in one scene Robin Swallows is shot and stabbed and blown up repeatedly without blood and she still lives. Another guy is thrown into a lava pit and several other instances...

The movie was very very crude (Fat B's stool sample/coffee scene, Dr. Evil's space ship, as well as many others) and at times very very funny (The "zip it" skit, the Crybaby skit and the "Just the 2 of us" song spoof) But overall, the movie was entertaining, and by NO means a family of kids movie. Also not exactly a movie for Christians to see, some may be able to look past the crude humor and innuendo and laugh at the clean stuff (however rare it does show up), although I wouldn't recommend it. So due to all the above-mentioned stuff and the below-mentioned stuff and how it put a damper on the overall film, I have to give it 2 stars. If you have any questions about the movie... if you still want to see it, don't hesitate to contact me. - John DiBiase (reviewed: 6/14/99)

Sex/Nudity: Endless amounts of innuendo like with character names like "Felicity Shagwell," and "Ivana Humpalot." A lot of the conversations between Powers and women are suggestive and have double-meanings, although unseen (except for being in bed together), there are several sexual encounters: Dr. Evil with Frau; Austin with Vanessa, Ivana, and Shagwell; Shagwell with Fat B. During the opening sequence, Austin dances around nude and there is either writing cover his crotch or various objects around him (some, disgustingly suggesting what's really there, like various foods on a table, etc...); we see several shots of the cryogenically frozen Powers standing nude in a large glass case with only his hands covering his crotch; Shagwell flashes her bare chest at a guard to distract him (but we don't see it). Again, tons of innuendo as well.

Alcohol/Drugs: Various instances of alcohol used among the characters.

Blood/Gore: A severed, bloodless fembot hand; A woman is shot with a machine gun in the back, but there is no blood (just gun shot holes in the clothes), she's stabbed with no blood, and then later has small bloody scratches on her face; Tiny bloody scratches on a bandage on Number Two's hand; A little bit of blood on a man's leg that was just shot.

Violence: Lots of shooting, kicking, punching, fighting, biting... slap-stick humor mainly. Disclaimer: All reviews are based solely on the opinions of the reviewer. Most reviews are rated on how the reviewer enjoyed the film overall, not exclusively on content. However, if the content really affects the reviewer's opinion and experience of the film, it will definitely affect the reviewer's overall rating.