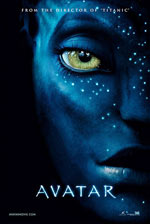 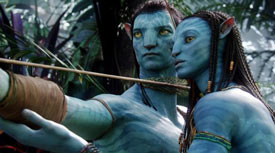 Avatar, a live action film with a new generation of special effects, takes us to a spectacular world beyond imagination, where a reluctant hero embarks on a journey of redemption and discovery as he leads an epic battle to save a civilization. James Cameron, the Oscar-winning director of Titanic, first conceived the film years ago, when the means to realize his vision did not yet exist. Now, after four years of actual production work, "Avatar" delivers a fully immersive cinematic experience of a new kind, where the revolutionary technology invented to make the film disappears into the emotion of the characters and the sweep of the story. (from MovieWeb.com)

Since James Cameron started work on his own new sci-fi project called Avatar a few years ago, hype has been a slow build, with it coming to a peak earlier in 2009 as the film geared up for a December release. While I wasn't sure what the hype was all about -- the ads never seemed all that awe-inspiring or interesting to me -- it was all still enough to stir my curiosity. Besides the fact that this is, to date, the most expensive film ever made, why is everyone so revved up about Avatar? 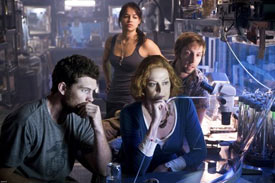 The early positive buzz was enough to get me in the theater opening night. And I'm a little surprised to admit that Avatar lived up to the hype. Following the recommendation of several other reviewers to see this one in 3D in the theaters, I decided that was the medium in which to experience the movie, and it certainly works successfully on this level. While 3D is really still a gimmick to get more people to see movies in the theater as opposed to just buying or renting the film once it's off the big screen, filmmakers are figuring out the best way to utilize this technology to enhance their feature films. Director James Cameron is no stranger to this technology either. In 2003, Cameron released the 3D IMAX documentary, Ghosts Of The Abyss, which took audiences under the water to the actual resting place of the sunken Titanic ocean liner. It seemed like a way for Cameron to just cash in on his 1997 blockbuster (and, to this date, the number one movie at the box office of all time), but it was an intriguing documentary and one that was especially fascinating in 3D. Avatar is such a unique film experience that the 3D really helps reel the audience into the alien world of Pandora that Cameron has dreamed up. The year is 2154 and a team of Americans have settled on the planet of Pandora in attempts to mine a precious metal that fetches quite a pretty penny back home. But the richest source of the material is located beneath the home base of the native aliens of Pandora. Here's where the tension is birthed from.

The story of Avatar takes place mostly within the world of the Na'vi natives, with all kinds of alien creatures, beasts, and plants. Cameron has spared no expense on the visuals either. Where most film effects get pretty dodgy when it tries to incorporate live action with CGI creations, most of the marriage between the two in Avatar were virtually seamless. Some of the most impressive visuals, however, were in the landscapes and backgrounds -- cliffs and rocks that looked truly tangible and water and grass that seemed real. When you have trouble being able to tell what's pure live action and what's entirely animated, you know they've accomplished their goal. But what's funny to realize is that more than half of the movie is a CGI animated film. While it goes beyond any kind of consideration for being a cartoon, you're still essentially watching large chunks of film that were generated entirely in a computer. But Cameron, who directed AND wrote the movie, takes his time developing the characters and the Na'vi culture to give Avatar a completed feel. The film's length threatens a three-hour running time, not to just include filler or wasted space, but to give us a chance to become familiar with a new culture and way of life. It's to a point where you've gotten to know the Na'vi so well, that you start to question which are the savages in this story - the humans or the aliens.

Cameron knows he's starting from scratch by inventing a new world and culture from the ground up, so by taking a human and thrusting him into the Na'vi society by way of an avatar (basically an outside body controlled by the mind of an individual who is connected to it some how -- think The Matrix or Surrogates), we're given the opportunity to learn about the Na'vi ways alongside of the main character who is also learning about them. Sam Worthington, seen earlier this year in Terminator Salvation, steps in as Jake Sully, a former Marine who lost the use of his legs and is thrust into the Pandora program without the proper training. Once he gets hooked into his avatar, separated from his team, and thrust into the Pandora habitat by himself, we get a first-hand tour of this new world. Enter Neytiri. Neytiri, who is played by Zoe Saldana (seen earlier this Summer in Star Trek), is a completely CGI character that never once shows Saldana as anything but her Na'vi creation. Neytiri becomes Sully's guide throughout the forests of Pandora, and that outsider forbidden romance slowly starts to build (it recalls the Jack and Rose relationship from Cameron's Titanic without the instant sexual attraction). Cameron spends so much time with both Sully and the Na'vi that when the story really requires us to care for these characters and their fates, we actually do. 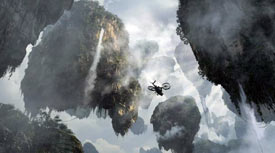 The acting in Avatar, coupled with a pretty solid script from Cameron's own hand, helps make the concept more acceptable. Where some movie makers in the genre might be tempted to go the campy route to offer up a few cheap laughs to keep the mood light, Cameron knows how to balance all the necessities for selling his concept. Sigourney Weaver was a strong part of the supporting cast, and it was a nice surprise to find she gets her own avatar in the film as well. Stephen Lang portrays trigger-happy Colonel Miles Quaritch and is really the biggest character in the movie who tends to teeter on the edge of going over the top with his performance. Still, Lang gets the job done and brings an intensity to the role.

As far as content goes, it's more or less what you might expect from Cameron. While Titanic seemed to be so unnecessarily loaded with colorful language, Avatar doesn't fair a whole lot better. Surprisingly, but thankfully, Cameron holds back on including any "f" words this time (even Titanic had quite the flippant and pointless use of it once), but the 7 uses of "g*dd*mn" felt out of place - along with an assortment of other profanities including almost ten uses of the "s" word, and several uses of the "a" word, "d*mn," "h*ll," "b*tch," and others. There's quite a bit of violent content - mostly in the film's last quarter - but few instances are all that graphic or bloody. The other caution flag to raise here, however, is the fact that the Na'vi are barely clothed throughout the movie. At times, we see lots of partial views of the Na'vi breasts but never the whole thing, as well as partial views of their bare butts. As one review I read put it, it was more done in a National Geographic style than anything meant to be sensual, but it will likely make some people uncomfortable. Much more awkward, however, is a brief love making scene between two Na'vi. We see them passionately kiss and embrace (with some pleasured sounds), with the two getting increasingly heated before the scene ends. Although they're still donning their minimal tribal loincloths and coverings during the sequence, it's a scene that could have just as easily been left out.

All in all, James Cameron's return to feature films is mostly a triumph with Avatar. Aside from the unnecessary use of language (which did hinder my enjoyment of the film a bit) and its long running time, one other sensitive topic is the Na'vi's religious beliefs. While the aliens' beliefs are very New Age and into environmental energy and such, the fact that it's imagined for a fictional alien race makes it feel less realistic or serious. Anyone who might feel a little threatened by such an aspect of the story should probably skip this one, while those who have no problems with things like "The Force" in Star Wars probably won't mind the Na'vi's beliefs either.

Avatar for the most part exceeded my expectations and delivered an imaginative sci-fi adventure that will draw the viewer in and present visuals for the eyes to feast on. Hopefully it won't be another dozen years before Cameron decides to make a fun feature film like this one.

Sex/Nudity: The Na'vi are barely clothed throughout the entire movie, wearing loin cloths that primarily cover their front, while their tails mostly cover their bare butts. A small set of beads usually (but barely) cover the female's bare breasts, while the occasional brief glimpses of some parts of the Na'vi's chests; Two Na'vi get intimate in a forest. They start kissing and the female wraps her legs around the male. We hear some pleasured sounds as they continue to make out, but the scene ends there. The next morning, we see them lying together on the ground (clothed) and we later hear a couple references to this encounter as the two "mating;" We see a nude woman's body wrapped in leaves and roots during a healing ceremony

Alcohol/Drugs: There is some brief smoking and some references to drinking

Blood/Gore: We see some blood on Jake's avatar's arm after being attacked; A Na'vi stabs Jake's avatar in the chest with a small spike or pin and tastes his blood to investigate him; Jake has a cut on his cheek; We see a wooden shard sticking out of a dying person's stomach (but the angle doesn't show the impact wound); A person touches their side and finds blood on their hand. We later see that person wrapped up with bloody bandages; Although neither bloody nor gory, we see many characters be impaled or stabbed with spears; We see a Na'vi get shot and briefly see the bloody dots as bullet holes on them as they fall back in slow motion; Some characters have varying amounts of blood on them during and after fights; We see two arrows enter a person and briefly see blood stains form around the arrows as they die.

Violence: Extreme -- Lots of fighting that involve Na'vi fighting creatures and later the military fight the natives with varying degrees of violence. Some creatures bite people and throw them through the air. We see spears and such impale various characters; A robot with a man driving it stabs a beast with a large knife repeatedly until it dies; Gunships fire on live natives and flying creatures; A group of people are attacked with tear gas and then a huge tree is struck by missiles which causes it to fall and crush people below; etc... Disclaimer: All reviews are based solely on the opinions of the reviewer. Most reviews are rated on how the reviewer enjoyed the film overall, not exclusively on content. However, if the content really affects the reviewer's opinion and experience of the film, it will definitely affect the reviewer's overall rating.