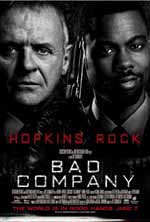 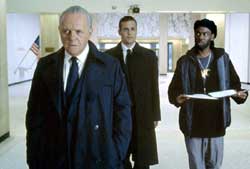 As the CIA works to secure a nuclear bomb from the black market, one of their operatives in the mission is murdered (Chris Rock). When they learn of the existence of his twin brother, they seek out Jake Hayes (Chris Rock) and hire him to replace his brother's serious position. This teams Jake up with an unlikely partner (Anthony Hopkins), throwing both of them into a tense situation as the success of the mission relies solely on Hayes' performance...

Bad Company is an interesting theatrical release. The film was released hot on the heels of The Sum of All Fears, two movies released back-to-back weeks with a nuclear bomb and terrorists involved in the central plot. Their release is not necessarily at a wise time while things are unsettled in the Middle East and September 11, 2001 far from forgotten. Another thing about Bad Company is the curious pairing of Rock and Hopkins. Two people I never thought I'd see work as partners in a film. The end result? Well, the chemistry isn't all there like that of Chris Tucker and Jackie Chan, but some of the interactions and just the idea of the two of them together is fun and interesting to watch. Rock's character seemed to have a very stand-up comic routine at times, which worked here and there, but not all the time. Would most wise-cracking street smart guys pick the CIA as a stand-up audience? I don't know about that...

Reviewers pummeled Bad Company. I kind of went into the film not expecting much. It was accused of ripping off a lot of other films to make up a lot of the scenes. Fortunately for me I probably haven't seen any of the films it borrowed from, but complaints were made by reviewers that it did it quite often and wasn't very original. Given the fact that the plot wasn't especially complicated or involved, it was just a setup for the pairing of Hopkins and Rock and for producer Jerry Bruckheimer to put together another fun non-cerebral action comedy. And just because the laughs weren't the kind you frequently find yourself belting out in full force, it was the kind of comedy you can chuckle or smile enough to be entertained. 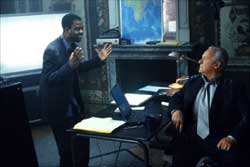 Content-wise, Bad Company is better than you'd expect, but still a solid PG-13 rated film. Language is strong with at least 1 "f" word and one or two possible mouthed ones, accompanied by plenty of other colorful phrases. There is some sensuality in the film, mostly while a girl mistakes Jake for his brother's cover identity. But the Rock's character deserves applause as he battles the temptation of a beautiful woman trying to lure to bed who she thinks was her boyfriend. Jake constantly thinks of his girlfriend back home in Jersey and rises above the temptation to stay true to his girl. A definitely refreshing turn of events that is hard to come by these days. Most characters, sadly to say, wouldn't care and would give in. Graphic violence is moderate here. We briefly see a couple photos of dead people with blood on their faces and such. We also see an intense sequence where a man threatens to cut the eyelids off of another man and gives that man a slightly bloody cut above their eye. Finally, we briefly see some blood beneath the shoe on the foot of a man who's just been shot there. There's a lot of gun fighting and shooting a la James Bond style that isn't very realistic and results in multiple deaths, but they are not bloody or graphic.

I wasn't impressed by Bad Company, but it wasn't a total loss. Moderately entertaining but nothing to write home about, the content doesn't help it either. You may just want to skip Bad Company or catch it on TV someday.

Sex/Nudity: Few verbal sexual comments are made, but not often. When Jake is assuming the roll of Michael Turner, he walks into his hotel room to find Michael's girlfriend taking a shower. We see her nude figure shape through the frosted glass, but no explicit details. She then comes out of the shower and Jake sees her completely naked (bu we just see a head and shoulders shot of her). She asks for a towel, and he hands her a washcloth. We then see her wrapped in a towel, and then see her in revealing lingerie. Later, at a resturant, she takes off her shoe and seductively runs her foot up his leg and into his crotch.

Alcohol/Drugs: Some people have drinks at various points during the film.

Blood/Gore: We see a photo of a bloody dead body; We very briefly see a black and white photo of a dead person, don't really see it long enough to make out what it is (but we see Jake's reaction to it). While two men fight, we see some blood on their faces (and some on them afterwards). As a man threatens to cut another man's eyelids off, we see a tiny bit of blood above his eyelid. A man is shot in the foot, and we briefly see a bloody hole in their black shoe and a little bit of blood on the floor under the shoe.

Violence: Lots of shooting (many resulting in death); a violent car chase; etc Disclaimer: All reviews are based solely on the opinions of the reviewer. Most reviews are rated on how the reviewer enjoyed the film overall, not exclusively on content. However, if the content really affects the reviewer's opinion and experience of the film, it will definitely affect the reviewer's overall rating.