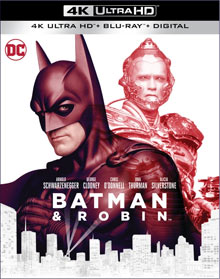 Batman and Robin try to keep their relationship together even as they must stop Mr. Freeze and Poison Ivy from freezing Gotham City. (from IMDb) 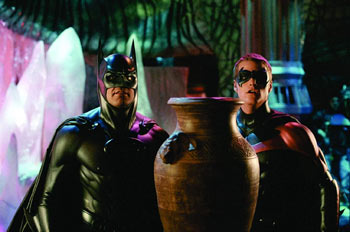 Batman 4K 2019 Release Intro
Before Twilight's Robert Pattinson (yup, that's officially a thing now), before Batfleck, and even before Christopher Nolan's stellar Christian Bale-led trilogy, there were four other Batman adventures that spawned from 1989 to 1997. To celebrate 85 years of the caped crusader, Warner Bros. is re-releasing all four films individually in a brand new 4K transfer with updated accompanying blu-ray discs. (The movies will also be releasing collectively in a set on September 17.)

I was just a kid when Michael Keaton's Batman debuted. I still remember seeing it on the big screen... and being terrified. It wasn't a kids movie by any stretch of the imagination, and that kind of set the darker tone for the films that would follow (even though the final in the series, Batman and Robin, was the most "kid-friendly" of the bunch, despite still being pretty creepy at times). Revisiting these films all these years later, it just shows me how far superhero movies have really come. After this year's gigantic event film, Avengers: Endgame, or even Warner's newest property, Shazam!, the quality is so much greater than what was produced in the late 80's and 90's (and this is coming from someone whose top 4 favorite movies of all time are out of the 80's). For these Batman reviews, I'm going to give an overview of them as a movie and also in this new transfer quality, while giving my usual content breakdown at the end. The 4K discs didn't have any special features on them beyond commentaries, but the regular Blu-Ray discs included in these sets do. Since the main feature of these releases are their new 4K transfers, I'm going to just focus on that aspect (and not the blu-ray bonus features). 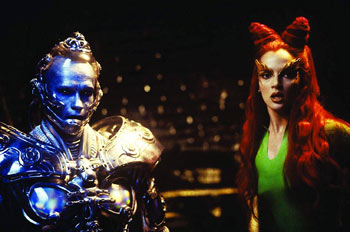 Batman and Robin Review
The final entry of the 2019 4K re-released Batman quadrilogy is by far one of the worst big Hollywood films I have ever seen. I remember seeing this movie in the theater and just marveling at how laughably (and painfully) bad this movie is. Batman and Robin saw Joel Schumacher at his absolute worst, taking everything that didn't work about his 1995 film Batman Forever and ratcheting it up to eleven. Kilmer was replaced by ER star George Clooney for the title role of Batman, and while Clooney probably isn't the single worst choice for playing someone like Bruce Wayne, he just proves to be a very odd and miscast Batman. (I disliked him as Batman so much that it took him playing Danny Ocean in 2001 for me to even remotely like him as an actor.) The cast of the film, on paper, is rather impressive, but with a stupid script, bad acting, insanely goofy sound effects, terrible wire work, cheesy set, prop and costume designs, and even nipple shapes on the rubber bat suits, Batman and Robin is perfectly terrible. (I mean, it even recycles the "vat of chemicals" bit from the first film to explain how Mr. Freeze was created, but the way it's done here is so laughably bad, it's actually insulting. Oh, and a scene where Robin is being attacked by vines underwater actually reverses the footage of him coming out of the water in order to extend the sequence, and then reuses it when he finally comes out. It's really sad.) It's the kind of movie that was born to be riffed on by the Mystery Science Theater 3000 crew (and has been via many of the original cast's side venture, Rifftrax). Seriously folks, it's dumbfounding just how awful this movie is. I did decide to check out some of Schumacher's commentary on the 4K disc, because I was curious what in the world he could say about this movie. In the few minutes I did listen, he admitted that the studio pushed for it to be more kid-friendly than he wanted it to be, and that it was meant to be more "toyetic," a phrase coined for the design of a movie to be able to easily produce and sell toys. (I don't think "kid-friendly" is, by nature, a bad thing--animated films have proved time and again to be great AND kid-friendly!) Whatever his excuses are, this movie successfully doomed the existing state of this franchise (but thankfully would eventually lead to Christian Bale's turn in the infinitely better Batman Begins in 2005).

The content of this film is, indeed, the most kid-friendly of all of them. I even was thinking, while watching this, how my 8-year-old could probably handle it. (However, because I love my son, I wouldn't want to show him such a downright terrible film.) There are a few creepy moments--like when the scientist boss of Uma Thurman's Poison Ivy goes a little nuts and shoves her into a table of beakers and chemicals (which would ultimately lead to her becoming Poison Ivy), and the creation of Bane is also potentially scary (although downright goofy). Otherwise, this movie is just too silly and ridiculous to be all that intense or terrifying. (And who doesn't think of Arnold Schwarzenegger as Turbo-Man when he delivers some truly cheesy one-liners?) The only thing this movie seemed to be ahead of its time with is the unusual amount of anti-male remarks some of the female characters make, especially Barbara/Batgirl. Clearly, no one making this movie knew their audience at all.

Of these four Batman films, Batman and Robin is by far the worst. If you want a good example of a really bad movie, this is it, friends. I can't think of a single thing that's redeemable about it--other than it inadvertently giving us Batman Begins. The 4K transfer is quite good--showing us every shiny sparkle on Arnie's skin paint--so it's really the best presentation of the film from a visual standpoint. Still, unless you're desperate for a new drink coaster that will make quite a conversation piece, I just wouldn't ever recommend Batman and Robin.

Sex/Nudity: We see close-ups of Batman and Robin suiting up and the camera focuses in briefly on their rubber-clad butts; Poison Ivy is seductive and sexy in a midriff top, and she passionately kisses the doctor who tried to kill her and he falls over dead (due to her poisonous lips); Poison Ivy does a somewhat sexy striptease out of a gorilla suit revealing a leotard and then she dances around. She tells Batman to "let junior go home" because she has "wild oats to sow." Then she suggests Robin instead because of his youth and that he could help "till" her "garden." She then says people can bid on her to get everything they see and "everything" they "dont;" Bruce passionately kisses Julie and he sees Ivy instead of her; Freeze talks about wanting to steal diamonds and Ivy suggestively says "Ill help you grab your rocks;" Talking about Poison Ivy, Batman and Robin suggestively say Great stems though. (Legs) Buds too (Chest) Yeah, those too.

Alcohol/Drugs: Freeze has a drink at one point.

Blood/Gore: Freeze's eyes get red and ghastly as he starts to thaw for a brief moment; Ivy kisses two guards who fall over dead. We see their faces with wide eyes and green veins in their faces; Liquid squirts out of Bane when they knock his mask tube out. He falls over and deflates; Freeze has red eyes and some red veins on his face.

Violence: Mr. Freeze ices some guards; Batman crashes through a glass window in the ceiling and kicks Freeze. Freeze punches and throws guards as Batman and Robin fight his hockey goons; Freeze kicks Batman and ices his hands to the inside of a rocket; We see the rocket blow up; Freeze ices Robin and Batman puts him in water and warms it up to free him; A scientist straps a skinny man with veins sticking out in his head to a table and injects him with venom. He screams as he inflates. Bane breaks his chains and throws off a nearby thug; A deranged scientist says Ivy has to die and he pushes her into a table that has poisons and chemicals on top of it. She sinks into the ground under her with snakes writhing around; We see black and white footage of Freeze falling into a vat of chemicals. He emerges with blue veins all over his skin; Poison Ivy is seductive and sexy in a midriff top, and she passionately kisses the doctor who tried to kill her and he falls over dead (due to her poisonous lips); Freeze ices a henchman; Freeze and his goons attack the crowd and Batman and Robin fight them. A couple of Freeze's thugs crash their cars into buildings. He freezes the Batmobile and Batman swings in and nabs him; Freeze slams two guards together and hits them. Freeze's eyes get red and ghastly as he starts to thaw; Bane gets roped with chains by a gang and he throws them. He and Ivy then smash up the place; Barbara gets involved in a motorcycle race and we see some motorcycle crashes; Barbara and Robin drive thru flames and wipe out. The two slide down a bridge go over the edge, but Robin catches her; Ivy kisses two guards who fall over dead. We see their faces with wide eyes and green veins in their faces; Guards try to stop Bane, but he just throws each one off as they attack him; Freeze gases guards and police; Bane fights Batman and Robin. He punches Robin in the head. Bane grabs Batman by the throat; Freeze kicks police down a flight of stairs; Ivy kicks the power hose out of a life support tank containing Freeze's sick wife; Bane destroys the Bat Signal; Freeze ices two scientists; Ivy throws Robin in the water and he struggles with vines attacking him. Bruce gets wrapped up and he tries to get free. Batgirl crashes in and fights Ivy. She kicks Ivy into a plant and she screams; Freeze ices the city of Gotham and cars crash into store fronts; There's a vehicle chase/fight with Freeze's goons; The large telescope crashes into a tower with scientists on it and they grab onto the telescope and hang on for dear life; Freeze and Batman fight; Liquid squirts out of Bane when they knock his mask tube out. He falls over and deflates; Batman knocks Freeze over the side of the telescope and he crashes onto the large diamonds below; Batman uses a heat ray to thaw out the city; The whole telescope falls off the side of the building and Batman saves himself and the scientists; Freeze has red eyes and red veins on his face. Disclaimer: All reviews are based solely on the opinions of the reviewer. Most reviews are rated on how the reviewer enjoyed the film overall, not exclusively on content. However, if the content really affects the reviewer's opinion and experience of the film, it will definitely affect the reviewer's overall rating.