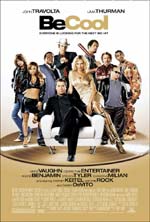 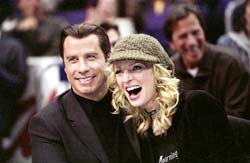 John Travolta is back as Chili Palmer in Be Cool, a sequel to the 1995 comedy Get Shorty. This time, Chili becomes a different kind of hit man  he abandons the movie industry to bring his wiseguy skills and negotiation tactics to the music business. When a friend is offed while theyre at lunch, Chili takes the opportunity to visit the guys wife, Edie (Thurman), and pitch himself as her new business partner at an independent record label. With a promising young pop-star-in-training as his protégé (Milian), Chili has to juggle her faux-urban manager (Vaughn), his gay, wannabe-actor bodyguard (The Rock), Russian mobsters, and an eloquent gangsta music producer (Cedric) to save the label and land a hit  and keep from getting popped himself... (from BeCoolMovie.com)

It's interesting to see the sequel to a movie you've never seen. I let the 1995 Barry Sonnenfield-directed comedy Get Shorty pass me by due to its R-rating and nearly 100 uses of the "f" word. Not my idea of entertainment. But, surprisingly, Be Cool is the 2005 sequel to the original, directed by F. Gary Gray (The Italian Job) and this time around has been made for a PG-13 rating. An ensemble cast carries this film, and at the same time dares to push the alotted content for a PG-13 rating.

First off, the story takes its lead, Chili Palmer, played by John Travolta, out of the movie business that Get Shorty brought him into, and brings him to the music business. Colorful characters and tongue-in-cheek writing make this a fun film to watch, but constant profanity and some brutal violence make this one hard picture to get through. 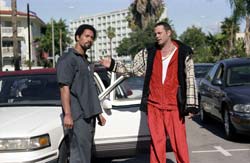 Vince Vaughn steals the show with his portrayal of the wanna-be Urban manager Raji as he ghetto-talks his way in and out of trouble and dresses about as flamboyantly as Snoop Dogg. Just hearing Vaughn utter lines like "Stop hatin', start participatin'!" to a bold-faced character like The Rock is just priceless. The Rock equally steals the show as the wanna-be actor bodyguard to Raji. But as crude as the language often is, characters are constantly bashing on his character for being gay, quickly spout derogatory insults as "f*g" and "f*ggot." And in the same offensive turn, the word "n*gger" is used many times in some songs and then used as an insult from a Russian to an African American. Be Cool is all about stereotypes, but never takes itself seriously for a second. The whole movie winks at the audience from start to finish (with the opening scene involving Chili complaining about movie sequels and MPAA ratings allowing only 1 "f" word in a PG-13 -- to which he uses the word to denounce it). But it really is a shame the film isn't more sensitive to offensive material or stereotypes. While I realize their attempt may be "all in good fun," toes are inevitably stepped on. The film is entertaining from a story standpoint, but ultimately taints its end result with a movie that has no business being seen by younger audiences and thus probably deserves an R rating instead.

With that said, I'll elaborate further on content. While the hundred "f" words are non existant in the second Palmer outing, almost 40 "s" words, almost 30 "a" words, and almost a dozen "g*dd*mn's" take their place. While some may argue that this is "realistic" language for the time, the place, and the industry, it just doesn't add to the entertainment value of the film. But hey, maybe that's just me? As far as violence goes, we see a character hit with a baseball bat and, upon falling to the ground, is beaten to death outside of the camera shot. Later, we see a man shot to death for insulting another man and then see a glimpse of the body as it is shot again. Other lethal and nonlethal violence is also present.

Did I mention the soundtrack was a waste? If it wasn't Black Eyed Peas' distasteful and ultimately lame "Sexy" alone pushing the boundaries of the rating, there were other songs laden with "s" words, "b*tch," and "n*gger" scattered throughout the movie. One of the only noteworthy songs was by Sixpence None the Richer, but even then it was the overplayed "Kiss Me" which was used almost exactly the same way it was used in How To Lose A Guy In 10 Days. John Powell, who scored Gray's Italian Job did whatever little composing that was used in the film, and even music from that film was lifted and reused here.

Be Cool could have been a great flick to return to in the future when in need of a good laugh, but is ultimately a vulgar cinematic display. I'd only suggest checking it out if you ever can find it on TV on a station that still edits their movies (and good luck finding one). If toned down drastically, I would have rated the film much higher, but as such I can only rate it a sorry two stars out of five.

Sex/Nudity: A few women dancing in a bar are barely clad and dancing around in a sexy manner; Many women throughout the film wear revealing clothing of different kinds; Raji makes degrading sexual comments to Linda; Edie is seen lying on her back sunbathing topless, and we see her in a tiny bikini that shows off quite a bit when she sits up and puts her top back on; We see Tommy in a flashback as a woman busts out of his office, fixing her top as he is zipping up his pants (suggesting he's fooling around with another woman while being married to Edie); We hear "Sexy" by the Black Eyed Peas while Chili and Edie dance to it in a club. We see them get really close and slightly grind as the song, entirely about sex, is played in the background; We see what looks like a small album cover poster in Raji's office that has a painting of a bare-breasted woman on it; We see Linda on stage with Aerosmith in a skimpy outfit; Chili and Edie passionately kiss, and in the next scene, we see them asleep in bed together, clothed (suggesting they probably slept together). We see some scantily clad dancers in a strip club while a song called "Me So Horny" is playing in the background.

Alcohol/Drugs: We see people having drinks casually throughout the film. When Chili first goes to see Edie, it's obvious she's been drinking (bottles everywhere) and it appears she's intoxicated or at least tipsy.

Blood/Gore: A man is gunned down and we see a slightly bloody bullet hole in his jacket; A gagged and tied-up program director has scrapes on his face; A member of the Russian mafia has a black eye. Later we see him with another; We see Raji has a bloody lip and abrasions on his face from being roughed up; We see a bullet hole in a dead man's shirt that's slightly bloody.

Violence: A car pulls up to a cafe and guns down a man (killing him) and shoots up the building and a car; Some punches are thrown; We see a bound and gagged program director that Sin smacks around with a spatula; We see a dead man in Chili's kitchen who appears to have been dead for awhile. We see a bullet hole in his jacket when he falls over; A man is choking and another man proceeds to beat him up with a baseball bat till he's dead (out of camera range); A man shoots another man and then we see him shoot him again; Dabu accidentally shoots someone; Raji is hung off the side of a building, threatened to be dropped; other random punching and nonlethal violence is seen, including a person is caught on fire and seen running around on a music video set (played for laughs). Disclaimer: All reviews are based solely on the opinions of the reviewer. Most reviews are rated on how the reviewer enjoyed the film overall, not exclusively on content. However, if the content really affects the reviewer's opinion and experience of the film, it will definitely affect the reviewer's overall rating.