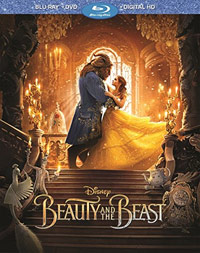 - for some action violence, peril and frightening images.

An adaptation of the fairy tale about a monstrous-looking prince and a young woman who fall in love. (from IMDB) 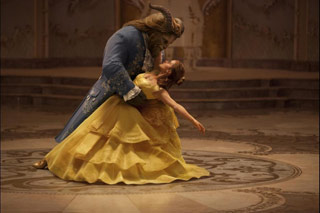 In the age of remakes and big, blockbuster sequels, we now have live action remakes of animated films. A live action version of Cinderella was recently a big hit, so it's no real surprise that one of Disney's most successful animated films, Beauty and the Beast, would get the live action treatment. Director Bill Condon (who is most famous for The Twilight Saga: Breaking Dawn and Dreamgirls) takes on the task of bringing this story to life, and he does a relatively good job in the process. The film mixes real, tangible sets with enhanced effects well -- even if those effects don't always work.

I was pretty young when the original animated Beauty and the Beast released. In fact, it served as an entry point into my love for music. I used to play the cassette tape of the soundtrack over and over. So for Beauty and the Beast to return, I'm glad they kept many of the key songs while adding some new ones. They did a nice job on recreating the originals as well as creating new songs to fit into the mix. It was weird seeing characters like Lumiere and Cogsworth portrayed as far less animated or cartoony, but they still turned out pretty great -- and were performed by two fantastic actors, Ewan McGregor and Ian McKellen, respectively. Emma Watson would certainly not be my first choice for Belle, but she does a fine enough job. I feel like there is probably a better choice out there, but I did warm up to her as the movie progressed. Dan Stevens is pretty good as The Beast. Once he's able to stop just growling and yelling at everyone and start to build his character more, their scenes together end up working well. My biggest problem with his character, though, was the CG animation. It just didn't look all that great most of the time. I definitely prefer the original animated version to this live action one. Worse yet is that his entire body was performed with motion capture, which was all that more obvious when you see Beast standing next to Belle and his clothes don't move in a natural fashion, but hers do. Luke Evans actually does a fine job as Gaston. Again, I wouldn't think of picking him either, but he seemed perfect to bring that character to life on the big screen.

To make the film work as a feature, the run time was extended to over two hours, so some backstory and additional scenes were added. All of these actually worked, too, and I especially enjoyed one where Belle revisits her childhood home. It was a little bit like a page taken from A Christmas Carol, but it served the story. Kevin Kline was also wonderful as her father, Maurice. I enjoyed seeing his character given more substantial screen time, too. 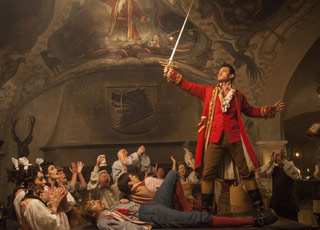 Now, the content is definitely PG-rated, but maybe not as rough as the original in some respects. Beast still gets attacked by wolves, and wounded in the process, but his wounds are toned down dramatically to just appear mostly as red spots on his fur. Also, the violent finale is changed up so that Beast is shot instead of stabbed. This is still intense in the sense that it's emotional, but it isn't graphic. But here's where the content takes more of a controversial turn. A lot of buzz preceded the film about how Gaston's righthand stooge, LeFou, was now presented as gay. I then heard mixed things about it not being obvious, and then heard it was pretty blatant. I suppose that's up to the viewer on its severity, but I found it to be out of place and completely unnecessary for a story like this. And it isn't very subtle either, because Condon made sure to throw in yet another gay character to later drive home LeFou's romantic preferences by the film's finale. There are several scenes where Gaston is talking about wooing Belle and wanting Belle, which make room for LeFou to make comments about trying to pursue Gaston for himself. And during the song about how big and grand Gaston is, LeFou joins in to sing (very flamboyantly I might add) in a passionate way. Finally, there's a scene where the dresser, Madame Garderobe, is attacking the town mob that has stormed the castle, and she takes three men and clothes them in womens' dresses and makeup. Two of the men run off screaming, while one looks back at her with a blissfully elated grin before walking off. In the finale, LeFou is seen dancing with a woman, but when she spins away, the aforementioned man (who is now dressed as a man again) steps in to dance with LeFou. By the time this happens, it really makes the homosexual undertones feel far more like overtones. I suppose this shouldn't be a surprise from a director who's done films like Kinsey or Gods and Monsters, but for a family film, it just feels perverse. Sadly, we're also living in a time where media is constantly forcing this stuff into our everyday entertainment whether viewers want it or not, in a continued effort to normalize it. Does it completely ruin this new take on Beauty and the Beast? No, I don't feel that it does, but it feels like there's more of an agenda here than just an attempt at being funny, and that's what makes it more distasteful.

Controversy and nitpicks aside, I found the live action revisit to the world of Beauty and the Beast to be pretty enjoyable. Since its release, it's broken into the Top 10 Domestic Box Office sales of all time, as well as earning the title of most profitable PG rated film in the U.S. of all time (which does not take into account inflation or the higher cost of IMAX and 3D ticket prices). Does it deserve such an accolade, I personally don't think so, but it is a well-made musical and fairytale. I'm now curious to see how Disney will be handling their other animated films as live action properties that are currently in the works.

Enchanted Table Read (13:31) - A table read is a common practice for film and show productions where the actors sit around a table or in a circle and read their lines through. This featurette talks about how special and unusual this table read was for Beauty and the Beast, as it featured dancing and singing during the read! We get to see footage from these moments, as well as comparisons to what the final version looked like.

A Beauty of a Tale (27:08) - This featurette is a behind the scenes look at the film's casting, altering characters from the animated film for the live action one, the original songs and adding new songs.

Deleted Scenes (6:23) - There's a Play All option with a brief intro from the directory. The first scene, called "Gaston Courts Belle" is just an extended moment. In the short scene, LeFou accidentally shoots a cow. Next is a short moment where Belle gives bread and jam to Agatha. "Storming the Ice Gates" just shows the mob crashing the castle gates. "Lumiere Torches LeFou" shows Lumiere attacking LeFou when he threatens other characters in the castle (There are unfinished effects here). Now, for "Monsieur Toilette," we meet a new character - a servant of the castle who got turned into a toilet. LeFou runs into the bathroom and meets this toilet as it comes alive. He actually says "Oh shhh..." and then is shown running out screaming, completely wet. "Cogsworth Rescues Lumiere" is a short scene, as well as another where women are shown getting attacked in the kitchen. Finally, LeFou meets Monsieur Toilette after he's been changed back into a human. He looks like he's in shock and then says he's going to go brush his teeth. Honestly, all of these scenes are pretty much throwaway scenes, and I'm glad they cut a lot of these much goofier moments out from the final film.

The Women Behind Beauty and the Beast - In this featurette, Emma Watson helps highlight the women who helped bring the production to fruition.

Fans of the music in the film will appreciate the last batch of features that include: From Song to Screen: Making the Musical Sequences (which goes behind the scenes of making the film's songs); Extended Song: Days in the Sun With Introduction by Bill Condon (which adds to the song that delves into The Beast's youth); Making a Moment to Win Celine Dion (which focuses on her end title song, "How Does a Moment Last Forever"); the "Beauty and the Beast" music video by Ariana Grande and John Legend and a special Making the Music Video "Beauty and the Beast" featurette; and finally, a Disney Song Selection, which allows you to jump right to the song portions of the film.

Sex/Nudity: LeFou flirts with Gston. When gaston mentions finding a girl playing hard to get alluring, LeFou acts as though Gaston is now a challenge for him; During a song number, LeFou says "nobody BITES like Gaston!" and pulls up his shirt to reveal bite marks on his belly; After the mob that has stormed the castle, Madame Garderobe takes three men who come at her and clothes them in womens' dresses and makeup. Two of the men run off screaming, while one looks back at her with a blissfully elated grin before walking off; Someone tells LeFou that he's too good for Gaston; In the finale, LeFou is seen dancing with a woman, but when she spins away, the aforementioned man (who is now dressed as a man again) steps in to dance with LeFou.

Blood/Gore: During a song number, LeFou says "nobody BITES like Gaston!" and pulls up his shirt to reveal bite marks on his belly; We see some bloody marks on Beast's legs after the wolves attack him; We see bloody scratches on Beast's back through the fur as Belle tends to his wounds; A dying woman is briefly seen with some scabs or sores on her face; We see dark spots on Beast's clothes where he was shot

Violence: As the prince turns into the Beast, we see claws slash his painted portrait on the wall; Wolves chase after Maurice. He gets cornered, but is rescued by his horse; Beast captures and corners Maurice; Wolves attack Belle. Beast intervenes and they attack and bite him. He throws them around, hurting them; Gaston punches Maurice in the face. We then see Maurice tied him and sitting under a tree; We see a woman lying in bed, dying of the plague; The townspeople form a mob who sing and chant about killing The Beast. The storm the castle and the furniture fight back, with punching and kicking as well as some slapstick violence; Gaston shoots Beast in the back and he falls; Gaston beats and kicks Beast. Beast then grabs Gaston by the throat and holds him in the air over the edge, but doesn't drop him; Gaston shoots Beast two more times; A bridge gives away under Gaston's feet and he falls to his death. Disclaimer: All reviews are based solely on the opinions of the reviewer. Most reviews are rated on how the reviewer enjoyed the film overall, not exclusively on content. However, if the content really affects the reviewer's opinion and experience of the film, it will definitely affect the reviewer's overall rating.