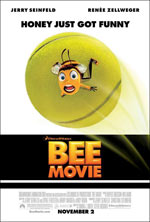 - for mild suggestive humor, and a brief depiction of smoking. 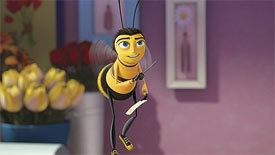 Bee Movie is a comedy that will change everything you think you know about bees. Having just graduated from college, a bee by the name of Barry B. Benson (Jerry Seinfeld) finds himself disillusioned with the prospect of having only one career choice - honey. As he ventures outside of the hive for the first time, he breaks one of the cardinal rules of the bee world and talks to a human, a New York City florist named Vanessa (Renée Zellweger). He is shocked to discover that the humans have been stealing and eating the bees' honey for centuries, and ultimately realizes that his true calling in life is to set the world right by suing the human race for stealing their precious honey. (from MovieWeb.com)

Upon the completion of the smash hit television sitcom Seinfeld nine years ago, comedian Jerry Seinfeld decided to hang up his stand-up career soon after as well and lay low for awhile. Seinfeld had successfully settled down, married, and started a family, before deciding to reignite his stand-up career and begin penning his first feature family film, the animated production Bee Movie. It's exciting to think of the humor and wit of Jerry Seinfeld being channeled into a Dreamworks Animation project, and since learning of its process over three years ago, it's a movie I've been looking forward to.

Admittedly, as a fan of Seinfeld's shtick, Bee Movie is a bit weak at times but is overall a fun cinematic outing. The animation style is a bit different from your usual affair. A lot of the detail is concentrated on the little insects and their world, with some of the humans' animation ending up a little stiff and rigid, but it works out given the fact that this is all about the bees, and a lot of thought has been put into fleshing these little guys out. In fact, the bees are portrayed in such a way that you're likely to think about them a lot more differently now - even to the point of liking them if you never had before. But the animation as a whole is on par with other Dreamworks projects like Madagascar or Shrek, and is just as uniquely stylized. So even if the humor isn't hitting the mark as often as you'd like, there are plenty of beautiful visuals to keep the viewer's interest. 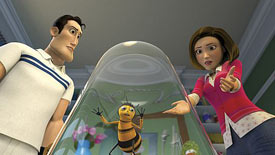 And the kind of occasionally tasteless humor is right in line with that of Shrek or even Fox Animation Studios' Ice Age films. While there isn't really any language (aside from a play on words as Barry lists bee versions of celebrities and says "Bee Buddha, Bee Ghandi, and even a Bee-Jesus!"), there are a few suggestive references. These potentially off-color moments include the bees all being "cousins" when it comes to dating each other, a queen bee that was really a male bee disguised as a queen (for a joke about a "drag queen"), and the biggest surprise was in a courtroom scene where the lawyer tries to imply that Barry's relationship with Vanessa - a human - is more than just a friendship, even going as far as calling him a "bed bug." It was a bit of an awkward moment for a family cartoon, but it's also likely that this would buzz right over kids' heads. Aside from a couple instances of borderline humor, there are some surprisingly violent moments as well. When Barry starts talking to Vanessa (he's a bee, she's a human), she stabs her hand with a fork quite hard to make sure she's not dreaming. Later, when Barry fantasizes about hanging out with Vanessa (they share a picnic and go flying together), she suddenly accidentally crashes her plane into the side of a mountain and explodes in a ball of fire. Its shock value is likely to elicit some laughs, but it seemed edgy for a family comedy.

Although there is a peppering of violence and a few off-color jokes, the majority of Bee Movie is a fun animated comedy. Seinfeld's signature observational comedy works well inside the world of bees, but it seems he holds back from the potential of cracking one-liners all throughout the movie. One of the best Seinfeld moments comes in his confrontation with "Bee Larry King" and he starts riffing about there being a real-life human Larry King just like him. It's the kind of humor you'd find in the comedian's popular TV show or even in his stand-up routine, and it made for one of the funniest scenes in the film. Of course, his signature touches are felt all across Bee Movie - particularly each time a real life observation is made about insect life. In addition to Jerry being the ringleader, Matthew Broderick is a great choice for the best friend of Seinfeld's Barry B. Benson. Patrick Warburton, also a Seinfeld alumnus, is fun as a sort of villain to Barry, being a bee-hating jock boyfriend of Vanessa's. Renee Zellweger adds a nice sweetness to Vanessa, while other recognizable voices from Michael Richards (Kramer on Seinfeld) to Rip Torn, to John Goodman and Chris Rock all make notable appearances (and it's fun to try to pick out who's voicing whom if you know who to look for ahead of time).

Bee Movie may live up just a slight bit too closely to its bold play-on-words title, but in the end remains to be a fun animated feature. The film's finest moments are clearly not when Barry is taking on the human race to fight the stealing of their honey (although an interesting little twist happens because of this), but the look into the intriguing hive-life of honey bees as well as Barry's fish-out-of-water experiences in the human world of New York City are all ingredients for making one sweet little film. It may not be Shrek 2 or Over The Hedge, but Bee Movie is a highlight of the 2007 animated choices and a welcomed break from a Fall season riddled with unwatchable horror films and adult Oscar contenders.

Sex/Nudity: Adam points out a "hot" girl to Barry, who then reminds him they're all cousins; When Barry suggests to Adam that girls like the jock bees, Adam asks about them being cousins and he insists "distant;" A joke is made about bugs being attracted to spiders because of all the legs; Montgomery tries to anger the bees and suggests to Barry that he and Vanessa have an intimate relationship by suggesting he's a "bed bug;" Inside a honey farm's fake hive, the bees tell Barry their queen bee was moved to where they currently live so they followed. They point to a photo of a bee but it has facial hair. Barry exclaims that it's a man in woman's clothing and not a queen - but a "drag queen."

Alcohol/Drugs: We see Ken holding a wine/champagne bottle, who then gets some in his eye accidentally

Blood/Gore: We see an abrasion on Ken's head after he smacks it; Vanessa stabs her hand with a fork to see if she's dreaming or not (and we briefly see the mark on her hand); Mooseblood talks about sucking blood (as a mosquito)

Violence: Lots of comedic violence. Vanessa stabs her hand with a fork to see if she's dreaming; People smack and swat things to try to kill bees; We see dead bugs on a windshield; Vanessa smacks a man for smacking Barry; Barry has a dream/fantasy about him and Vanessa having a picnic together. She kills a bug, which Barry gasps about and then they pause before both laughing. We then see Vanessa flying a plane and spelling out a heart in the sky, before the plane crashes into a mountain and bursts into flames and then crashes to the ground (snapping Barry out of the fantasy); Montgomery angers Adam who in turn stings him, etc... Disclaimer: All reviews are based solely on the opinions of the reviewer. Most reviews are rated on how the reviewer enjoyed the film overall, not exclusively on content. However, if the content really affects the reviewer's opinion and experience of the film, it will definitely affect the reviewer's overall rating.