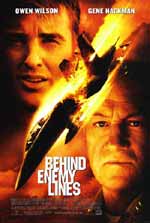 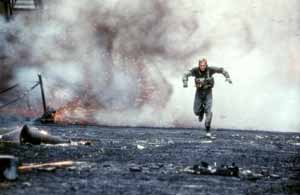 Chris Burnett is a Navy pilot of seven years who is sent on a Holiday recon mission with his pilot to take some photographs. When Burnett convinces his pilot to go off course, they find an interesting settlement and take photos of the mysterious area. When the troops there discover they're being spied upon, Burnett's plane is shot down but he survives. What follows is a fight for survival as the militant group hunts Burnett all across areas of Bosnia. Will he be rescued or caught?

The thing about action movies these days is most of the time it's all about the action and not at all about the story or dialog or character development. Effects replace the essentials. Filmmakers have come to expect moviegoers to care solely about the cool camera angles, explosions, and computer animation than the deeper more meaningful material. 2001's Behind Enemy Lines tries to find common ground. The problem with the film is they've taken a war drama and transformed it into a Mission:Impossible 2-ish ordeal. Instead of the emotions and reality coming into play, we have more of an imaginative truth-stretching adrenaline rush with plenty of eye candy.

Is this bad? Only if you're expecting Saving Private Ryan. If you expect a plot that is just enough to get the movie by and a worthy action hero performance from usually comedy man Owen Wilson, than you'll be happy with Behind Enemy Lines. If you're in the mood for a good ride with plenty of effects and visuals to please the eye, you'll be more than content with this film. Don't expect 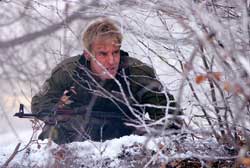 I didn't expect anything truly amazing about the film, so I was naturally pleased and content with the film's nail-biting suspense moments and intriguing visuals. How was the content? Violent. And unfortunately the language left something to be desired. Figures the frustration and angst of characters in the film lead to frequent uses of the "s" word, the irritating blasphemous "God-d*mn", and one usage of that ridiculous "f" word. As far as violence is concerned, we see, from a distance, a brief glimpse of a man executed by being shot in the head. Some other shots of wounded victims of war and slightly bloody dead bodies were also shown. No sex and nudity was present.

Overall, I enjoyed the film, although was thoroughly irritated by the swearing. I can't outwardly recommend this film due to that and its violence. The film is probably what you just wouldn't expect, so make sure you're in the mood for this type of flick. As always, please read all the content details carefully.

Blood/Gore: Burnett has a little blood on his face after ejecting from the plane. Stackhouse has a few bloody scrapes on his face and some blood on his face where his leg is broken. Although not excessively graphic, we briefly see from a distance a man shot in the head as he is executed. We briefly see a large group of dead bodies covered in mud in a ditch. We see various bodies on the ground as aftermath of war. A few of them are bloody with one having some blood next to it and another having what looked like blood on his forehead from being shot (blurry, from a distance). We briefly/partially see a dead person's face has a lot of blood on it. As a form of aggression, a man shoots a dead resulting in a little blood landing on others around. We see a person shot several times with possibly a little bit of blood. A dead person has some blood on the ground around their head.