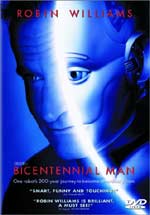 A family purchases a state-of-the-art robot named Andrew (Robin Williams) to do housework. When the family realizes that the robot is doing creative, out of the ordinary things, they encourage it in its work. As the years pass, Andrew acquires more human personality traits and decides to seek out to become more human. He then takes a multiple year journey to find others like him. Soon, his mission turns into a 200 year adventure filled with hardships and love as he tries to be accepted as a human being.

The more I ponder this film, the more I realize I have a love/hate relationship with it. It's a great theatrical piece, but tainted in more ways than one. The morals are a bit messed up.

With a good plot, good acting job, and good characters, Bicentennial Man is entertaining to say the least. But I once again must get atop my Hollywood soap box and complain about certain aspects about this movie. 1st off, the language. This is a PG-rated movie and in one scene, Rupert, the character who gives Andrew human "upgrades," teaches Andrew to say the "s" word as opposed to other harmless words. The word is repeated several times and then Andrew later uses it in the film. It's just stupid, because it encourages swearing. And of course kids who see the movie will probably think it's funny and without knowing better, repeat the word.

God is pretty much left out of the equation in the movie, with the exception of the occasional appearances of a church (mainly for weddings, so it's no big deal). But the mere fact that the robot wants to be human, and other humans try to help him is like playing God, which one cannot do. It's a stupid scenario and it makes me mad how no one in the movie questioned that. The nitty gritty is that he will forever remain a robot because he has no God-given soul. A point which the movie overlooked and implied a couple times that Andrew indeed had a soul which is baloney to say the least.

Also, in Andrew's quest for "humandom" (I can make up my own words :) ), he gets male organs and it's implied in many ways that he has premarital sex with a female human being (unfortunately, you have to specify gender these days). For this to be PG, it's assumed that it is a movie you can take your kids to, but, unfortunately, Bicentennial Man is not that kind of movie. From language to sex talk to implied sexual relations, this is a movie to leave the kids home for. (Small minor note: there is a fat ugly spider in it for those of you spider-haters like me. It's not as bad as a tarantula, but they do briefly show Andrew finding the ugly pest and take it outside to set it free on a flower bed. If he was really smart, he should have killed it...)

The redeeming qualities of the film are the emphasis on family, the special effects (for the futuristic scenes that remind me of Back to the Future II), and the characters. The film does have its funny moments. And for a Christian, it does make you think, but the above faults still ring true. The 2.5 star rating is mainly given for the film's production, and it would have warranted a higher rating if it weren't for the stupid wordly flaws. If you have any questions or comments about the film before you see it, feel free to contact me.

Sex/Nudity: Andrew tells a semi-crude joke to the family; Several instances of sex talk (birds and the bees type stuff); and in once scene, Andrew describes the wonder of sex to Rupert. In one scene, we see Andrew in bed with Portia, after sex (but no nudity is shown). There's implications of premarital sex years later but nothing is seen.

Alcohol/Drugs: Several characters drink wine and beer throughout the film.

Blood/Gore: Andrew mistakenly severs his mechanical thumb off, but there are no bloody or gory results (and he doesn't feel it). Also, we see several shots of Andrew's decapitated head before being placed on his new body (not bad). We also see Andrew during surgery with mechanical-like organs, and we also see these organs outside the body, too.

Violence: Andrew jumps out a window and is damaged; Andrew goes after another robot with drill (off screen) Disclaimer: All reviews are based solely on the opinions of the reviewer. Most reviews are rated on how the reviewer enjoyed the film overall, not exclusively on content. However, if the content really affects the reviewer's opinion and experience of the film, it will definitely affect the reviewer's overall rating.