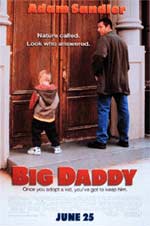 - for language and some crude humor.

Sonny Koufax (Adam Sandler) is an unsuccessful law student who leads a boring, carefree life as he works only one day a week as a tollbooth operator. All is fine till one day when his girlfriend Vanessa (Kristy Swanson) leaves him for being irresponsible and not doing anything with his life. When 5-year-old Julian (Cole & Dylan Sprouse) shows up at his door under the possibility of being Sonny's best friend, Kevin's (Jon Stewart), son, things begin to change. Sonny tells the social services he's Kevin to protect Kevin who just got engaged to his girlfriend. Sonny also realized he could show Vanessa he's responsible by having Julian in his care. Thus begins a long hard road as Sonny loses Vanessa, tries to return Julian, decides to keep him and tries to raise him as a single father.

This could have been an awesome movie. But don't get me wrong, I have to admit I really liked the film. But like with most reviews I do, I have some bones to pick and some info to warn you about...

Big Daddy is a semi-typical Hollywood comedy with what I no will call "The Liar Liar Twist." The LL Twist is a 90s Hollywood comedy filled with objectionable material, but with a decent/good message and some heart to the film. Allow me to elaborate.

In 1997's Liar Liar starring Jim Carrey, Carrey plays a lawyer who can't lie for a day due to his 5 year old son's birthday wish. The film is laden with the typical swearing and sexually-related humor. But the underlying message of the film is anti-lying and pro-family. In 1999's Big Daddy, a film in some ways more offensive (I'll explain shortly), Sandler's character Sonny learns responsibility and love through caring for Julian, resulting in a touching ending that although doesn't seem right for the rest of the film's content, it is rather needed to overcome the negative perverse humor.

The thing that offended me most about the movie were the 2 gay lawyer friends of Sonny's. In the beginning of the film the 2 guys actually kiss before departing a party. And whenever they're shown throughout the film, the audience is reminded in some way each time that they are gay (whether they're comparing themselves to Brad Pitt or having they're arms around each other). A segment/trait in the film that really could have been absent rather than included.

The language was pretty heavy with constant "s" words (at least a dozen), and "a" words, which some were used by the 5 year old boy. Also whenever Sonny and Kevin's fiancé' got engaged in a conversation, they were always bickering and calling each other names and Sonny relentlessly reminded her of her previous job at Hooter's restaurant (now with her being a dentist). So the terms "hooters," "boobs," and "hooterific" were used many times. Also, 2 characters issued the middle finger at 2 different times during the film. As such, the sexual innuendo/content was unfortunately present, especially when Sonny finds out Vanessa's cheating on him. Also, on another disappointing note, immorality is evident with the fact that Sonny and Vanessa were seen in bed together (just sleeping, but implying they have sex), Vanessa staying with another man, and Kevin admitting to having sex with a girl in Toronto after getting drunk at a party. All things that hindered the film from being better than it should have been.

The movie was very funny and enjoyable (especially when the gay guys weren't on the screen), and the presence of Julian never got annoying, but actually garnished plenty of "awwwww"'s from the crowd due to his pitiful cuteness. Gross humor prevailed once again. From Julian vomiting and it being shown falling to the floor and splattering to several scenes of Julian, occasionally accompanied by Sonny, peeing on a wall or a tree. And in the first scene where Sonny teaches Julian to do this, we see their urine streams, from behind them, running down the wall and pooling beneath them.

One plus were three cameos during the film. Rob Schneider was great as Sonny's immigrant delivery friend. Steve Buscemi was also great as a homeless man on the street. And Jon Stewart's role as Sonny's best friend was unfortunately short. Although all these cameos were present, their duration could have been longer.

Overall, the movie was rather good and entertaining, however, due to the sexual innuendo, cussing, and those darn gay guys, I can't grant this film more than somewhere around 3 stars, even though I'd like to give it a higher rating.

So, as usual, if you have any questions about the film before you see it, feel free to contact me.

Sex/Nudity: Aside from conversations with some lewd comments and innuendo, there isn't any sex/nudity.