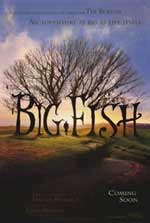 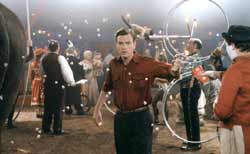 In the heartwarming film "Big Fish," director Tim Burton ("Batman," 'Edward Scissorhands") brings his inimitable imagination on a journey that delves deep into a fabled relationship between a father and his son. Edward Bloom (Albert Finney) has always been a teller of tall-tales about his oversized life as a young man (Ewan McGregor), when his wanderlust led him on an unlikely journey from a small-town in Alabama, around the world, and back again. His mythic exploits dart from the delightful to the delirious as he weaves epic tales about giants, blizzards, a witch and conjoined-twin lounge singers. With his larger-than-life stories, Bloom charms almost everyone he encounters except for his estranged son Will (Billy Crudup). When his mother Sandra (Jessica Lange) tries to reunite them, Will must learn how to separate fact from fiction as he comes to terms with his father's great feats and great failings.

If you've seen the original Batman film or perhaps Johnny Depp in Edward Scissorhands or even Sleepy Hollow, then you're familiar with director Tim Burton's dark and unique directing style. This year Burton brings to life the fantasy novel Big Fish, creating what can be easily labeled as one of the best films of 2003. The film's foundation is the story of a man named Will who's father Edward is renowned for his storytelling, and infamous for seldomly telling the truth. While Edward's health is declining, Will becomes desparate to get to know his father more personally as he tries to separate fact from fiction in Edward's tall tales. The film interweaves flashback stories from Edward's younger days as an adventurer -- stories Will recalls from being told them as a child. The balance between the dramatic real world and Burton's portrayal of Edward Bloom's fantasy world is beautiful. We really get a sense for Will's pain as he tries to figure out the real Edward Bloom and the tender interactions between the Bloom family members. The drama is so real and tangible, you're easily drawn into the character's lives. And the tall tales Edward tells are so entertaining and oftentimes enchanting that you hope to discover at the end that they were all true. 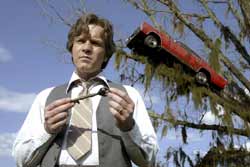 The acting in Big Fish is about as good as you can get. Ewan McGregor, most widely known for his role as Obi-Wan Kenobi in the newer Star Wars films, is charming and terribly believable as the larger-than-life Edward Bloom. Albert Finney does wonders as the elder Edward, while Jessica Lange also turns in a solid performance as his loving wife Sandra. Relatively newcomer, seen also in 2003 in Matchstick Men, Alison Lohman is a spitting image of Jessica Lange and does a great job as the younger Sandra. Billy Crudup, who usually stars in more independent or underground films is excellent as the sensitive son of Edward who just wants to know the truth about his father's life. Each supporting character Edward meets only helps to beautifully sculpt and shape the bizarre adventures he encounters.

Big Fish's content is pretty mixed for this type of film. While it could have effortlessly been edited down to fit a more family-friendly PG rating, the language is mercifully mild while violence is kept to one random brutal beating and some even more random butt nudity is seen. The nudity is especially unnecessary, so it's frustrating to wonder why it needed to be there. (Also, for those not too fond of spiders, there's a sequence where "jumping spiders" briefly attack young Edward but he just brushes them off -- a scene that's meant to be kind of creepy)

Content aside, Big Fish is a wonderful story with superb acting. This is Burton at his best! It's a shame more tall-tale fantasy films like these aren't made more often. The fantasy aspect had an almost Princess Bride feel to it to me. While it's not nearly as humorous or classic, Big Fish is a story that indeed has longevity and will be enjoyed for quite some time.

Sex/Nudity: We see a vision of someone on the toilet reading a magazine that has the Playboy bunny on the front. We see a nude woman standing in a lake -- we see her bare back and part of her bare butt above the water before she dives under water. We see her again later in the film swimming underwater and we see her complete bare backside. When she approaches a car window underwater, we see the silouette of her nude front. While telling one of his fairy tale stories, Edward makes a comment about someone "b*nging the milman". We see a trailer rocking back and forth, possibly from sex, but find out it's not. As Amos stands nude before Edward, we briefly see his bare butt.

Alcohol/Drugs: Some people make a toast with champagne.

Blood/Gore: A wolf tackles Edward and leaves three scrapes on his face. Don beats up Edward, kicking and punching him repeatedly. We then see Edward's face is bruised with blood around his mouth and on his teeth and blood near his eyes.

Violence: Bees and spiders attack Edward; a wolf jumps on and attacks Edward; a man beats up another man; an amusement park ride car disconnects and hits a man; Edward beats up some soldiers; etc Disclaimer: All reviews are based solely on the opinions of the reviewer. Most reviews are rated on how the reviewer enjoyed the film overall, not exclusively on content. However, if the content really affects the reviewer's opinion and experience of the film, it will definitely affect the reviewer's overall rating.